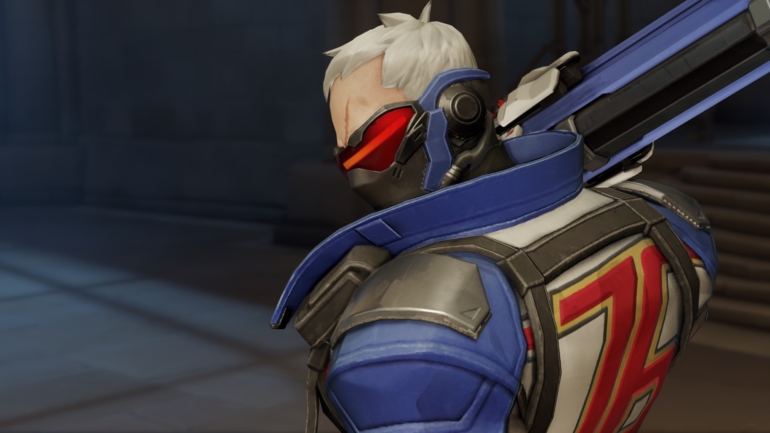 Jack Morrison was the commander of Overwatch in its glory days. Steadfast, by the book, and patriotic, Morrison sometimes went beyond to do what was necessary for the greater good.

But then, one day after the dissolution of Overwatch, he came to blows with former comrade and friend Gabriel Reyes at Overwatch’s Swiss headquarters. An explosion left nothing in its wake, leading the world to believe that Morrison and Reyes were both deceased.

Five years later, mysterious attacks began happening on shadowy corporations and former Overwatch facilities, with equipment being stolen in numerous occasions. That equipment came into possession by the attacker, a masked vigilante known as Soldier: 76, who was actually Morrison in disguise.

Using his new moniker and the tools at his disposal, Soldier: 76 began a personal war to expose the truth behind the end of Overwatch and bring those responsible to justice.

“Old soldiers never die, and they don’t fade away”

Soldier: 76 is one of Overwatch’s most basic and easy to learn heroes, giving many who have played an FPS a familiar playstyle to ease them into the ability-slinging and ultimate-using battleground. Unfortunately, Soldier: 76 has fallen out of the meta despite occasional buffs, but that doesn’t mean he can’t help a team achieve victory in certain scenarios.

He’s about as basic as you can find in this game when it comes to his abilities. He’s a man with a gun who can sprint and heal. He’s not a talking gorilla or a robot. He’s just a man who believes in justice.

Soldier: 76’s main tool of justice is his Heavy Pulse Rifle, an automatic rifle that deals up to 20 damage per bullet. It has damage drop-off, but as a hitscan hero, he’s integral for helping in taking down slippery foes like Tracer, Hammond, or Pharah.

The magazine of the rifle has 25 shots and his reload time is super short at 1.5 seconds, allowing him to constantly deal damage to anyone and anything on the battlefield. The main thing to keep in mind when trying to master his primary fire is that the spread increases the longer you hold down the trigger. This means that Soldier is only pinpoint-accurate in short bursts of three bullets, and will become most inaccurate at nine shots and onward.

Learning the cadence of Soldier: 76’s hitscan accuracy, on top of landing headshots, is the key to maximizing his damage potential. Most importantly, however, is positioning. A Soldier player who masters the high ground or keeps his distance while chipping away at his foes can turn a game around very quickly. The reason high ground is so important is that it gives Soldier: 76 a two-fold advantage. First, he’ll be able to land headshots easier because the head hitbox will be the most exposed part of his enemies. Second, many heroes in Overwatch don’t have vertical mobility, and that means Soldier: 76 can rain bullets down with relative safety.

While the Heavy Pulse Rifle is Soldier: 76’s bread and butter, the entirety of his kit is what makes him such a threat in a variety of situations.

Soldier’s alternate fire is his Helix Rockets, a linear splash projectile that launches three tiny rockets out of his rifle in a single burst. The attack has a three-meter area of effect, and it does 40 damage on a direct hit with 80 damage from the splash, for a potential of 120 total damage.

Helix Rockets are perfect for dealing out a lot of damage in a short amount of time, and it’s great for finishing off weak targets or firing into a crowd. Learning to become accurate with this ability will take your Soldier game to a whole new level since it can be devastating when used efficiently.

The first of Soldier: 76’s abilities is a Sprint, which ups his movement speed by 50 percent and sends him running. The effect is infinite, but it can be canceled by doing any other action besides continuing the Sprint. This ability is great for escaping from harm’s way, running back to an objective to contest it, or chasing down a weak enemy who’s trying to get away. A useful combination for accessing difficult-to-reach high ground is by combining the Sprint and Helix Rockets to propel Soldier: 76 to otherwise inaccessible locations. Sprint toward where you want to go, look down while continuing to run, jump, and quickly use the Helix Rockets at your feet to launch yourself. Be careful, however. It will damage yourself for 40 damage, so be sure you have enough health to use this tech.

Soldier’s other ability is Biotic Field, which places down a healing station on the ground that gives health to him and his teammates. The ability restores 40 health per second, and 204 health over its entire 5.1 second duration. This ability is good for supporting teammates, but works best when placing it down at your feet before or during a firefight. It can easily help give the extra boost of health you need to survive the encounter. It has a 15 second cooldown, though, so use it only if your healers are occupied or a health pack is not available.

“I can do this with my eyes closed”

Soldier: 76’s Ultimate is Tactical Visor, which grants him a special crosshair that automatically hits the target closest to its center. The reload time of the Heavy Pulse Rifle is nearly instant during its duration, which lasts for six seconds. This is just enough time to use two full magazines, so use it wisely.

This ability is deceptively powerful, and it takes some practice to get used to. It may seem like it’s just an aimbot that hits targets, but target acquisition and prioritization are both important when it comes to Tactical Visor.

Using this Ultimate can just as easily clear the field of enemy combatants as it can do next to nothing. It’s important to use the ability to focus down squishy, hard to hit enemies like Genji and Tracer, or Support heroes like Mercy and Zenyatta.

Damage falloff still happens with Tactical Visor, so the closer you are to your target, the better. Don’t waste the bulk of your six seconds firing away at an enemy who’s across the map when you could be doing a lot more damage to someone who’s closer to you.

Combining this ability with damage boosts from Ana or Mercy will make it a true force to be reckoned with, but it’s also quite easy to avoid. Soldier telegraphs the move very loudly as he yells “I’ve got you in my sights,” giving enemies time to seek cover behind a shield or a wall, or just bail altogether. D.Va’s Defense Matrix can also be a nightmare as it can eat a bunch of the bullets coming from his gun. If there’s a Reinhardt or a Winston on the enemy team, be sure to keep track of their shield health or cooldown, and find the perfect time to strike.

Soldier: 76 is one of Tracer’s strongest counters since he combines hitscan firepower with the ability to one-shot kill her with well-placed Helix Rockets. Plus, his Biotic Field can keep him alive while she does her blinking thing.

If an enemy Pharah is giving your team trouble, consider switching to Soldier: 76 to use his hitscan bullets to take her down from the skies. Accuracy is key.

If either one of these heroes are giving you trouble, Soldier can help out in a big way due to his range of DPS. An accurate set of Helix Rockets can do massive damage to both.

While Soldier can be helpful against Genji, a good cyborg ninja will time his Reflect ability well and be able to turn the tide against Soldier: 76 by closing the gap quickly.

Soldier will have a difficult time escaping Mei’s slowing abilities, and she’ll be able to kill him quickly with one freeze and a well-placed icicle headshot. Keep distance and bait out her Iceblock before committing to a full fight.

Soldier’s only chance against an accurate sniper is to hit them with some Helix Rockets. If not, his head can be taken off just as quickly.

The three-tank, three-healer composition was the bane of DPS’ existence for quite some time. But with nerfs to both tanks and supports in the composition and healthy buffs to some DPS heroes, Soldier: 76 may be back. In a triple or quadruple DPS composition, Soldier: 76 is a solid choice as a self-preserving and damage-dealing character that a healer can leave in good conscience to focus on other heroes that can’t self-heal.

Soldier: 76 is a hero that anyone who plays Overwatch should get familiar with since he teaches the basics of the game purely by his kit and playstyle. Although he’s not viable in all situations, Soldier: 76 can be terrifying in the right hands. He’s a consistent damage dealer, a supplemental healer, and a nightmare from the high ground.