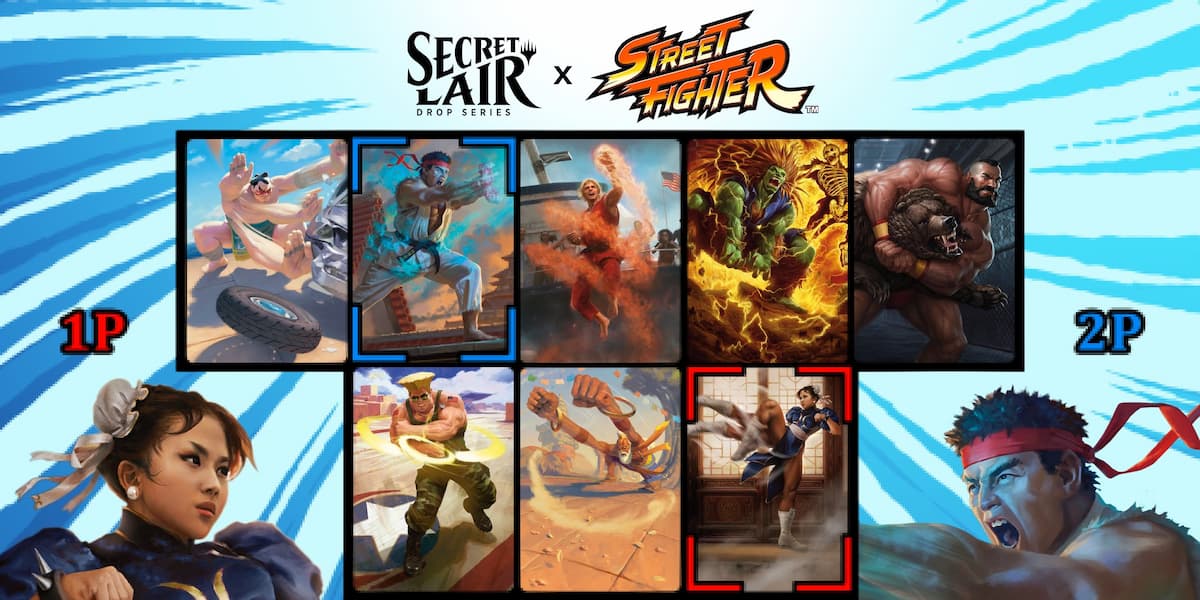 Street Fighter fans just got a lot more to look forward to, as Capcom confirmed that its crossover with Magic: The Gathering Secret Lair will be fully revealed during the Capcom Pro Tour 2021 Season Final.

Secret Lair is MTG’s Drop Series, which means each drop contains specially curated cards that feature art, characters, and ideas you may not see anywhere else, including crossovers with other franchises. Additionally, each Drop Series is only available for a limited time, which is typically around one month after being fully revealed.

This MTG crossover with Street Figher was initially revealed last August and accompanied plans for similar promotions with Fortnite and Warhammer 40,000. Each drop includes new-to-Magic cards designed around a handful of iconic characters, with the official Street Fighter Twitter giving fans a glimpse at most of the artwork in an exchange with the Secret Lair account.

Some of the cards were also seemingly leaked and then somewhat confirmed yesterday by Street Fighter‘s official Japanese Twitter account, along with the official reveal announcement.

With this Secret Lair x Street Fighter drop, players will be able to pre-order cards themed around characters like Ryu, Chun-Li, Ken, Blanka, Dhalsim, Zangief, E. Honda, and Guile from Feb. 18 to March 18 on the Secret Lair website. Wizards of the Coast will also showcase the drop in-depth during the CPT 2021 Season Final broadcast.

The action begins at 6pm CT on Feb. 17 with the No Neutral 5v5 Street Fighter V: Champion Edition exhibition team tournament and will run through Feb. 20, where another reveal from Capcom may be shared that involves an ongoing countdown timer on Capcom’s website.