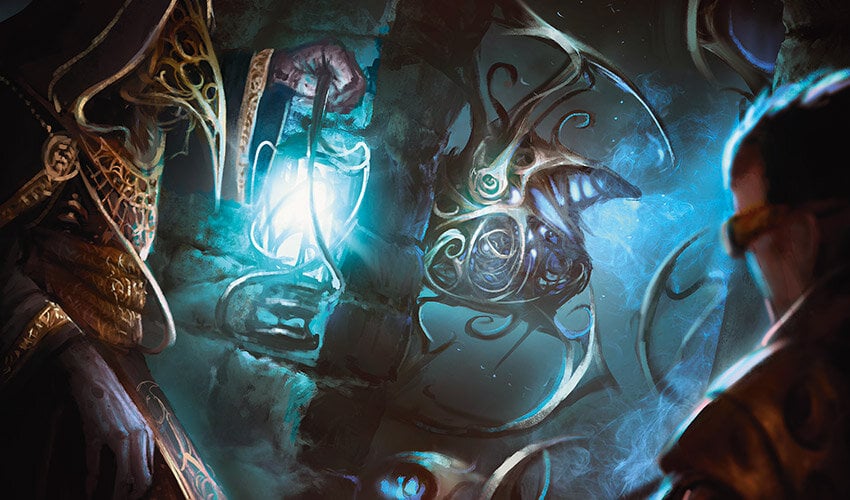 The release of Magic: The Gatherings new set, Modern Horizons introduced and revamped tons of powerful cards, and a whole lot of new artwork by long-term and new MTG artists.

Magic: The Gathering fans understand there’s more to the game than competing, deck building, and winning. There’s also an appreciation of the amazing art attached to each card and the storyline behind it.

Modern Horizons produced plenty of amazing cards outside of the Standard format, giving Commander, Modern, and even Legacy a healthy competitive boost. Contained within the 250 plus card set are 10 cards with artwork that can’t be ignored.

From artists like Terese Nielsen and Seb McKinnon to Zach Stella, here are the cards with the best-featured artwork from Magic: The Gathering Modern Horizons set.

Despite personal views and controversial comments made in the past by MTG artist Terese Nielsen, the artwork featured on Echo of Eons is spectacular. Nielsen’s first MTG set she did card art for was Alliances, and she’s been knocking out stunning work ever since.

New Magic: The Gathering artist Mitchell Malloy had three total cards printed in Modern Horizons, with Cabal Therapist ending up as a feature card for the set. With a total of 10 MTG drawn by Malloy, his styles are a treat to the eye and will likely be around for years to come.

Having a stunning Tezzeret card in MTG Core Set 2019, Zack Stella continued to impress with his Dead of Winter interpretation in Modern Horizons. Stella has also done work with Teferi, Chandra, and even Liliana.

Veteran Magic: The Gathering artist Jason Felix knows how to capture a story within an image and Splicer’s Skill is his most recent addition within Modern Horizons. And who better than Felix to bring the proper flavor and history into Splicer’s Skill.

Fantasy illustrator Jason Rainville throws his passion into projects for Magic: The Gathering and Dungeons and Dragons to create the ultimate image for a creature or card. Much like he did with the Modern Horizons card, Mind Rake.

Creating alternate visual attractions in fantasy and video games, Anthony Palumbo and his artwork attached to Settle Beyond Reality was a hit the moment it was spoiled. Blowing minds in the Magic: The Gathering community, Palumbo entices fans beyond the flavor of the text.

Joining the MTG artist team during the M13 set, Seb McKinnon is kicking out wild lines in Modern Horizons with Steam of Thought. After his rendition of Deliver Unto Evil in War of the Spark, Mckinnon manages to impress fans with his skills and talent.

The artist behind Trostani Discordant and Tarkir, Chase Stone shows off his skills through one of the most potent planeswalkers in Modern Horizons, Wren and Six. Adding another notch in his belt, Stone did the artwork featured for the promotion of Magic: The Gathering new Netflix series.

From video games to fantasy illustration, Sam Burley is behind the best land card image in the Modern Horizons set. The flavor text added to Prismatic Vista reads, “There is beauty in the uncertainty of potential.” And with Burley’s interpretation, this statement rings true.

Dabling in filmology, horror, and fantasy while creating for MTG and D&D,Paul Scott Canavan shows off what true power looks like in Force of Negation. The artist behind Aurelia, the Warleader and Planebound Accomplice, Canavan knows how to tell a story within his lines. He’s also a recent addition to the MTG art freelancing team, starting with the M19 set.

Illustrated by Anna Steinbauer, the artist behind two of the new Chandra planeswalkers in Core Set 2020.

Illustrated by Jedd Chevrier, a newer artist on the Magic: The Gathering team.

Illustrated by Niles Hamm, who has drawn over 140 cards for Magic: The Gathering over the years.

Magic: The Gathering Modern Horizons set is available on Magic Online. The set release date for booster packs and paper cards is June 14.