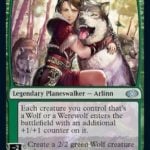 Wizards of the Coast has included a total of 45 anime art cards within the Jumpstart 2022 set, showcasing a number of Magic: The Gathering cards that are worth money on the secondary singles market.

Packed with popular MTG tribal themes throughout history, the Jumpstart 2022 (J22) set contained 51 new cards, reprints, 46 themes, and 121 possible pack contents. In addition to the 45 anime art cards, there were another 25 that showcased new art. And that doesn’t include art on new cards, like the Mythic Rare J22 promo Kibo, Uktabi Prince, of which the monkey noble is worth around $23 to $25.

Of the 45 J22 anime art cards, several were worth around $20 for the global release of Jumpstart 2022, ranking higher than the regular reprints found in the set.

Several J22 anime art cards saw an increase in price after the holidays, like Balan, Wandering Knight which is priced at around $30. Others that were under $2 to $3 have since dropped to under $1.

The J22 anime cards priced above $10 aren’t the only Jumpstart 2022 cards worth money. Several reprints and new cards are making waves on the secondary market, legal to play within Eternal MTG formats like Commander.

All J22 values are subject to change, at which point prices will get updated. The Jumpstart 2022 set officially launched on Dec. 2.

Update Dec. 2 9:45am CT: All prices for Jumpstart 2022 anime art cards were updated for the global launch.