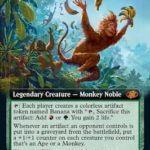 Wizards of the Coast stepped up the quality of Magic: The Gathering content within the Jumpstart 2022 set, showcasing 46 tribal themes with a number of reprint and new cards that are worth money on the secondary singles market.

The Jumpstart 2022 (J22) set is the second independent Jumpstart set in Magic, containing 46 themes and 121 variations as pack contents. WotC included 51 new cards in addition to the reprints from various MTG sets. And 45 of the total J22 cards were given anime art, with several of them having a value of over $20 for the global launch.

Each pack within the J22 set contains at least one Rare or Mythic Rare, of which over a dozen are worth money on the secondary market prior to the official release. Popular themes that were slotted into Jumpstart 2022 included Merfolk, Goblins, Snow, and Eldrazi.

Ashcoat of the Shadow Swarm

Rhystic Study is a Blue Enchantment that allows its controller to draw a card whenever an opponent casts a spell at the cost of one mana of any color. The price history for the Enchantment is quite high and it was in the first Jumpstart set, where it is valued at $38. The J22 version has new art and at launch was worth between $35 and $45.

Balan, Wandering Knight is a reprint from Commander 2017 and is one of the 45 Jumpstart 2022 cards that feature anime art. The legendary cat knight at launch was valued at around $25 to $32, despite its Commander 2017 version having a value of only around $6.

Tree of Perdition is another J22 anime art card that was first printed in Eldritch Moon. It’s an interesting plant creature that’s a Defender with 0/13 stats. And it can tap to exchange its toughness with an opponent’s life total. Previous versions of Tree of Perdition are valued under $20, with the J22 version worth around $19 to $25.

Pirated Copy is a new MTG card within the Jumpstart 2022 set. The shapeshifter pirate becomes a copy of a creature on the battlefield and can draw cards. Pirated Copy is a Mythic Rare valued between $17 to $20.

Synergizing with Snow as a new MTG card in J22, Isu the Abominable lets players play and cast Snow lands and spells from the top of their library. The Mythic Rare can also scale in power through +1/+1 counters upon paying either Green, White, or Blue mana. Isu the Abominable is valued at around $20.

Karn Liberated is a staple planeswalker within the Commander format, having numerous reprints over the years. And this isn’t the first time the planeswalker has received an alternative art treatment from WotC. At the release of J22, Karn Liberated’s anime foil version was valued at around $15 to $20.

Kiki-Jiki Mirror Breaker is one of the most popular cards in multiple Magic formats right now, including Commander. Various reprints are worth around $20 on the secondary market, with the J22 anime foil version valued at around $15 to $20 at launch.