Makes for a good pairing with reprinted Leyline enchantments. 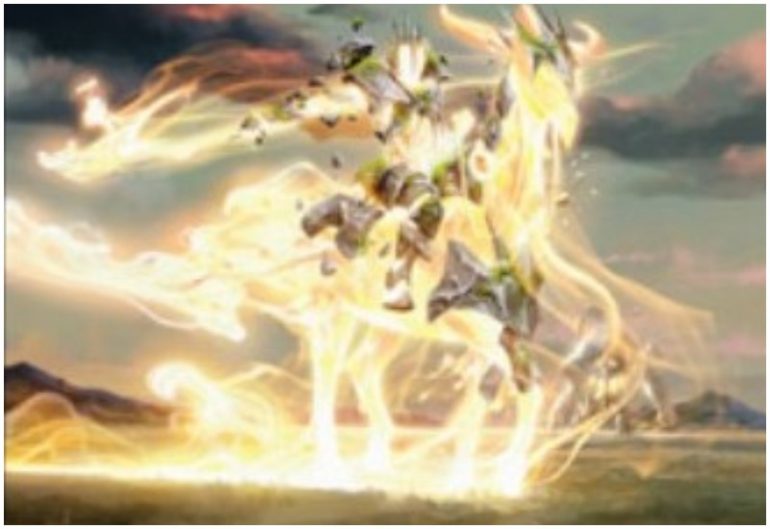 Every once in a while, a Magic: The Gathering set will have a White stompy creature worth playing in Commander or Standard. And for the M20 set, it’s Cavalier of Dawn.

Since spoilers for Magic: The Gathering Core Set 2020 began earlier this week, the set’s been blowing up with insane instants, multi-colored legendary cards for Commander, and now, a good old-fashioned White stompy.

The M20 set is different from previous Core Sets, containing 280 reprints and new cards (more than usual) and a host of cards designed specifically for Commander in addition to Standard and other formats. But with Cavalier of Dawn, it’s back to the basics with a traditional stomp in your face play.

Costing five mana (triple white) to cast, Cavalier of Dawn is a Mythic Rare four/six with vigilance. The triple white mana cost could hurt it when trying to add to various archetypes, but the abilities attached to Cavalier of Dawn might make it worth it.

Upon entering the battlefield, Cavalier of Dawn creates a three/three golem artifact token. And when it dies, a player may return a target artifact or enchantment to their hand from the graveyard.

Orzhov decks likely will pass or put a Cavalier of Dawn in their sideboard but Azorious Mid-Range and Control decks could justify main deck play. Cavalier of Dawn isn’t a win-con creature but it does have potential, especially when paired with an M20 Leyline enchantment.

Magic: The Gathering Core Set 2020 is set to release on July 12, with MTG Arena and Magic Online releasing on July 2. An M20 pre-release Draft will also take place from July 5 to 6.