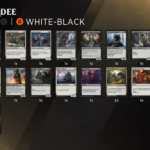 Heading into the first day of the MTG Worlds competition, Blue and Black were considered the strongest colors within the MID Limited Draft format. But not to be taken out of the equation was the color White, especially when paired with Blue or Black.

Sperling pulled off a 2-1 record with UB, as did Ikawa with WU, two strong builds within MID Draft. Mori and Rei Sato were the standout competitors with a 2-1 record after three rounds, both running three colors their decks. And the 2020 World Champion Damo da Rosa kept himself towards the top- eight of the day with his WB deck.

Huschenbeth got stuck on what many consider the worst color pair in Draft, RG. He still managed to earn one win with the deck and had a chance to grab a second win in his third game against Kassis. But the cards were not in his favor, especially after Kassis milled three of the lands he desperately needed. Huschenbeth was cool as could be until the lands hit the graveyard, expressing to the camera what every viewer was thinking.

Only two players went 0-3 in the MID Limited rounds: Keisuke Sato and Takahashi. Cifka also had a rough Draft, getting stuck in RB like Keisuke Sato, but pulled off one win. Manfield went 1-2 as well after getting chased off Blue and forced into GW.

Two Standard Constructed rounds remain during the first day at the 2021 Magic World Championship. Five more rounds of Standard will take place on day two, determining the top four who advance to the MTG Worlds finals on day three.