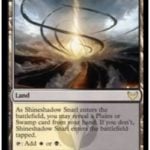 Duel lands revealed today by Wizards of the Coast for the upcoming Strixhaven: School of Mages set completes a Magic: The Gathering cycle of lands first introduced in Shadows over Innistrad.

A cycle of enemy color lands in Strixhaven: School of Mages (STX) will enter the battlefield tapped unless the player reveals a corresponding basic land type from their hand. Set to release in April, the duel lands went from Shadow lands in SOI to Snarls in STX. A Snarl, according to WotC, is a phenomenon of two opposing mana in one vortex.

There are a total of five Snarl lands in STX, corresponding with the five colleges at Strixhaven University.

Snarl lands, just like Shadow lands, enter the battlefield tapped unless its controller is able to reveal a basic land with the same color of the Snarl land from their hand. Each of the STX lands has a rarity of Rare, and might not see a large amount of gameplay in Standard Constructed. Snarl lands aren’t as good as Pathway lands from ZNR, and Pathways don’t have a basic land title like Swamp or Mountain.

The finished cycle of lands will have a major impact within STX Limited, though. Much like the Snow lands in KHM, Snarl lands will likely be a mid-Draft pick worth grabbing. And having mana-fixing within Sealed is always nice too, especially with the inclusion of Mystical Archive cards in STX Draft booster packs.