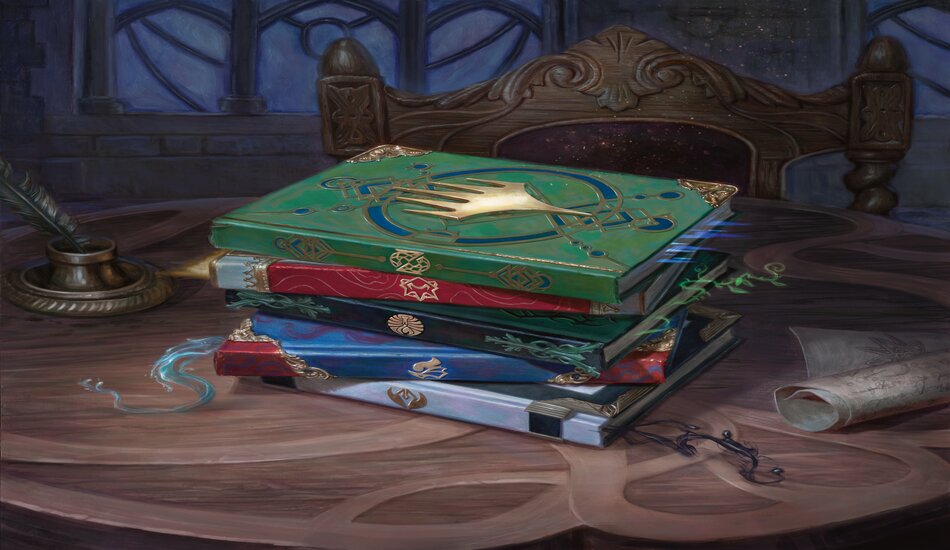 School is in session for Magic: The Gathering players with the upcoming release of Strixhaven: School of Mages.

Containing a total of 275 cards, the Strixhaven (STX) set is scheduled to be released in April. Located on the plane of Arcavios, Strixhaven University is where the elite students from the Magic multiverse attend school to hone their skills. The university allegedly contains a copy of every spell within the multiverse, housed within the Biblioplex.

There are five colleges on the Strixhaven campus—each founded by a dragon and represented by an enemy color pair. Each college has a specific field of study that fuels an academic rivalry between all five schools.

Students starting at a Strixhaven University are known as “first-years,” while those who have chosen a college are considered apprentices. And each college contains a professor who’s also the face card of one of the five STX Commander preconstructed decks.

Focusing on the mathematical aspect of Magic, the Quandrix College was founded by the dragon Tanazir Quandrix. Students study patterns and symmetries to tap into the power of nature. Mages attending Quandrix can warp reality with numerical truths. The mascot of Quandrix is creatures made out of living fractals with a motto of “math is magic.”

With a mascot of Pests, Witherbloom students draw power from the essence of living things. Founded by the dragon Beledros Witherbloom, mages within Witherbloom can draw out souls of living creatures via their mastery over life and death. It’s an ideal environment for a necromancy professor, where the former Strixhaven student Liliana teaches in disguise. Preferring a swampy environment, the motto for Witherbloom College is “get your hands dirty.”

Lorehold College was founded by the dragon Velomachus Lorehold with a focus of study on the history of magic. Mages who attend Lorehold bring the past back to life to learn, whether it’s historical figures or haunted monuments. Students who attend Lorehold are a combination of researchers and adventurers, RW, with a motto of “leave no stone unturned.” The mascot of Lorehold college is the Spirits.

Using the eloquence of words, Silverquill students study the manipulation of living ink. Founded by the dragon Sharix Silverquill, the mascot of the college is none other than inklings. Silverquill students conjure spells via speeches and the art of reciting and are considered to have the sharpest of minds, which fits their motto of “Sharp style. Sharper wit.”

Founded by the dragon Galazeth Prismari, students of the Prismari College are trained in the elemental arts. With a “go big or go home” mentality, Prismari mages are often raw and over-the-top. The Prismari College is home to the Kenrith twins, Rowan and Will, Planeswalkers last seen in ELD who are seeking to discover more about themselves. And their professor, Zaffai, is the maestro of the Arcane orchestra. The motto for Prismari College is “express yourself with the elements.”