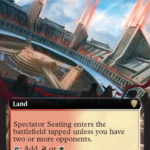 The Battlebond set was released in 2018, favoring ally colors, which led to the first cycle of ally Crowd Lands. These dual lands were unique as they “enter the battlefield tapped unless you have two or more opponents.” The original ally Crowd lands from Battlebond were Sea of Clouds, Morphic Pool, Luxury Suite, Spire Garden, and Bountiful Promenade.

Since the release of Battlebond, Verhey has wanted to print the enemy Crowd Lands cycle, which became achievable via Commander Legends.

“The moment I made the original cycle of these, I knew that we’d want to do the others someday,” Verhey said. “Where should they go? Commander Legends was the obvious answer.”

Each of the lands features artwork from the plane Kylem, revealed first via the Battlebond set. And since the enemy Crowd Lands in Commander Legends are nonlegendary rares, the cycle of dual lands also has extended-art versions as well.