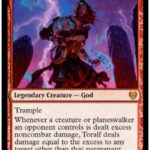 A variety of Mythic Rare Norse-themed Gods will return to Magic: The Gathering in the upcoming Kaldheim Standard-legal set as Modal Double-Faced cards.

A total of 12 Gods are featured within the Kaldheim (KHM) set, with five as Mythic Rare Modal Double-Faced cards (MFDC) and five as Rares. The Mythic Rare Gods are Valki, Halvar, Alrund, Toralf, and Esika. Each of these Gods has a backside that features legendary Artifacts, enchantments, a creature, and even a planeswalker. Gods within the KHM set aren’t indestructible, unlike Gods from previous Magic sets.

Halvar, God of Battle happens to be quite sensible. He’s able to cut through the Cosmos with his sword, which is featured on the backside as the Sword of Realms. Halvar created the legendary Artifact sword and is likely the Kaldheim version of Baldr due to his honorable and selfless traits.

Alrund, God of the Cosmos

Based on Odin from Norse folklore, Alrund, God of the Cosmos is the God of Wisdom who often disguises himself as a human named Asi. The backside of Alrund features his trusty Cosmic raven, Hakka, Whispering Raven, who can fly between the 10 realms of Kaldheim. Alrund uses Hakka to spy for knowledge while his “extensive knowledge cam by battling the Cosmos monsters,” according to the WotC Kaldheim guide.

Esika, God of the Tree is the god of the World Tree within Kaldheim. The backside of Esika features The Prismatic Bridge, an enchantment that supports the legendary theme within KHM. Esika is also the creator of the Cosmos Elixir, which provides the gods of Kaldheim with their powers.

Similar to Thor from Norse folklore, Toralf, God of Fury wields a powerful hammer. His weapon of choice is featured on the backside as Toralf’s Hammer, a legendary Artifact. Not to be confused with Thoralf Severin, a Magic Rivals League player, Toralf is an adventurer who enjoys taking risks. He’s also known as the God of Thunder within the Kaldheim lore.

Players can test out the cycle of Mythic Rare MDFC Gods when the KHM set releases digitally on Jan. 28. The official tabletop release is scheduled to take place on Feb. 5.