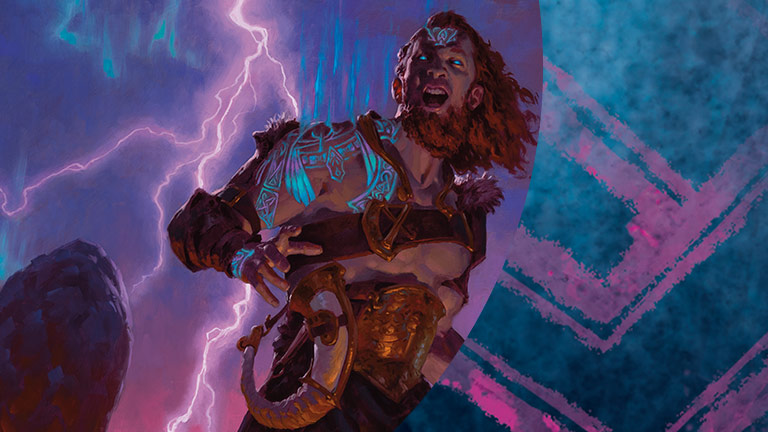 The most recognizable figure from Norse mythology for many people is Thor and his weapon Mjölnir. The God of Thunder has received a boost in popularity by the Marvel comics superhero based on him.

For that reason, many people in the Magic community were looking forward to what the Magic interpretation of Thor would look like. And on the fifth day of Kaldehim spoiler season, Wizards announced Toralf, God of Fury // Toralf’s Hammer today.

The mythic rare modal double-faced card brings Thor and Mjölnir to Magic. The card is a massive flavor win and continues the exploratory design that Kaldheim is filled with. 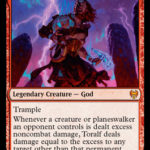 Toralf is a sturdy body with an ability that allows for single-target removal to take down multiple creatures. If you cast Lightning Bolt on a 1/1, the two excess damage could be dispersed to another creature. This will work well with Shatterskull Smashing. With the help of Toralf, Shatterskull Smashing could become a full-on board wipe in the late game by spreading the excess damage around. A 5/4 trample creature is effective as an attacker, which makes the card playable outside of its ability.

Toralf’s Hammer isn’t that good, though. While Toralf might see a decent amount of constructed play, the equipment side of the card won’t show up outside of Limited. But the equipment will be powerful in Limited. A repeatable three damage can take care of pesky blockers or a crucial value-based legendary creature. The flavor of a stat boost only going to legendary creatures is superb. This represents Mjölnir only being able to be picked up by someone who’s worthy.

Take control of the God of Thunder when Kaldheim is released on Magic Arena and Magic Online on Jan. 28. The expansion’s full release is set for Feb. 5.