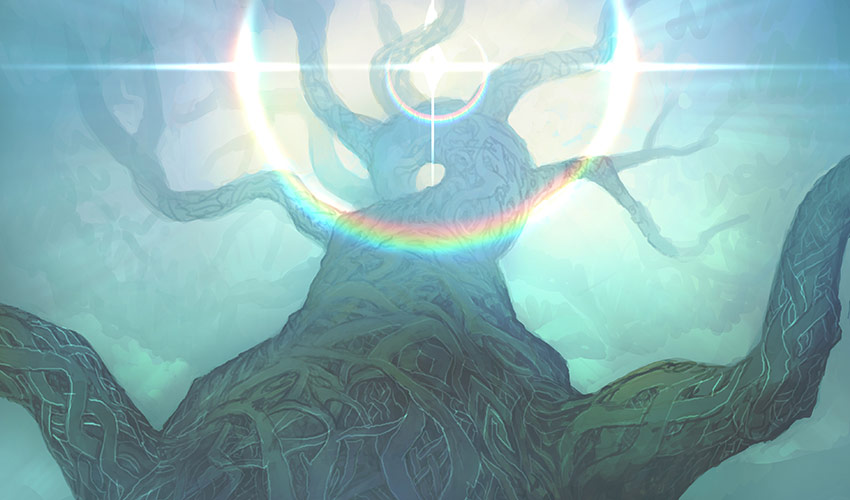 The cycle of modal double-faced Gods in Magic: The Gathering’s upcoming Kaldheim set is bringing powerful cards based on the design that made its debut in Zendikar Rising.

The double-faced mechanic expands the ability to play differently depending on the matchup at hand. Esika, God of the Tree // The Prismatic Bridge, announced today by Wizards of the Coast, is another addition to the cycle and could be the most powerful one revealed to date.

Accompanied by colorful, mesmerizing art by Johannes Vess, this mythic rare double-faced offering is a boon to the legendary matters theme within Kaldheim.

Esika, God of the Tree // The Prismatic Bridge 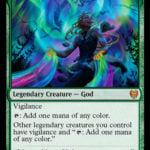 Casting a five-color spell isn’t hard in Standard. There’s plenty of mana ramp and color fixing, as shown by how prevalent Genesis Ultimatum is despite a GGUUURR cost. The colors can be found to cast The Prismatic Bridge and the card is worth the effort.

The past two years of Magic have shown players that free spells are good. That might seem like a simple statement, but Once Upon a Time, Genesis Ultimatum, and Fires of Invention hammered the point home in Standard. In a dedicated five-color deck that leans green, The Prismatic Bridge is a finisher. Getting a free creature or planeswalker every turn is obviously good. Filling the deck with non-creature ramp spells limits the number of times the card whiffs.

Even when The Prismatic Bridge hits a Lotus Cobra, Elvish Visionary, or Beanstalk Giant, that doesn’t matter because they’re excellent cards. Esika, God of the Tree is a fine creature, too. It’s a nice three-mana mana dork that synergizes with any other legendary creatures you may control. The 1/4 body shouldn’t be overlooked. In an aggro matchup, it’ll be more useful to drop Esika early as a hefty blocker.

The ideal deck for Esika, God of the Tree // The Prismatic Bridge could be a dedicated ramp deck with a handful of large one-off finishers to hit off The Prismatic Bridge. The utility creatures will be strong enough on their own to justify their inclusion.

You can use all five colors in Magic to win the game with The Prismatic Bridge when Kaldheim joins Magic Arena and Magic Online on Jan. 28. The expansion is scheduled for a full release on Feb. 5.