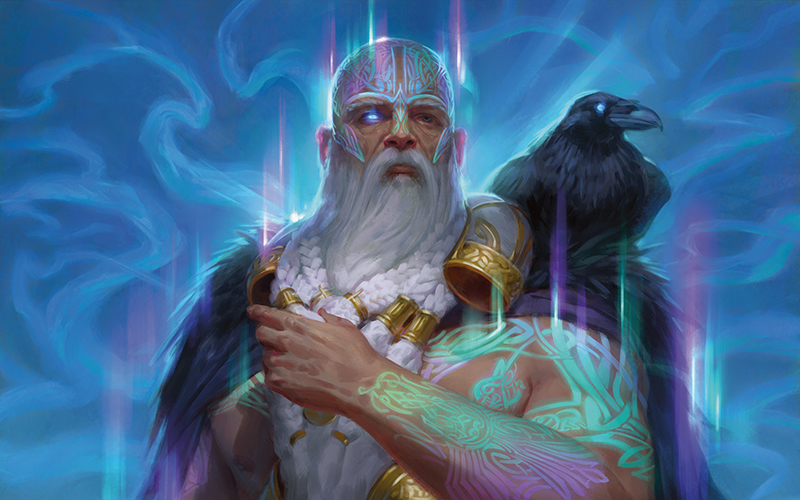 Odin is one of the most revered gods in Norse folklore, so it’s no surprise that Magic will have its own interpretation of the All-Father in the Viking-inspired set Kaldheim.

Alrund, God of the Cosmos // Hakka, Whispering Raven is a mythic rare modal double-faced God in Kaldheim. The flavor of this card is on point with one side being a raven, which is the animal Odin is traditionally associated with. Other than the flavor win of the card, the practical gameplay applications are intriguing too.

The synergy between the two halves is among the best for these modal double-faced cards. Hakka could be played on turn two, attack on turn three, and then on turn five Alrund enters the battlefield. The ability to play Hakka as an early threat or blocker and get it back to cast Alrund later is solid flexibility. For this card to succeed in Standard, Alrund will need to prove its power. Five-mana 1/1 aren’t good base stats. It can grow bigger with more cards in exile from Foretell, but generally, you’ll want to cast these cards so Alrund gets weaker as the game goes on.

The card advantage from Alrund’s end step trigger is the real value of this card. It does require some deckbuilding setup. For Alrund to consistently hit off this ability, you’ll want a large number of cards that share a type. If that requirement is met, Alrund becomes an excellent card advantage engine. It’s best to keep some cards in exile to give Alrund a stat boost. It’d be disappointing to pay five mana and have Alrund die to a Stomp or Spikefield Hazard.

MTG players will get a chance to find the best shell for Alrund when Kaldheim is released on Magic Arena and Magic Online on Jan. 28. The expansion’s full release will be on Feb. 5.