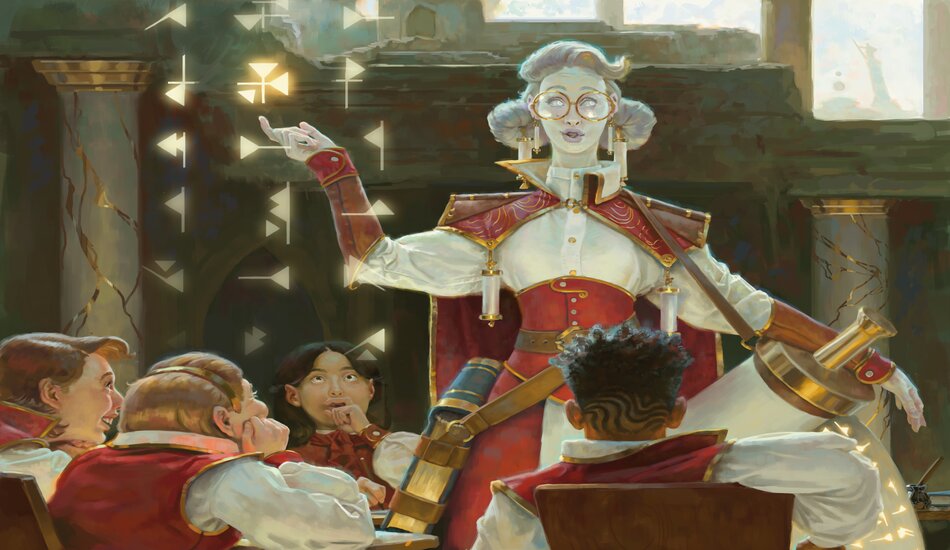 Wizards of the Coast has included a number of new and returning Magic: The Gathering mechanics within the Strixhaven: School of Mages Standard-legal set.

Scheduled for a digital release on April 15, and tabletop on April 23, Strixhaven: School of Mages (STX) contains a total of 275 cards. The new Standard-legal set has a magical school theme, showcasing five colleges at Strixhaven University that are represented by two Magic colors at odds with one another. Mechanics within the set are Modal Double-Faced cards (MDFC), Magecraft, Ward, and Learn/Lesson.

Magecraft is an ability word, a mechanic in Magic that thematically ties cards together with a common function. Ability words are always printed in italics, separating them out from MTG Keywords. Focusing on spells, Magecraft is thematically connected to the overall STX focus of college life for mages.

Magecraft is triggered upon its controller casting an Instant or Sorcery spell. Upon being cast, cards with Magecraft will offer that controller a bonus. A bonus can be card draw or a stat pump until the end of turn. Players can activate Magecraft with an Instant spell at any time, but Sorcery spells can only be cast on the controller’s turn. On the first day of STX spoilers, a total of 10 cards were revealed to have Magecraft—from Planeswalkers to creatures.

First introduced in ZNR, head designer Mark Rosewater has confirmed that not all sets will contain MDFC’s. The addition of MDFC’s within Strixhaven ties three sets—ZNR, KHM, and STX together—via the mechanic, similar to Magic block models of the past.

Much like KHM, MDFC’s within STX will have a rarity of Rare or higher. Gods in KHM were a cycle of MDFC’s, thematically tying the mechanic to the theme of the set. The same is done in STX, with a cycle of Deans representing the five colleges of Strixhaven University.

The new Learn/Lesson mechanic in STX may see some Standard Constructed gameplay but will get fully utilized within the Limited format. Thematically tied to the colleges of Strixhaven University, Learn will appear on a variety of Magic cards—from creatures to Instant and Sorcery spells.

Learn lets players either access a Lesson card from outside the game (within a player’s sideboard) or discard a card and draw a card. Lessons are Sorcery spells in all Magic colors. Players are guaranteed at least one Lesson in each STX Draft booster.

Ward is a new evergreen Keyword in Magic that is a triggered ability. Permanents that have Ward are triggered when they become the target of a spell or ability that an opponent controls. The Ward mechanic provides players with an extra layer of protection, countering an opponent’s spell or ability unless that player pays an additional cost.

Should an opponent cast a spell or activate an ability that doesn’t target, it won’t trigger Ward. Adrix and Nev, Twincasters are a solid creature card within STX to have the Ward mechanic. Able to pump out tokens, opponents will target the twins to prevent getting overrun. But unless that opponent has the mana available, Ward will protect Adrix and Nev.