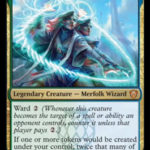 Casting a spell on a master wizard is probably a difficult task. So it makes sense that MTG’s Strixhaven: School of Mages set will have a mechanic that makes an opponent’s targeted spells a little worse.

Ward is a new keyword introduced in Strixhaven that taxes an opponent for casting a targeted spell on a creature with the ability. Here’s the official reminder text for Ward: “Whenever this creature becomes the target of a spell or ability an opponent controls, counter it unless that player pays two mana.”

Ward should be familiar to longtime Magic players. It’s the same ability found on Frost Titan, but now it’s a keyword. Ward is a powerful tax mechanic. Two extra mana to cast a removal spell is enough to disrupt a turn. The difference between casting Heartless Act for two mana or four mana is significant.

Today is the first day of Strixhaven spoilers and three cards with Ward have been revealed. Two are Standard legal and one is a part of the Strixhaven Commander preconstructed decks.

Adrix and Nev, Twincasters is the face of the Quandrix preconstructed Commander deck. Commander players will love this spell and it might even sneak into Legacy. A four-mana 2/2 Creature is fragile, but Ward helps protect it. What makes Adrix and Nev strong is the ability to double token generation. This will lead to massive battlefields and will be a key commander for Blue and Green token decks.

This is a fine Common. A 3/1 Flying Creature with Ward is hard to deal with. If there’s a deck that cares about Ward, this could be a real problem for opponents with no Fliers and a hand of removal that’s suddenly too expensive. 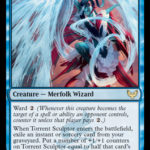 Flamethrower Sonata is a loot effect that rewards you for discarding an expensive spell by dealing damage to a creature or planeswalker based on that spell’s mana value. It’s a two-mana spell that can punch above its weight.

Strixhaven will launch digitally on April 15 with a tabletop release scheduled for April 23.