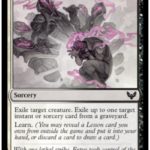 A total of five Instant and Sorcery Strixhaven: School of Mages cards of the Common rarity were revealed today by Wizards of the Coast, showcasing the new Magic: the Gathering Learn/Lesson mechanic and the impact it’ll possibly have on the Limited format.

WotC announced the new Strixhaven: School of Mages (STX) mechanic, Learn/Lesson, yesterday via Instant and Sorcery cards like Expanded Anatomy, Confront the Past, and First Day of Class. The mechanic is tied to the set thematically, highlighting college life at Strixhaven University.

Learn allows players to reveal a Lesson card from outside the game (sideboard) and put it into their hand. That player can also choose to discard a card and draw a card instead with the mechanic Learn. Each Draft booster in STX will contain at least one Lesson.

Enthusiastic Study is an Instant combat trick in Red, pumping a creature +3/+1 while having it gain Trample until the end of turn. With a CMC of three (2R), it’s a little on the expensive side to be used as just a combat trick. But Learn improves Enthusiastic Study’s overall value, gaining two cards for one spell cast.

Guiding Voice is another MTG Sorcery staple that adds a +1/+1 counter to a creature at the cost of one White mana. It’s the type of card players might pick up later in a Draft, using it with counter synergy. For one mana, players can access their sideboards early in the game, potentially gaining a huge advantage over their opponent within the Limited format.

The new Learn/Lesson cards within STX are scheduled to digitally release on April 15 and via tabletop on April 23.