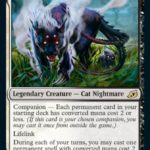 A new Magic: The Gathering mechanic, Companion, is causing havoc in formats from Standard and Limited to Eternal.

Wizards of the Coast introduced the Companion mechanic via Ikoria: Lair of Behemoths and it’s likely disrupting the game even more so than when planeswalkers were first introduced. Prior to the set’s digital release on April 16, Lutri, the Spellchaser was banned from Brawl. And in the Lotus Box MTG Arena tournament that took place just a few days after the launch of IKO, the top-four Standard Constructed decks all contained a Companion.

Companion essentially allows players to start with eight cards in their opening hand. The Companion technically is in the sideboard but can be cast at any time and doesn’t count toward the minimum deck size requirements. Each Companion has deckbuilding restrictions and normal removal will work on it. The text on all 10 IKO Companions reads: “If this card is your chosen companion, you may cast it once from outside the game.”

Despite the restrictions placed on Companions, Magic players are already speculating on which of the 10 found in IKO will get banned next. But before that happens, we’ve ranked every MTG Companion in descending order with an emphasis on the Standard format.

Already banned in the Brawl and Commander formats, Lutri, the Spellchaser can’t compete against the meta outside of the Singleton format. Since it’s been banned in those, Lutri simply becomes a fun Companion to play in casual kitchen table games.

Obosh, the Preypiercer may rank higher in the future but is hindered for now by its Companion restrictions. Like Embercleave, Obosh is a finisher who thrives within one-drop builds. Red Aggro decks already have a finisher in Standard and one-drops in Black are on the weak side.

In a deck crafted around Enchantments, Umori, the Collector has the potential to be strong thanks to Theros: Beyond Death. There’s potential within Throne of Eldraine, too, using Adventure cards. The legendary Ooze, however, is weaker when crafting creature-based builds since planeswalkers can’t be included. The same can also be said for Artifact decks without Emry, Lurker of the Lock.

Jegantha, the Wellspring seems weak upon first glance due to its restriction. But players who aren’t afraid to go five-color with Niv-Mizzet Reborn see potential. The Dragon doesn’t see too much play in Standard these days but is popular in the Pioneer format.

Charming Prince shenanigans immediately come to mind when building around Gyruda, Doom of Depths. While its restrictions will create a slow start, there’s potential within reanimation decks. A bug on MTGO has the Kraken temporarily suspended from digital play. But once the issue is resolved, it should become available again.

Kaheera, the Orphanguard may only end up creating meme builds or the legendary beast could propel Cat decks into tier-one status. It’s still too early to say. But the potential is there—and not just in Standard.

Cycling has returned to the Standard format with IKO and Zirda, the Dawnwaker is ready to exploit it. Combo decks may benefit the most from Zirda the most while planeswalker builds seem strong as well. And thanks to an abundance of Cycling cards, tempo won’t be an issue.

A Jeskai Fires build, played by Gabriel Nicholas, used Keruga, the Macrosage and finished in second place this past weekend at the Lotus Box MTG Arena tournament. Anthony Song also came in ninth place playing Keruga in a Jeskai Fires deck. Taking advantage of ELD Adventure cards and planeswalkers like Teferi, Time Raverler, players can draw what they need thanks to Keruga.

Yorion, Sky Nomad requires players to increase their deck size by a minimum of 20 cards, which for most Magic players is a “no” in Standard outside of meme decks. But Yorion may be worth using due to the number of enter-the-battlefield cards in Standard at the moment. Its ability can reset planeswalkers and Enchantments while exploiting those ETB effects, all while flying in for four damage.

Following week one of the MTG Arena Showdown, Yorion may take over the No. 1 spot after Corey Baumeister went on a five-game win streak with his Four-Color Yorion Fires.

Lurrus of the Dream Den

Lurrus of the Dream Den was already projected to perform well due to its reanimation ability. The IKO Companion proved its worth this past weekend at the Lotus Box MTG Arena tournament, in which it was included within five of the top-10 decks.

Robert Stanley won the event with an Orzhov Aristocrats build containing Lurrus. Four other players finished in the top-10 via Rakdos Sacrifice. The latter seems stronger, especially with Kroxa, Titan of Hungers Death. But don’t count out Priest of Forgotten Gods.