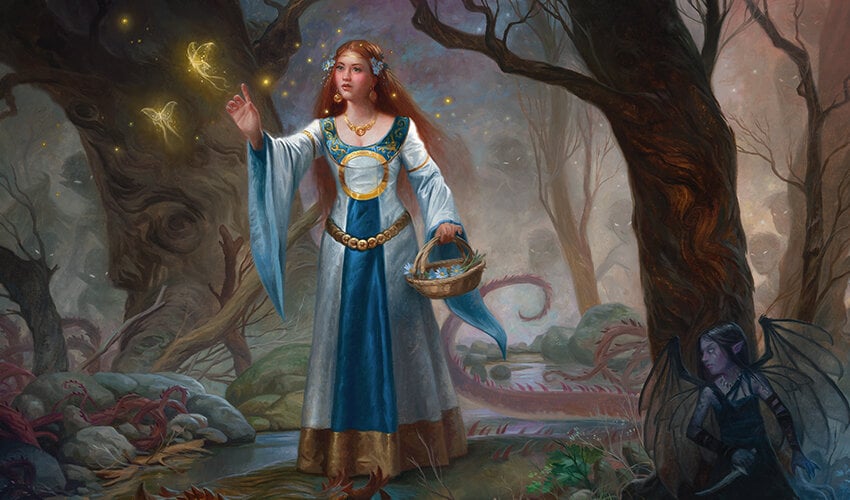 A first look at the Throne of Eldraine set in action on MTG Arena via the early access streaming event revealed several archetypes and cards that stood out from the crowd.

The Throne of Eldraine (ELD) set will have a major impact on the Standard metagame after it’s released on Sept. 26 via MTG Arena. Dozens of Magic: The Gathering streamers participated in the recent MTGA early access event, including pros with years of deck-building experience. And the results were impressive, from Aggro to Control.

Here are some of the biggest takeaways from the MTG Arena early access streaming event.

The MTGA early access streaming event gave players a chance to test out the hypothetical bombs within a set. Some of those metagame changers stood true to the hype surrounding them, but others fell a tad short.

In Mono-Red aggro, Torbran, Thane of Fell is expected to elevate the current Cavalcade deck. And he did with his glorious beard leading the way. But Torbran wasn’t the only Red card dominating the field.

Bonecrusher Giant was expected to be good, but not too overpowering. The MTGA streaming event proved this speculation to be false. Bonecrusher Giant carries the Mono-Red aggro deck with the additions of Fervent Champion and Robber of the Rich. And outside of Mono-Red, there’s Fires of Invention creating havoc in a variety of archetypes.

Murderous Rider is definitely a staple in Mono-Black and will become the new Ravenous Chupacabra in Standard thanks to its Adventure spell, Swift End. Rankle, Master of Pranks in combination with Ayara, First of Lochthwain also showed promise in Black.

Green was all about maximizing Questing Beast. But the top performer award of the day went to Lovestruck Beast instead. Another dominating ELD card that kept popping up in decks was Gilded Goose. Often paired with Oko, Thief of Crowns, the synergy between these cards was spot on. Oko, for now, is being called the next broken card in Standard.

Sometimes hype goes too far and the big reveal doesn’t live up to expectations. This was the case with Once Upon a Time yesterday. While there’s nothing wrong with the card, it didn’t cause havoc the way many thought it would.

The same can be said for The Royal Scions, one of three planeswalkers in the ELD set. The overall advantage of cantrip didn’t carry the twins and casting them actually slowed down the tempo in most decks.

Top performing decks of the day

Aggro typically always outperforms Midrange and Control in the first few weeks of a set release. And despite the MTGA streamer event being unreliable for solid win/loss stats, several archetypes stood out throughout the day.

Caleb Durward had fun ramping up in Bant Ramp while exposing a few things everyone missed (like the Golden Egg being Food).

Emma Handy put Orzhov Knights to the test and ran the field with Mono-Red Aggro, playing Torbran, Thane of Fell.

Developing top-tier decks in the Standard metagame is fun, but playing jank is a blast. Ali Eldrazi comes up with some wild builds and yesterday’s Happy Ending Bant was a prime example of his skills.

The MTG streamers and pros participating in yesterday’s early access streaming event for ELD are the reason why viewership was up on Twitch. Despite WotC slacking in the promotional department and not even hosting streamers on its Twitch channel, the streamers were on their A-game.

Setting up decks the day before and hyping up viewers up led to many getting an average peak of over a 1,000 viewers. The participating streamers were also extremely active on Twitter, posting decks and hilarious moments. But the MTG Arena Twitter feed failed to capture many of these.

WotC wants to grow but continually falls short in promoting events and attracting an audience outside of its core base. Considering the success of the MTGA early access streaming event, the only viable solution is to outsource the marketing to Magic streamers from now on.