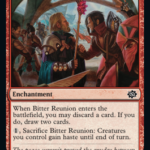 Red plays the role of a utility color in The Brothers’ War Draft and Sealed, with plenty of solid glue cards that will tie the various archetypes together.

Traditionally, Red is an aggressive color that prioritizes high-power Creatures, damage-based effects, and combat tricks. When paired with other color,s Red can also play out of the graveyard and support a go-tall Creature deck.

All of these elements are present in the color for BRO Limited. There are four primary archetypes that are supported in both Draft and Sealed that use Red to great effect.

Common and Uncommon cards are the main cards that will make up your deck in Limited. It’s important to understand what cards to prioritize while building your deck in either Draft or Sealed. Understanding a format is a multilayered approach in modern Magic because of Magic Arena. Thousands of games of Limited happen in a day, and there’s data to show what cards are performing well or not. One major tool for Limited data is 17Lands, a website that tracks play data from users who opt into using the program. While 17Lands doesn’t track every game, it does provide a snapshot of what cards perform well among Limited enthusiasts.

The top two cards on 17Lands based on drawn in-game winrate are Excavation Explosion at Common and Obliterating Bolt at Uncommon. Both are powerful removal spells that are must-grab picks in Draft. Removal plays a major role in BRO Limited, so it’s no surprise the two key pieces of Red removal are at the top. 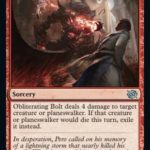 But a deck can’t be made up of only removal. There are several other cards that will help take a deck from decent to earning the coveted seven wins on Magic Arena. Here are the best lower-rarity Red cards for BRO Limited.

There’s a low cost required to play a card like Bitter Reunion which can yield some stellar results. It’s a nice source of card draw allowing you to discard a card to draw two. In Limited, that’s a powerful ability with a 40-card deck. The key to this card being playable is the one mana-activated ability that gives your Creatures haste. In a format that has plenty of big-power Artifacts backed by token synergies, giving your Creatures haste enables surprise alpha attacks that can apply major pressure to the opponent.

Scrapwork Mutt is a decent two-drop that can provide value throughout the game. This 2/1 Artifact creature rummages when it enters the battlefield. This is powerful in the R/B deck that wants to fill the graveyard with Artifacts. It both allows you to stock your graveyard and draw deeper into your deck, funding both enablers and payoffs. The body is strong enough to gleefully trade in combat and Unearth allows it to come back later in the game and provide card draw and apply pressure. At Common, this is a worthwhile pickup for most Red decks looking to get an edge in Limited.

While on the topic of the spells deck, the best Uncommon option is Monastery Swiftspear. It’s considered one of the best one-drop cards in the history of Magic and will surely make an impact on BRO Limited. If it can hit the battlefield early, it’ll be an immediate threat. With Instant speed cards, Prowess makes combat tricks and burn spells even more deadly by surprising the opponent with a sudden boost in stats. It won’t be great on turn 12, but if it can stick on turn one the game may not ever reach that length.

The second top-performing Uncommon card on 17Lands is Mishra’s Research Desk and playing it feels as good as the data suggests. This one mana Artifact is a powerful source of card draw for Red decks, looking at the top two cards and letting you pick one and play it until the end of turn. Red decks are likely to be casting plenty of spells, which may lead to a lack of in-hand resources as the game goes on. This Artifact helps ease that issue. The cheap two-mana Unearth ability lets it be a reusable card draw spell in critical late-game situations.

One of the key archetypes revolves around sacrificing Artifacts and using the Unearth mechanic to bring them back to the battlefield. Mishra helps fill the graveyard with Artifacts and also helps cast spells by generating two Red mana. It’s fragile with a 2/1 body, but there’s no need to involve Mishra in combat. If this card is allowed to stick around on the battlefield for multiple turns it’ll be a solid value engine. The ability to dig through your deck and help pay for spells makes Mishra one of the stronger value cards in the set.

This is another card that’s worth picking up in the sacrifice-based Red strategies in BRO Limited. Penregon Strongbull is a stout three-mana 2/3 Minotaur that is a sacrifice outlet. For one mana, it can sacrifice an Artifact, get +1/+1 until the end of turn, and ping an opponent for one damage. This card provides plenty of value for minimal cost. It can also become a threatening attacker if you are able to sacrifice multiple Artifacts, which could be possible either using Powerstone tokens or sacrificing an Artifact with Unearth. The ping ability will add up over the course of the game and in a format without much life gain, it’ll matter even more.

Paying five mana to deal five damage has become a staple in modern Magic Limited design. In most sets, this style of card is playable and generally is one of the key removal spells in Red. Unleash Shell is a twist on that formula with a stellar upside of dealing two damage directly to the opponent. This turns Unleash Shell into both a removal and burn spell all wrapped into one neat, five-mana package.