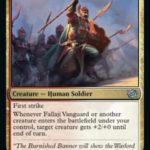 War is brewing on the Magic: The Gathering plane of Dominaria in The Brothers’ War, featuring a total of 10 two-color Limited Draft archetypes.

The set contains a new mechanic called Powerstones, a form of ramp for Artifacts only. There are creatures or abilities scattered throughout the set that add mana of any color, but it’s unlikely they’ll play a major role in Draft.

And there are no Common dual lands within The Brothers’ War set.

A return to two-color Limited archetypes brings about new themes established within The Brothers’ War. Azorius, or Blue and White, has a soldier tribal theme. Dimir, Blue and Black, has a draw two or more card theme designed into it. Other color pairs like Blue and Red still have a spells matter theme, with the addition of Artifact synergies. And White/Black, or Orzhov, has a recursion theme.

All of the two-color archetypes within BRO Limited Draft and Sealed have Artifact synergy, whether from the Unearth or Prototype mechanic. There’s also a minor sub-archetype designed into the MTG set around Artifact assembly-worker creature types.

Similar to Melding, it’s hard to pull off the full cycle of Autonomous Assembler, Mine Worker, Power Plant Worker, and Tower Worker. But players don’t have to, as some can operate individually while others combo off one another.

All BRO Draft archetypes and their signpost MTG cards

Each MTG archetype within Limited Draft has what’s called a signpost card. It’s a dual-colored card with an Uncommon rarity that supports themes within each archetype. There are also 10 dual-colored legendary creatures with a rarity of Rare in BRO, leaning heavier into each archetype’s theme or design.

The two signpost cards for RW are Fallaji Vanguard at Uncommon and Queen Kayla bin-Kroog at Rare. It’s an aggressive creature-heavy build.

UR Spells and Artifacts matter

Spells still matter in the UR archetype, along with Artifacts due to the creation of Powerstones. Third Path Iconoclast in the Uncommon signpost.

The WB archetype provides access to removal in both colors, along with strong low-cost mana creatures that can return to the battlefield. Hero of the Dunes is the Uncommon signpost.

Hero of the Dunes

The Red and Green archetype has several Artifacts with the Prototype mechanic that can beat down opponents through Trample and powerful stats. Arbalest Engineers is the Uncommon signpost.

Blue and Black have a new look in BRO Limited Draft. The archetype still has a control feel while encouraging multiple cards drawn per turn. Evangel of Synthesis is the Uncommon signpost.

The Black and Green archetype encourages cards in the graveyard, with the means to reanimate them. Skyfisher Spider is the Uncommon signpost.

Black and Red still want to sacrifice things, with a focus on sacrificing Artifacts like Powerstones. Junkyard Genius is the Uncommon signpost.

The White and Blue archetype has a strong soldier tribal theme, that prefers to go wide. Harbin, Vanguard Aviator is the Rare signpost. Yotian Tactician is the Uncommon signpost.

The Green and Blue archetype will ramp into big Artifacts, instead of creatures within the BRO Limited format. Battery Bearer is the Uncommon signpost.

Several BRO signpost cards hadn’t been revealed at the time of writing. Updates will take place following the end of spoilers on Nov. 4.

Update Nov. 6 10:30pm CT: All archetypes were updated following the official release of all BRO cards by WotC.