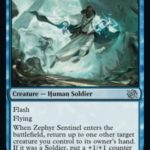 Blue is one of the stronger Magic: The Gathering colors in The Brothers’ War (BRO) Limited Draft format, featuring six cards that can slot into a variety of archetypes.

Artifacts are the main theme of the BRO set, showcasing synergistic low-rarity Blue MTG cards in the Limited format. The main Limited archetypes for Blue in BRO Draft are soldier tribal with White, card draw with Black, ramp with Green, and spells matter with Red.

Six of the 25 MTG cards in Blue with a rarity of Uncommon and Common rank as the best BRO Draft cards to grab as early picks, and several are worth an honorable mention.

Koilos Roc is a five-drop bird with Flash and Flying. It also has 3/3 stats and creates a Powerstone token upon entering the battlefield. Koilos Roc is a solid mid to top-end Common that does everything a draft player wants from the color Blue. 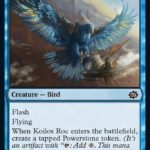 Weakstone’s Subjugation is a decent Common that is good against an opponent’s top-end finisher. Mightstone’s Animation can turn a Powerstone into a 4/4 creature while drawing a card and Stern Lesson is a Common that draws cards while also ramping with the creation of a Powerstone.

Here are the six best Blue Common and Uncommon rarity Blue MTG cards in the BRO Draft format, including Artifact creatures with a Blue Prototype cost.

Capable of copying an Artifact or creature upon entering the battlefield, Hulking Metamorph will more often get cast at its Prototype cost of 2UU. Targets for the copy should include text that swings a board state advantage since the stats aren’t the focus.

Thopter Mechanic is an ideal two-drop in a variety of Blue BRO Draft archetypes. The human artificer was designed for the UB archetype, scaling in power by +1/+1 upon a second card getting drawn per turn. A 2/1 Flying creature for two-mana is a good rate, and as an added bonus, Thopter Mechanic creates a 1/1 Thopter Artifact token with Flying upon dying.

Players can gain spell and card advantage with Fallaji Archeologist. The human scout mills three cards while you can seek to add a nonland/noncreature spell to your hand from the three cards that were self-milled. Creatures that get tossed to the graveyard can return through Recursion in White and reanimation in Black. Fallaji Archaeologist is best in a UR archetype Draft deck.

Zephyr Sentinel is a well-designed Uncommon two-drop in Blue. The human soldier has Flash and Flying on a 2/1 body. Zephyr Sentinel also synergizes with the WU soldier archetype, scaling in power by +1/+1 should you choose to return a soldier to hand. Zephyr Sentinel opens lines for cool combos and can protect key cards under the threat of removal.

Similar to Thopter Mechanic, Urza, Powerstone Prodigy was designed to slot into the UB BRO Draft archetype, and he’s an Uncommon bomb for it. The artificer has Vigilance, although it doesn’t matter much since players will want to use his activated ability the most.

Wing Commando is an Uncommon Bomb in the UR spells matter archetype, featuring the returning Prowess mechanic. The three-drop can also slot into other BRO Draft archetypes, having a soldier creature type and 2/2 stats with Flying for only 2U.

Players can drop Wing Commando on curve or gain value out of the flyer during late-game stages through Prowess. The mechanic scales the soldier’s power by +1/+1 each time you cast a noncreature spell that turn.