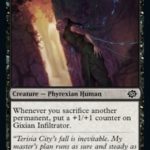 Graveyards matter in the Artifact-heavy BRO set, featuring recursion and reanimation through the MTG color Black in the Draft format. Two-color archetypes are the focus in Limited Draft, featuring a total of four archetypes with the color Black—three that focus on graveyards and one that enables drawing two or more cards per turn.

Graveyard themes can slot into just about any MTG archetype since there are always permanents that end up in the graveyard. The BRO set counters the graveyard action through exile removal spells and activated abilities, but not enough to shut the graveyard matters archetypes down completely.

There are several Black BRO Draft cards that want to pull you into an archetype or into the color itself, and a few honorable mentions. Gnawing Vermin is a one-drop Uncommon that supports self-mill and triggers -1/-1 damage to all enemy creatures upon dying. The rat can deal with go-wide tokens and contribute toward graveyard shenanigans. 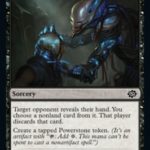 The color Black has the standard return-to-hand from the graveyard card through Emergency Wild, a Common that also produces a 1/1 Artifact soldier creature token. Disciple of Gix in the right build can have powerful implications during the late-game stages. Gix’s Caress is a strong removal at a rarity of Common and Disfigure is a great one-drop Instant removal spell.

From Artifacts with Unearth to Phyrexian horrors and removal spells, here are the seven best MTG Black Common and Uncommon cards within the BRO Limited Draft format.

Battlefield Butcher is an Uncommon that can chump block during the early game and drain an opponent during the later stages with a reduced activated mana sink that relies on creatures in the graveyard. The human soldier isn’t strong enough to pull a player into Black prior to the BRO set’s release but has the potential to end games and provide value in Draft decks that lean into creating Powerstone tokens.

With Unearth in the BRO Draft meta, Ashnod’s Harvester is a solid choice that can get splashed into any archetype. It’s a top pick because of its versatility. The Artifact creature is a two-drop with 3/1 stats that exiles a card from a graveyard upon attacking. And it has Unearth at the low cost of only 1B. Ashnod’s Harvester is also a solid sacrifice target in Black and Red BRO Draft decks.

Removal spells matter in the color Black, and Overwhelming Remorse is the best Instant Black removal spell in the BRO Draft meta. The Common rarity spell has its cost reduced for each creature in your graveyard. Even without self-mill synergies, most graveyards will have at least two creatures in them by the time you want to cast Overwhelming Remorse on your opponent’s best creature or planeswalker.

Removing an opponent’s big threat for around three mana is a solid deal. As an added bonus, Overwhelming Remorse exiles the creature or planeswalker, preventing opponents from reanimating it back from the graveyard.

Scrapwork Rager is a colorless Artifact with a Black Unearth cost. The Phyrexian horror draws cards upon ETB and can return to the battlefield without another spell through Unearth. Scrapwork Rager is a solid Artifact creature to discard, along with being a sacrifice target.

The only downside to Scrapwork Rager is that it costs one life each time Scrapwork Rager enters the battlefield. Lifelink in the BRO set is limited, found mostly in the colors Black, Green, and White.

No One Left Behind

Returning creatures directly to the battlefield from your graveyard is very strong in the Limited format. In conjunction with Unearth, No One Left Behind has even more value in BRO Draft. Cards with an ETB effect like Horned Stoneseeker are a solid target in BR, while Carrion Locust can work in any archetype using Black.

Giant Cindermaw is also a solid reanimation target at three or fewer mana that prevents life gain while having Trample. No One Left Behind can even bring back signpost cards like Junkyard Genius or Evangel of Synthesis. The downside to the Sorcery spell is that it’s a dead card in opening hands, but it does get better as the match progresses.

Gurgling Anointer is a bomb in the UB archetype at Uncommon rarity. Drawing a second card isn’t easy to pull off in BRO Draft. One trigger on Gurgling Anointer makes the card worth building around, though.

The Phyrexian horror is packed with value, from scaling in power from second card draws during a turn to having Flying as a keyword and reanimation from your graveyard to the battlefield. Gurgling Anointer can also get played in the WB archetype as well.

Gixian Infiltrator is a two-drop Common that scales quickly in sacrifice archetypes like BR and WB. Even lands like Evolving Wilds can trigger scaling of +1/+1 counters on the Phyrexian human, along with any Powerstones that are sacrificed. Any sacrifice-themed decks should prioritize the two-drop since it can wear an opponent’s health down quickly when played on curve.