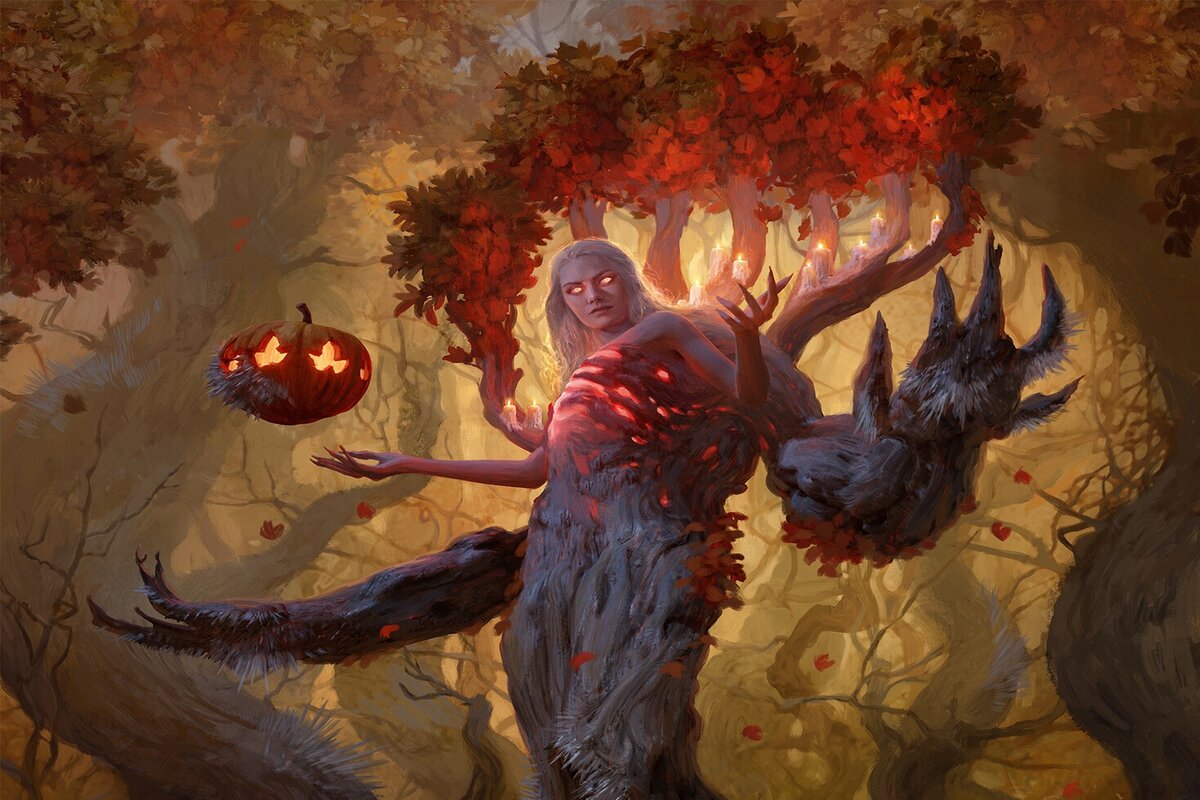 Fall rotation has left the Magic: The Gathering Standard format wide open for new decks that could earn players up to 30 free booster packs in the MTG Arena Standard Metagame Challenge.

The Standard 2021-2022 season in MTG Arena has officially begun with the digital and global launch of Innistrad: Midnight Hunt. With ELD removed from the format, players are taking advantage of cards unplayable before, while adding new additions from MID. The MTG Arena Standard Metagame Challenge is a chance for players to test out many of the new and revised Magic decks while earning gold and booster packs as a reward.

From stompy Green and Simic ramp to Black Control, here are the best MTG decks in the Standard format following the release of MID on Sept. 16.

Wrenn and Seven are in the house with a wolf pack leader, a troll, and a chariot vehicle ready to plow a path towards victory. The shell of Mono-Green contains Werewolf Pack Leader for its card draw ability via Pack Tactics, Esika’s Chariot as the best Green card in Standard, the new MID planeswalker Wrenn and Seven, Blizzard Brawl for removal, Faceless Haven to combat board wipes, and Old Growth Troll as one of the best Mono-Green three drops in Standard.

The addition of MID opened the door for a variety of Mono-Green stompy builds, utilizing older Standard cards that were in hiding during the reign of ELD. Master Symmetrist (STX) is a four-drop with Reach that gives all creatures with power equal to toughness Trample until the end of turn when they attack—synergizing with a number of MTG Green creatures. In Search of Greatness (KHM) is an enchantment that will either let you cast creatures for free or let you Scry one at the beginning of your upkeep, slotting nicely into Mono-Green and Simic Ramp builds.

Other solid additions to Mono-Green from older Standard sets include the Ranger Class Enchantment from AFR, Inscription of Abundance from ZNR, and Toski, Bearer of Secrets from KHM. New additions from MID that pop off strong are Primal Adversary and Unnatural Growth.

Black is by far the strongest MTG Limited color within the new MID set, providing players with bombs like The Meathook Massacre and cheap removal via Infernal Grasp. Professional Magic player Grzegorz “Ulich” Kowalski used these new cards from Midnight Hunt to create a Mono-Black deck that not only dominated during playtesting on the MTG Arena ladder but shut down Mono-Green builds utilizing Esika’s Chariot.

Tips for piloting the deck from Ulich include using planeswalkers early, taking time to do the math to see if The Meathook Massacre can hit your opponent for lethal, utilizing Skullport Merchant to draw cards via token treasures and creatures, and maximizing the full potential of Lesson and Learn cards within the deck.

The popular Standard 2022 MTG Arena deck has survived fall rotation, keeping much of the same shell.  Righteous Valkyrie is the main angel and cleric life-gaining engine, in conjunction with Legion Angel. New cards include Liesa, Forgotten Angel, and Infernal Grasp. Rampage of the Valkyries keeps creature heavy opponent builds at bay while Starnheim Unleased is still a viable finisher.

WB Orzhov Angels is typically a better performing MTG deck in bo1 but additions like Fracture (STX) in the sideboard can deal with new threats within the Standard meta. Homestead Courage is also a good sideboard option as a cheap combat trick with Flashback that can ideally get played within the same turn. And players can choose to include The Book of Exalted Deeds or MID White removal like Fateful Absence.

Simic Ramp has returned to the Standard format. Created by the popular Magic streamer Stephen “Crokeyz” Croke, his Simic Ramp build includes several new MID cards. Rootcoil Creeper is a value-packed mana dork that can also return exiled Flashback cards to hand. Grafted Identity can permanently steal an opponent’s creature while the land Hall of Storm Giants can become a 7/7 creature with Ward.

Alrund’s Epiphany is still an annoying KHM card opponents don’t want to see due to its value, as is the inclusion of Esika’s Chariot within a GU build. The true bombs of the GU deck come from the MID set: Wrenn and Seven, and Storm the Festival.

Mono-Red Goblins are gone but burn in MTG Arena is very much alive thanks to the release of MID. The Aggro deal damage to your opponent’s face is a great bo1 deck that also has potential within the bo3 Standard format.

Top MID cards to play in Mono-Red Aggro burn include Thermo-Alchemist, Light up the Night, Play with Fire, Reckless Stormseeker, Moonveil Regent, Smoldering Egg, and Burn Down the House.

Unlike tabletop Magic, Shock is a Standard-legal card within MTG Arena thanks to the digital platforms Arena cards. The deck can also include other removal and burn cards like Meteor Swarm, Igneous Inspiration, Frost Bite, and Cinderclasm.

Players can also choose to make their Mono-Red Aggro deck with a focus on creatures and burn to finish of an opponent. The Goblin Fireblade Charger is still one of the best Mono-Red one-drops, followed by Dragonkin Berserker in the two-drop spot. The early game damage truly ramps up on turn three with Reckless Stormseeker while either Moonveil Regent or Goldspan Dragon are solid top-end cards. Fill the rest in with burn and removal and try to deal as much damage early on to hit your opponent with burn damage to the face in order to finish them off.

Mono-White has become the second-best MTG Aggro deck post-rotation, with Mono-Green Stompy ranking as the best. The shell has changed slightly thanks to the addition of Adeline, Resplendent Cathar, and Intrepid Adversary from MID. In addition to the humans, combat tricks got an upgrade via cards like Ritual of Hope and Homestead Courage.

The rest of the Mono-White Aggro build has remained much the same, utilizing second spell casting. Elite Spellbinder is a great three-drop, along with Luminarch Aspirant as a two-drop. Recent additions to the build are including Brutal Cathar within the main deck alongside Elite Spellbinder, bumping Skyclave Apparition to the sideboard. Sideboard cards include new additions like Fateful Absence while still using the Artifact Portable Hole.