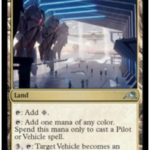 A large number of Rare and Mythic Rare cards from Kamigawa: Neon Dynasty were spoiled on Feb. 2, capturing the flavor of the set while also being playable in multiple Magic: The Gathering formats.

Completing the legendary dragon cycle within Kamigawa: Neon Dynasty (NEO) was Kura, the Boundless Sky, a Green dragon that synergizes with Landfall and planeswalkers like Wrenn and Seven. A Mardu samurai also dropped, called Isshin, Two Heavens as One, who doubles as an ability that triggers on a permanent when it attacks. And Thundering Raiju, a spirit with Haste in the MTG color Red that buffs creatures you control with a +1/+1 counter when it attacks while also dealing direct damage—determined by the number of Modified creatures you control to your opponent’s life total.

Here are the best NEO spoilers from Feb. 2.

Blade of the Oni