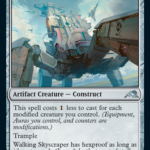 Colorless cards are the filler pieces of Limited in Magic: The Gathering, but that doesn’t mean they don’t have their niche applications.

Many colorless cards support the set’s different archetypes with catch-all abilities that are overcosted to keep them as fringe playables and not format staples. Neon Dynasty has more use for colorless Artifacts than other sets because of its Artifact theme.

Here are the best colorless Common and Uncommon cards in Neon Dynasty Limited.

Circuit Mender will find a home in sacrifice strategies that will gladly send this card to the graveyard.

Ecologist’s Terrarium is a two-mana Artifact that ensures that you’ll hit the next land drop. It then becomes an effective way to enable modified strategies by giving a Creature a +1/+1 counter, which can come in handy if you haven’t drawn any other ways to modify a Creature.

Network Terminal is the standard three-mana rock that’s found in every Limited set. This card adds extra value as a consistent source of card draw. This can make use of attached equipment or tokens on the battlefield to tap them and help you dig deeper into your deck. Network Terminal might make the cut more often than not in Artifact-heavy builds.

Walking Skyscraper isn’t the best payoff for modified strategies, but it certainly is an imposing one. At a massive 8/8 power and toughness, Walking Skyscraper is sure to be the biggest card on the battlefield. Trample makes it impossible to chump block and will force an opponent to deal with it or take massive damage.

Eight mana is a lot, however, the cost can be reduced for each modified Creature you control. At uncommon, this will be easier to get your hands on than some of the more powerful Rare and Mythic Rare payoffs.