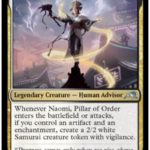 A total of 10 Magic: The Gathering Draft archetypes are contained within Kamigawa: Neon Dynasty, supported by an Uncommon creature with the colors for that archetype.

Each Kamigawa: Neon Dynasty (NEO) Draft archetype is represented by two Magic colors, supported by signpost creatures that synergize with each archetype’s overall theme. Many of the themes cross over between MTG colors, while others are solely seen in a specific color.

The upcoming Standard-legal set includes plenty of samurai and warriors, along with Dual-Faced sagas, powerful vehicles, and cards that encourage players to tap into the Modification mechanic. The NEO set has a heavy focus on both Artifacts and Enchantments, showcasing a mashup of modernity and tradition with Artifacts representing modern inventions and technology and Enchantments representing tradition.

The NEO set also includes a number of cycles, cards that have the potential to pull a player into a specific archetype within Limited Draft if appearing as a pack-one pick. There are five legendary dragon spirits with a rarity of Mythic Rare, and there’s a cycle of Common and Uncommon sagas that could impact have a significant impact on the NEO Limited meta.