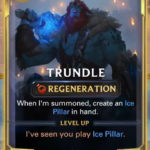 Legends of Runeterra: Call of the Mountain’s card reveal season shows no signs of slowing down. Riot Games revealed today the champion reigning from the Freljord region that helps bolster the Behold mechanic.

Trundle is a five-mana champion with 4/6 stats and the Regeneration keyword and an effect that adds an Ice Pillar to your hand. He levels up when he sees you summon an Ice Pillar. The pillar itself is an eight-mana unit with 0/8 in stats and it has an effect that occurs when its played and during Round Start that grants the strongest enemy Frostbite and Vulnerable. While this Sejuani-like effect every turn sounds powerful, the pillar itself has Vulnerable, so enemies can interact with it to have an easier chance in destroying it. The Ice Pillar also refills eight of your mana after you play it so you don’t lose too much tempo when playing it to level up Trundle.

Trundle’s leveled form is also five-cost with +1/+1 in stats and the same keyword and effect while also gaining Overwhelm. He also has a new effect that happens on attack that grants him +1/+0 whenever he attacks for each eight-cost or higher card that you’re Beholding.

While Trundle himself is not an eight-cost card that can help your other cards with Behold, he adds an eight-mana card to your hand. This allows you to have a guaranteed Behold trigger once you play him for five mana.

Trundle’s stats and Regeneration ability makes him a hard unit to remove through combat, and this allows him to help control the board until you make it to turn eight where you can play the pillar he grants you. After you have both your leveled-up Trundle and Ice Pillar, it will be hard for any combat-focused deck to contest the board. This is because their strongest unit will always have their power sapped by the pillar and Trundle will perpetually get stronger every time he declares an attack.

Trundle’s champion spell, Icequake, is another card to help activate other Behold cards, as it is another mass removal spell that can destroy weak units and reduce the strength of units that survive the three damage AoE.

Trundle will join the champion roster when LoR: Call of the Mountain is officially released for PC and mobile on Aug. 26.