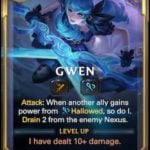 Gwen and her Legends of Runeterra support package within the Forces from Beyond expansion provide sacrificial fodder with an upside to the Shadow Isles region.

The Shadow Isles region within Legends of Runeterra is all about sacrificing allies to trigger an ability or effect. There were already over a dozen units and spells within the Shadow Isles region that benefited from sacrificing an ally before Gwen was revealed. Gwen brings the new keyword Hallowed, providing +1/+0 stats to the first attacking unit that round after a unit with Hallowed dies. The Hallowed stats applied stack with each unit that dies.

In addition to the first unit attacking (left to right on board), Gwen also gets any Hallowed stats while draining the enemies Nexus upon attacking. But Hallowed isn’t exclusive to Gwen. Kalista, Kindred, Thresh, Virgo, and especially Hecarim all thrive on sacrificing allies and/or Ephemeral units. In today’s LoR spoilers, a total of seven cards were revealed that either have the keyword Hallowed or support the archetype. 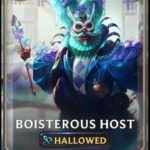 Boisterous Host is the standard one-drop that can slap an opponent on turn one for two damage and then chump block on turn two, starting the Hallowed stacks. Phantom Butler is a two-drop 3/1 that’s a solid chump blocker and an attacker with Fearsome and Hallowed. And Ghostly Paramour is a vanilla 3/3 four-drop with Lifesteal and Hallowed. 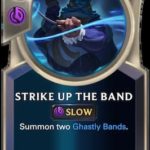 Gwen’s signature spell, Thread the Needle, which can get played without her, also has interesting implications. It’s a three-cost Fast spell that kills an ally and then deals the power level of that ally to an enemy. The spell is powerful on your attack turn, especially in conjunction with Hallowed but can fall flat on your opponent’s attack turn when you don’t have any buffed sacrificial fodder.

Potentially better than Thread the Needle is Formal Invitation, a three-drop Burst speed spell that creates copies in the hand of two allied followers that have died in this game. It can’t revive a champion but, if timed and played correctly, could revive key Hallowed units to speed up the stacks.

Players can test out the Legends of Runeterra Hallowed package and Gwen with the Forces from Beyond expansion release on July 20.