Legends of Runeterra’s latest update, Patch 2.13.0, ramped up the content to the Lab of Legends mode with a new roguelike experience in the form of The Saltwater Scourge.

While the original Lab of Legends had only nine encounters to look out for, making the experience similar and linear, The Saltwater Scourge brings over 30 different encounters. While you can always assume the map will have Bilgewater enemies, a second region of enemies can pop up between Ionia, Noxus, and Shurima depending on the mid boss that shows itself at the start of a run. 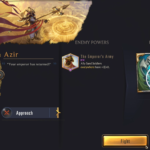 Depending on their level, each enemy that appears can either have no passive power or one of three rarities depending on what level you encounter them. Here’s every enemy, what powers to expect, and how to best beat the trickiest ones.

At lower difficulties, constantly clearing the board will trivialize this fight. Even if Brash Gambler nabs from you, this version of the card-stealing ability will reveal the card you lost.

Since Bubble Bears are guaranteed to appear, having ways to challenge or remove six health will be vital to finding victory. At higher difficulties, it’s best to get Elusive chump blockers ready, since the Bubble Bears can scale up ridiculously quickly.

Crackshot Corsair is nearly guaranteed to deal damage to you, since the card itself can be played early. If you constantly clear the board, you will find easy victory.

Jagged Taskmaster isn’t too daunting if you never let her deal damage to your Nexus to trigger her Plunder ability. Removing units and going wide helps prevent this.

While the imposing threat of cheaper Sea Monsters sounds scary, as long as you can keep the board clear and win quickly, you should be able to win before the Jaull Hunters goes deep. Since Jaull Hunters is nearly guaranteed to appear, be sure to have a plan to protect your high value units with four or less health against a 4/1 Challenger.

Treasures can provide immense random value that’s difficult to play around. It’s best to try and win this encounter quickly before the Shipwreck Hoarder can outvalue you and find your treasures faster than you.

Unless you’re fighting Monkey Idol early on where the enemy starts with no mana, expect to take some stray damage due to the constant barrage of Powder Monkeys. When you face off against an Epic-variant of Monkey Idol, be sure to go wider than Monkey Idol to deal damage and end the fight quickly.

This fight isn’t too scary outside the Epic-variant, since the Wiggly Burble Fish can sometimes brick out on draws and fail to play cards. The highest difficulty version of this fight can run you over if you’re not careful, however, due to the double spellcast. Be sure to have removal options ready for a wave of 2/1 Elusive units, and watch out if they have seven mana for Mind Meld.

Since the Common and Rare-variants of this encounter swap your cards back and forth, you can plan around when to have a certain card. The Yordle Grifter’s power will not activate if he cannot provide a follower unit to you.

As the final boss, you must always build your deck with defeating him and his tools in mind. Always remove Powder Kegs on turns where you have the attack token. If Gangplank attacks on odd turns, expect to deal with his level two form and his abilities. Do not reduce his health to 20 if you cannot deal with The Dreadway. Try to set up a massive board and let his health stay at 21 or above before dealing a final blow.

Since Herald of Spring relies on the Support mechanic for victory, be sure to keep the board clear to prevent a chain of units attacking together against you.

While Fae Bladetwirler is a pushover at lower difficulties, this fight can kill speedruns if you run into the Rare or Epic-variants due to the constant stuns you’ll have to deal with on your turns. If you are trying to go for an S in the speed badge, it may be best to avoid this fight if they aren’t on the direct path to Gangplank.

At higher difficulties, Shadow Assassin’s power will affect your board too. Be sure to go wide with your board to circumvent the constant bounce effect you must deal with. Shadow Assassin can easily end your runs if you’re not careful and are unable to deal with Elusive units.

Since Dragonlings are regularly summoned in this encounter, don’t prioritize trying to burn the opponent since they can heal any damage back up. Try to run them out of resources before committing to dealing meaningful damage.

The first turn of the Karma fight is the most dangerous. Be sure to draft expensive cards in anticipation for her fight. Dealing with Karma after letting her cast her champion spell often means you will have the chance to gain the lead before another Karma can be drawn.

When Crimson Disciple reaches her Rare and Epic variant, any unit that has one health at the end of the turn will still die before receiving the one health bonus. Since Crimson Disciple is guaranteed to show up, be sure to expect stray burn damage if you cannot deal three damage to her.

Due to the free stat bonus, it will be tough to stall in this fight at higher difficulties. If you’re trying to squeak healing out of your deck, it might be best to prioritize ending the fight instead, especially at lower life totals.

Similar to most Bilgewater fights, removing any unit as they’re developed significantly reduces the difficulty of this encounter.

The Epic-variant of Legion Marauder is the most dangerous, especially if you lack a way to remove a two or three health unit on the first turn. Once the game continues, be sure to remove any Marauder that shows up, otherwise you will lose the board quickly.

Due to the constant wave of damage that will appear, be sure to play around either protecting your stunned units or accept losing them and building a new board.

The Epic-variant of Trifarian Gloryseeker is the most dangerous, since random keywords can routinely destroy you if you’re unlucky. There’s always a chance that Elusive or Overwhelm can show up. In addition to this, watch out for combat tricks like Whirling Death or Bloody Business, since those will trigger Militant March.

Out of all of the mini bosses, Swain is probably the easiest. Despite this, his encounter can be devastating if you lack tools to remove him once he levels up and is summoned to the board. This is because every time a unit is summoned, he will stun your strongest unit, leaving you vulnerable to attacks.

The only difficult portion of a fight with Vekauran Vagabond is the mid-game when you lose your initial mana gem. If you can survive that initial threat then you often times will win since you can keep board control fairly easily.

Desert Legion can deal stray damage to you due to the free Sand Soldiers that will spawn to their side of the board. They also play abilities which summon and buff Sand Soldiers, so be sure to have a plan ready if they summon waves of enemies that you can’t remove.

Since the AI has a chance to bolster their enemies at focus speed, remove any threats that appear whenever you get an action. An empty board will make any Lucky Find they create go to waste.

While it’s not likely the game goes late enough to use the created Sanctum Conservator’s effect, you can always check how close the AI is to 13 slay credits by hovering the card in their hand. If the opponent does reach eight mana and 13 slays, then be ready to play around the follower board wipe ability of the Conservator.

Raz is one of the deadliest Shuriman encounters if he reaches the late game. This is due to the fact that his Fearsome units are difficult to block with the constant wave of power debuffs you will face off against with any newly developed units.

While Landmark removal trivializes this fight, it is hard to draft those tools in a run. While a 7/6 Overwhelm unit is daunting, you should have an time to plan around dealing with it due to the Countdown .

Azir has similar play patterns to the Desert Legion encounter, be ready with chump blockers into Sand Soldiers if you value your health total. If the fight goes on for too long Azir will activate abilities which further buffs the power of his Sand Soldiers.

With LoR Patch 2.13.0 now live, try out Lab of Legends: The Saltwater Scourge and claim the character specific icons for yourself.