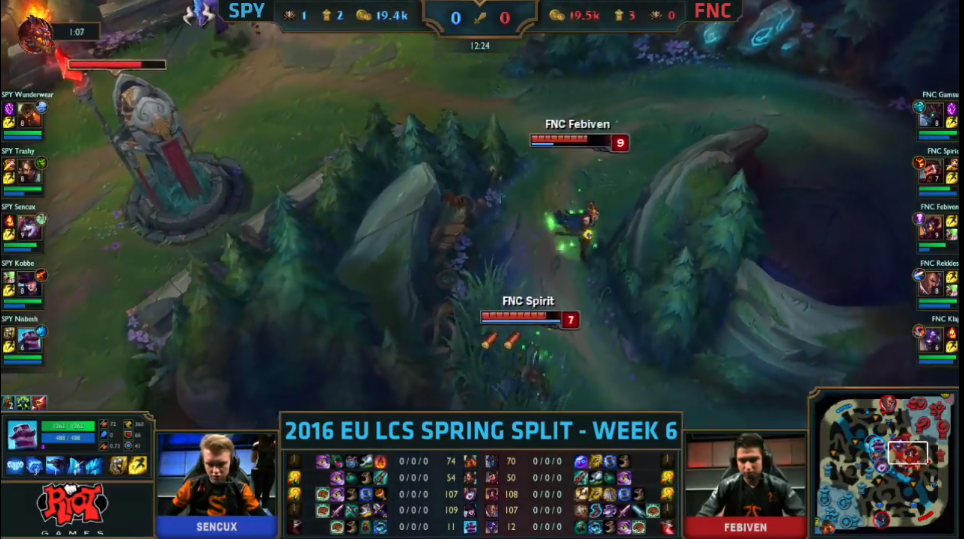 A couple hours ago, Fnatic’s league of legends team lost in an upset to Splyce.
Fnatic made quite a few mistakes, while Splyce had a somewhat clean showing.
I want to use this article to highlight a few of the bad decisions Fnatic made that lead to their demise.

The first mistake I want to talk about is the misunderstanding of the pressure game.

Let’s try to understand what SPY see in this play.
Toplane: not threatened, a TPless champion is depushing it : no threat, can be ignored.
Midlane: not threatened, it is blue timer, and the waves are shoved.
Botlane: threat to towers, but can be dealt with by sending Nidalee to kill the Maokai. Cost : allocation of the jungler, nidalee, to the play, can result in FB money and pressure on the map due to a respawning player for FNC.

What can FNC do to prevent this?
1- communicate that they have no pressure on eithe top and midlane, tell Gamsu to back off and not to overextend before they have the pressure back up.
2- Pressure mid turret? Hard to do when 3 people can match your 3 due to your allocation of Rekkless top.

Next up is the Drake play during which it gets stolen by SPY.

In this play, FNC try to go for Drake, but let’s have a quick look at how the map is set up.
Toplane: Pressure is exerted ON Fnatic’s toplaner, he went for RoA that takes a moment to scale, and Kikis went for a flat value item, a pick up and fight item, sunfire, this gives him the bully power, so he can shove Maokai in, and even force his flash. Therefore, FNC’s toplane is not available as a ressource to this play.
Midlane: Pressure is even, both midlaners clear waves and move to the play, both being available.
Botlane: Pressure is exerted ON Fnatic, their tower is assaulted by minions, and they try to play the game fast and out rotate SPY by neglecting to pick up the farm.
In the end, the 2nd Drake is stolen by SPY, and nothing is gained by FNC, but they are pressured in both TOP and BOT by minions shoved at their turrets, also, SPY will have an easy time taking down turrets with the burn damage onto structures from 2nd Drake

What can FNC do to prevent this?
1- build their toplaner so that he can withstand the assault from nautilus, thinking about BoC, this would allow Maokai to shove Nautilus back, while providing the team with AoE MR which is great vs nautilus, nidalee AND lulu, all of which have their damage gimp by flat MR since they dont get a lot of Mpen.
2- Combo Nidalee when she goes in for the steal.
3- Do not go for this play, it is arrogant to discard your lane farm for a potential gain of one drake. If you take them by surprise, finish it, if not, move away and look to capitalize on them using their spells on drake.

And now, the over aggression from FNC that seals the deal

This is Fnatic’s biggest mistake.
Let’s have a look at the situation as a whole.
Toplane: 2 levels down, SPY top has access to his rank 2 R. Gamsu is shoved against his tower, making him unavailable to play without both losing CS and using his TP. The gear advantage is in SPY‘s court.
Making a play at this moment is ill advised if the play isnt a free pick.
Jungle: 2 levels down, SPY jgle has access to his lvl 11, but it’s Nida so it’s not gamebreaking. Gear is fine.
Mid: Same level, Febi doesnt have his R up, he just used it to scare off Sencux, so FNC is lacking a big part of their damage. Febi is missing his summoners, therefore he cant posture aggressively vs Naut and friends.
ADC: Rekkless has a level advantage and access to his rank 2 R, making him a serious threat. Items are about even, summoners are up.
Supports : Gear and levels are equivalent, shouldnt be teamfightbreaking.

By having a global deficit in the top (in lvl, position, and gear), a summoner and ultimate deficit in the midlane, FNC shouldnt be looking to force a play but should be ready to capitalize on SPY mistakes. All FNC has going for them on this fight is the Lucian rank 2 R.

This fight leads to a tp disadvantage, inner mid turret to be taken down and going from a 2.2k deficit to a 4.5k.
Assessing the situation before acting has to be done.

What can FNC do to prevent this?
1- Correctly assess the situation before pulling the trigger. Low percent chance they win the fight, high risk to fall too far behind due to 2nd Drake and it’s burn damage on towers.
2- Get a better itemization on Maokai, BoC + Zz to keep Naut away and be able to move freely around the map with Maokai.
3- Not try their luck, be the better team and wait for mistakes instead of rolling the dice.

This next play is a testimony to the fact that Zz’rot is a broken item.
Have a look at the player allocation for each lane for FNC compared to SPY.
Toplane is SPY’s adc, uncontested and pushing.
Top jungle is SPY’s jungler, uncontested and rampaging on Spirit’s jungle. He cannot go there because mid/top side of the map has 4 SPY players compared to his 2 teammates and him.
Midlane are both midlaners shoving lanes, pressure is on FNC to unpush.
Botlane is where the missmatch is : SPY has 1 player + 1 zzrot and FNC has to send 2 players.
Therefore, the rotation from SPY is to go for the top inner tower, unopposed thanks to Zz’rot pressure bot.

From there, if SPY plays the game correctly with flank wards and vision control, with a good use of Zz’rot and baiting baron, FNC cannot win the game.

What could have FNC done to turn the game on it’s head?
I have identified one moment during which FNC could regain momentum, but they didnt capitalise on it.

This is the moment I am talking about, SPY got greedy, tried to go for baron, couldnt finish it but got Febi’s head for it. They then had to B, and FNC got mid turret.
This is when you have to set up flank wards to try to use your TP that is up on Maokai and not on Nautilus to force a 5v4 in your favor.
Alas, this wasnt done and therefore FNC couldnt get the upper hand in this matchup.

This is it for my analysis on this piece, if you want to discuss more strategy and how this game turned out, do reach me at https://twitter.com/Mephisto_V