We’ve already heard this story before. 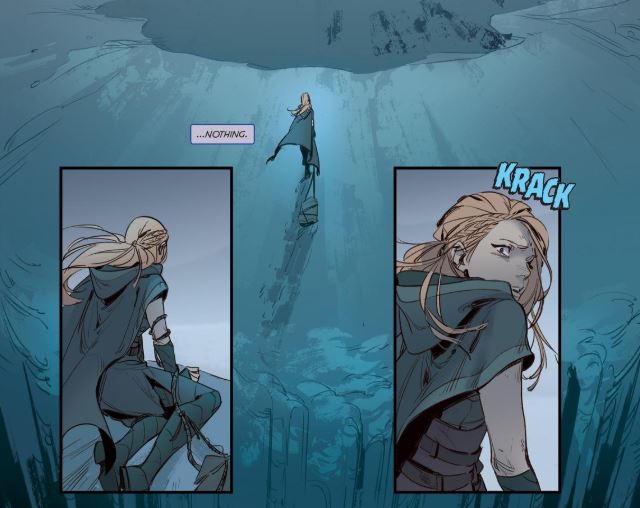 Where the first issue introduced new characters, settings, and cultures of the Freljord, this issue was essentially a more detailed retelling of her old lore. Without ruining specifics or any (sort of predictable) plot twists, you can read her old lore to get a basic understanding of what happens—Ashe’s mother dies, she goes on the run, assassins try to kill her, and she stumbles on Avarosa’s bow.

There were slight differences in this retelling of her story, like the identity of the assassins and the added influence of outside characters, such as Lissandra, but it was more or less the same story.

The first issue of the series ended on a big cliffhanger with Ashe, her mother, and their tribe’s warriors surrounded and ambushed by an unknown foe, later revealed to be Lissandra’s cultists. We didn’t know how they knew to be here, why they were here, or what they wanted with Ashe. Fortunately, all of that was answered in this issue, as well as the “How does Ashe’s mother die?” question.

Overall, it was a solid issue. The fact that Riot and Marvel chose to essentially retell an old story didn’t leave a lot of room for creative twists and turns, but there were some pleasant surprises to fill the void a bit. It was still a little stale and predictable, taking it down a few notches from the high expectations set in the first issue, but it was solid.

The third issue of the Ashe: Warmother series launches on Feb. 20.