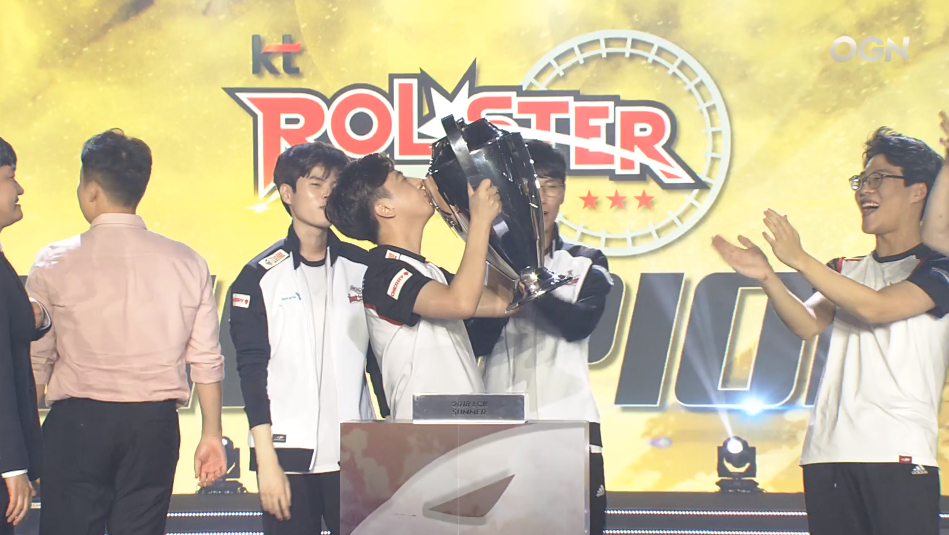 On the brink of defeat, KT Rolster made a monumental comeback to win the 2018 LCK Summer Split in a thrilling five-game series against Griffin today.

“Help Go “Score” Dong-bin reach LCK nirvana.” This was KT Rolster’s goal heading into today’s final. As the LCK’s oldest player, Score had yet to find a major domestic title in his almost seven-year career, despite being one of Korea’s best players.

Related: Can Score finally find his LCK crown this summer?

But although KT were the overwhelming favorites, helping Score reach LCK nirvana wasn’t an easy feat. With the LCK on a hiatus over the last few weeks due to the 2018 Asian Games, the in-game meta in Korea saw a massive change during this impromptu break. Suddenly, Urgot was the most powerful champion—and Griffin didn’t hesitate to first pick The Headsman’s Pride in game one.

But Urgot seemingly didn’t determine which team won. Instead, it was the AD carry Kai’Sa. Whether it was her AD or AP build, Kai’Sa was the key factor in Griffin’s victories in games one and three, as well as KT’s game two win. Kai’Sa’s high mobility and massive late-game damage decided teamfights in the favor of whichever team was wielding her at the time.

And this pattern looked to continue in game four. One win away from earning their first LCK title, Griffin were destroying KT in game four. But thanks to incredible engages by Cho “Mata” Se-hyeong, as well immaculate teamfighting by Song “Smeb” Kyung-ho, KT crawled back and eventually won game four, bringing the match to a fifth game while overcoming the monolith which was Kai’Sa.

With the entire series riding on one game, it was fitting that KT’s game five victory was led by their team captain who had been searching for LCK nirvana. On the counter pick Nocturne jungle, Score outclassed Griffin jungler Lee “Tarzan” Seung-yong in the early game. By the time Score had unlocked his ultimate, he and his KT teammates had amassed a major gold lead from the laning phase and were ready to unleash it all onto Griffin.

Although the LCK Summer Split is now over, there are still games left to be played in Korea. On Sept. 12, SK Telecom T1, Gen G, KINGZONE DragonX, and Griffin will face off in the regional qualifier to determine the final Korean team headed to the World Championship.