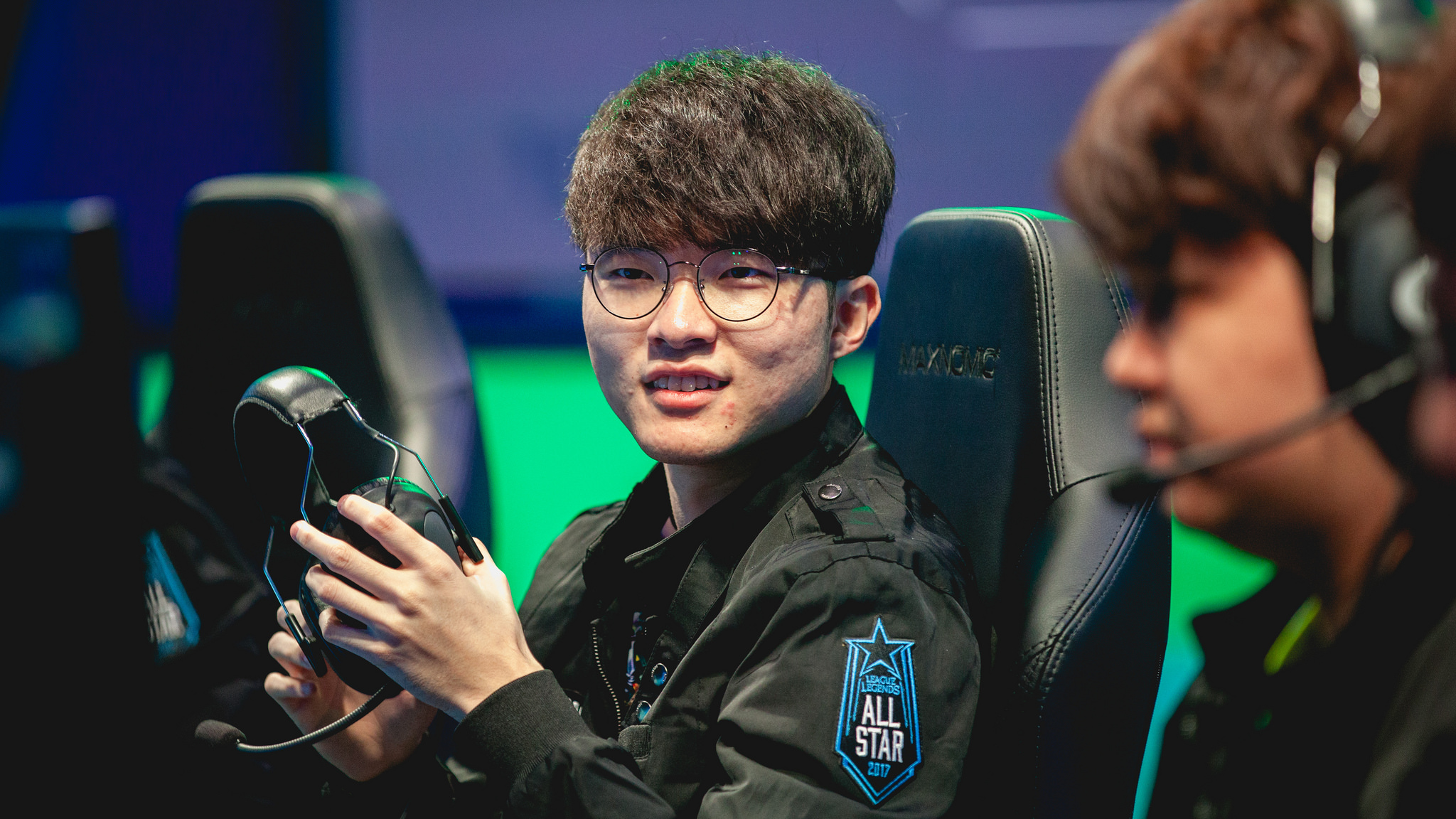 This sounds crazy now, but just over 12 months ago, there was some controversy over who the best player in League of Legends was.

For years, that title belonged to Lee “Faker” Sang-hyeok, the Demon King. But after Faker and SK Telecom T1 lost in the LCK playoffs, many pundits pivoted to saying that Song “Smeb” Kyung-ho, fresh off his first LCK championship, deserved that accolade. It was Smeb, not Faker, who grabbed first place in the player rankings prior to the 2016 World Championship.

What a difference a year can make. On its face, 2017 wasn’t a complete success for Faker, if only because the team lost at Worlds for the first time. But if anything, SKT’s uneven performances let us see just how important Faker is to his team. Multiple times, when everything fell apart around him, Faker still willed his team to victory. It was undoubtedly one of Faker’s best seasons, and he won an esports “Player of the Year” award to prove it.

In celebration of Faker’s achievements, we put together a list of his top 10 highlights from his amazing 2017 season.

One of Faker’s best qualities is his immunity to ganks. Often, teams send their jungle to help mid because Faker gives them no choice—he is that dominant in lane. So Faker has learned how to make plays out of those ganks. Sometimes, like in this one, when his spider senses get tingly, he just all-ins his opponent before help can arrive.

In this play, Faker dismantles ROX Tigers mid laner Son “Mickey” Young-min in a devastating show of mechanics. He’s so fast on the controls that the game doesn’t have time to render his Cassiopeia ultimate correctly. Faker is literally too quick for the game. This is an otherwise ordinary play, but Faker’s timing and ability make it special.

9) Faker slithers out of C9’s trap

Faker is good at avoiding ganks, but he can’t dodge every one. When Cloud9 jungler Juan “Contractz” Garcia found him in Cloud9’s opening game at the Worlds main event, Faker looked finished.

But Faker showed us that there’s more than one way to survive a gank. This time, the play resulted in two kills for SKT and a lead they would not relinquish. Gank Faker at your own risk.

8) Getting revenge on G2

G2 actually had a pretty good MSI last season. They made it into the final, got a game off SKT, and put to bed a lot of concerns over their international form. But getting first blood on Faker in the opening game against SKT seemed to just make him mad. When the two teams met in in the final, it was time for Faker to get even:

All League players have experienced moments like this, when you know you’re getting outplayed. All you can do is mash your buttons in panic, hoping something hits. That’s exactly what happened to G2 mid laner Luka “Perkz” Perkovic with his Orianna ult sombrero. That wasn’t really Perkz’s faut. It’s just Faker doing Faker things.

Faker really started regaining his mojo in SKT’s series versus rival super team, KT Rolster. KT signed Smeb in the offseason to compete with Faker, but despite some of the closest series of the year, SKT always came out on top. Even from impossible odds, Faker manages to find the perfect fight to break KT fans’ hearts:

Faker’s Fizz, coming out of nowhere with that ridiculous little fish, is one of the most terrifying things you’ll ever see.

Galio was one of the most overpowered champions near the end of the year. A mid lane terror that combined damage, CC, wave clear, and tankiness, with a semi-global ult to boot, made for an utterly ridiculous champion.

In their semifinal matchups against SKT, China’s Royal Never Give Up curiously decided to keep leaving Galio up. And Faker made them pay. Whether it was diving turrets or saving teammates, his Galio play was crisp as SKT survived another scare.

Don’t let Faker play an overpowered champion. You won’t live to regret it.

5) Don’t dance with a Demon King

Another on the list of don’ts, and yup, it’s more misery for KT fans. Honestly, they should be used to it by now. They’ve suffered through years of near-misses and heartbreak and 2017 was nothing new. The team that Faker styled on the hardest was KT. The second series of the summer split was Faker at his finest:

This is a simple play, but against, Heo “PawN” Won-seok, Faker always finds a way. PawN had a decent bounce-back year on KT, but Faker still makes him look silly sometimes. Even when PawN had help, it ended in disaster for KT:

If you’re counting, that’s three ultimates from KT that Faker survived. He is truly a magician with those escape moves.

This is more of a highlight for SKT’s gregarious top laner Heo “Huni” Seung-hoon, but Faker does show up near the end with a kill to save the day. How on earth did Huni get out of this?

Fortunately for LZ, that play didn’t tilt them and they still managed to beat SKT in the next game to claim their first LCK title. And this wasn’t the only time Faker saved Huni’s bacon.

3) Faker carries the series against Samsung

Everyone knows that SKT’s season ended in a sweep to South Korean rivals Samsung Galaxy in the finals at Worlds. To some, that invalidates everything Faker and Co. accomplished throughout the year. Those people are idiots.

Faker had a dynamite year. Just look at how he dominated Samsung just a few months before Worlds in the LCK playoffs. First, he picked Lucian and spanked Lee “Crown” Min-ho’s Taliyah.

Faker killed that Taliyah again and again. Afterwards, LCK caster Alberto “Crumbz” Rengifo could only exclaim that Faker “completely carried the hell out of this game.” Even when Samsung found big leads, Faker managed to bring his team back. He hit a Fizz ult onto Crown from an impossible angle to save game two.

Faker’s seriously good at Fizz. Samsung were so tilted after that and they quickly lost the series 0-3.

If history’s a guide, SKT will only grow from their Worlds defeat. Let’s hope that Samsung, under new ownership, will be up to the task of making this a truly great rivalry.

2) All of game four against Misfits

If 2018 was banner year for Faker, his series against Misfits in the Worlds quarterfinals may have been the pièce de résistance. SKT’s side lanes crumbled against Misfits’ ballsy engages and the Korean side went down two games to one. Facing elimination against a Western team, the whole squad looked to Faker to carry them in game four.

He delivered in one of the most dominating performances of the year. Benefiting from an early gank from Kang “Blank” Sun-gu, Faker was an absolute menace in that game. His was the only lane that went in SKT’s favor, and somehow he made it work.

When Huni needed saving again, Faker was there:

When SKT were holding desperately at the base, Faker was there:

And when SKT needed one last engage to end Misfits, Faker was the one everyone gathered around to go in:

Game four was a legendary performance from a historic player.

This was the highlight of the year. It’s no wonder that KT never found a series win against SKT, even after being up 2-0 in the summer playoffs. If you experienced this, you’d be tilted to the ends of the earth:

What a play, what a moment, what a year for the man many League fans call God. Here’s to you, Faker.