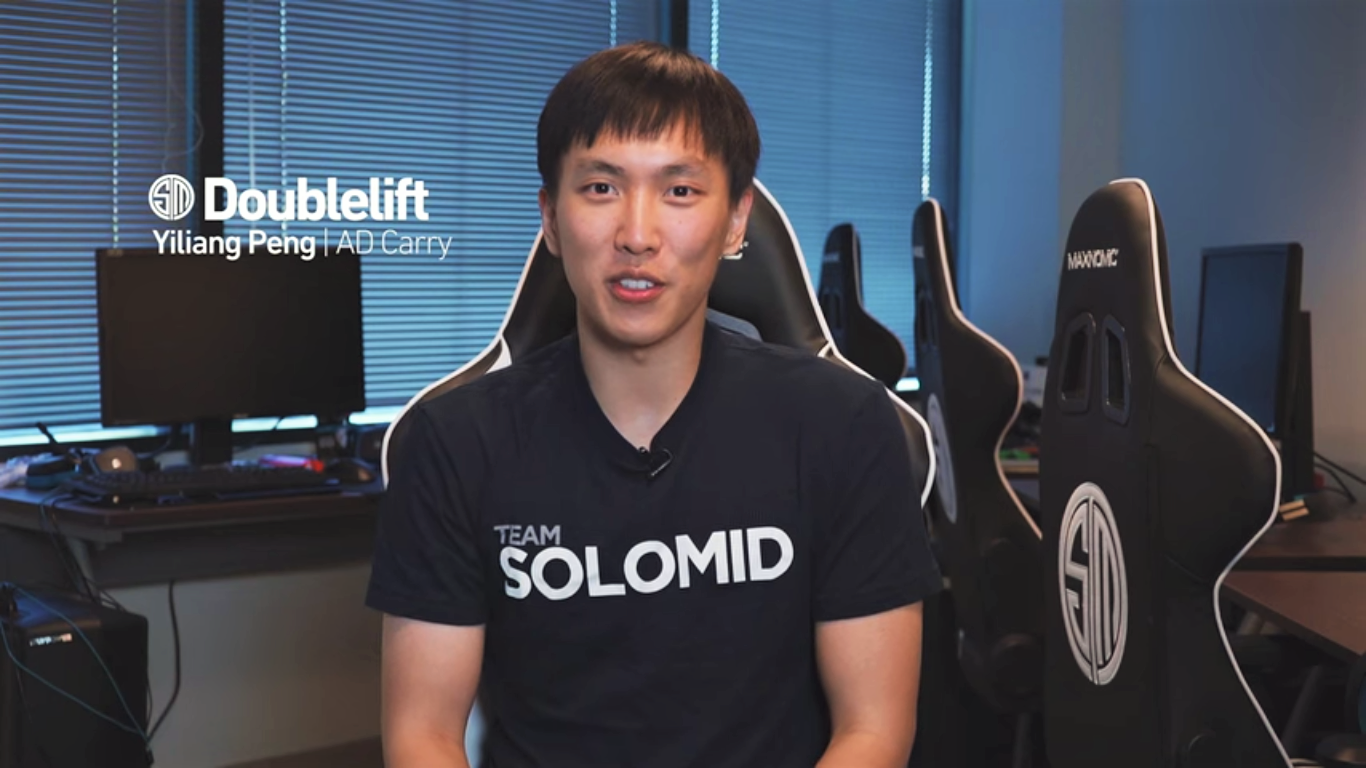 In one of the most shocking moves in the story of professional League of Legends, longtime Counter Logic Gaming AD Carry Doublelift has joined Team Solomid as their new AD Carry, replacing Wildturtle.  The announcement video can be found here below.

As with any roster change in sports, there are both winners and losers.  Following are those affected the most by Doublelift’s sudden transition to the Team SoloMid starting roster.

In what so far has been an offseason full of uncertainty, Team SoloMid has swiftly addressed one of their most glaring needs.  While WildTurtle was a major sensation in Season 3, his form has slowly began to dip to an inadequate level for a team aspiring to become truly world class.  For nearly two seasons now, TSM has been a single threat team.  Adding Doublelift gives them many more options.  With IEM San Jose around the corner, having Doublelift means that TSM can comfortably run a team composition with Lulu and be assured that their AD Carry can bring the team to vicotry.  Additionally, having Doublelift will lift pressure off of other players in the pick/ban phase.  With the two players who arguably have been tasked to carry harder than any two other players the last two seasons in North America on their roster, a whole new realm of strategical options can now be explored.

However, the biggest victory for Team SoloMid in acquiring Doublelift is that they just made the biggest public relations coup in North America since their own decision in Season 2 to participate in domestic LAN competitions rather than traveling to Korea like their counterpart, Counter Logic Gaming.  This is truly the mark of a major shift in fan base movement.  Heck, in less than twenty four hours after the debut of TSM’s YouTube announcement about the roster move, the released video already has over a million hits.  Doublelift, being the last great player from Season 2 in North America, has assembled an army of fans during his tenure on CLG.  Had he left for a team with a lesser reputation, more of his fans would likely have stayed true to Counter Logic Gaming.  Nonetheless, by joining TSM, fans know that he will continue to play at the highest level of competition, potentially reaching even greater heights than under the banner of CLG.  Through Doublelift’s best Benedict Arnold impersonation in donning the black and white jacket, Team SoloMid removed any doubt that they weren’t the fan favorites in North America.

In comparing the off-season of TSM and CLG so far, there’s a stark difference in the types of moves that each team has been making.  Reginald, the owner of TSM, has shed old or irrelevant parts.  Gone are Dyrus, Lustboy, WildTurtle, and Santorin, while Locodoco has been removed from the positon of head coach into another role within the organization.  With all due respect to the players, only Lustboy was the player who really came as a shock to fans upon his release, but battling wrist issues, his decision to step down was more than reasonable.

On the other hand, HotshotGG, the owner of Counter Logic Gaming, has let Pobelter, Doublelift, and head coach Blurred Limes go.  Unlike TSM’s moves, neither Pobelter nor Doublelift seemed to be hampering the team.  Realistically, this was Pobelter’s first split on the team, and he helped guide CLG to their first domestic title.  The discharging of Blurred Limes seems more reasonable, as a “breach of trust” occurred.  While there was never an official statement on what happened, it would be reasonable to infer that Blurred Limes needed to go.  On the other hand, Pobelter and Doublelift didn’t need to be released.  While HotshotGG keeps claiming that the moves that the team is making will only make them stronger, watching your former AD Carry, who is arguably the best in North America, move over to your arch-rival has to sting.  While TSM is coming up with answers to their issues, HotshotGG is only creating more questions.

For the first time in his tenure on Team SoloMid, the Great Dane will not be the only hard carry.  The burden released from Bjergsen’s shoulders is immense, as no longer will other teams be able to simply focus playing around him.  In the past, junglers have been able to shut down TSM by knowing that Santorin would be by Bjergsen’s side, trying to snowball the only lane that TSM would consistently win.  This granted other teams great freedom to prey on the other lanes, oft snowballing the other two.

The most talented team that Bjergsen played on was the 2014 pre-Worlds incarnation of Team SoloMid, but unless Reginald makes catastrophic blunders as General Manager, this next team is almost guaranteed to be better.  No longer forced to hard-carry games, we may see a Bjergsen who is able to focus more on his duties as shot-caller, and accordingly a stronger macro game from TSM.  As long as Reginald is able to find players for the remaining roster spots who can support their two carries and are able to consistently go even in lane, Bjergsen looks to finally be able to unleash his true potential.

A fairly clear-cut loser, Wildturtle has lost his spot on the Team SoloMid starting roster.  Regardless of what team he ends up on next, Wildturtle had the opportunities to participate in numerous international competitions wearing the TSM Letterman’s jacket.  Now on their substitute roster, he will in all likelihood not end up in a position to play in such matches again.

In my opinion, there is still a silver lining for Wildturtle.  Numerous teams are looking to fill AD Carry voids on their roster, and I would be surprised if he failed to find a starting spot on some lesser team, such as the L.A. Renegades.  If he’s able to join a team that doesn’t have a spotlight constantly shining on them, there’s the potential that Wildturtle is able to get back to focusing on the basics.  No longer under fire from the keyboard warriors of social media, Wildturtle could get back to just simply being himself.  He seems like a great teammate out of the game, and perhaps joining a lesser team could be the jumper cable he needs for his career.

In a similar fashion to Bjergsen, Doublelift has been the primary carry on his team for years.  In the most recent iteration of Counter Logic Gaming, Zionspartan began to blossom into a strong carry in his own right, but as proven at Worlds, Zionspartan still is found wanting in comparison to other international top laners.  In fact, the only person on CLG who really performed at an equal, if not greater level than their international counterparts was Doublelift.

“First, I think that our goals are in perfect alignment. I just want to do the most I possibly can at an international level, and that’s what Andy [Reginald] and Bjergsen have promised me…Winning NA is just not good enough for me anymore.”

Looking at a position in specific, Doublelift has never played for a team with a true star in the mid lane.  Bjergsen is obviously one such talent.  Just as this move is going to finally free Bjergsen, Doublelift will likewise find himself with less burden on his shoulders in realizing his team’s success.

Considering the move from a personal standpoint, Doublelift appears to have kept many of his fans from Counter Logic Gaming while simultaneously moving to an organization that has the reputation of being the premier North American team internationally.  The last time that Team SoloMid did not play in an international tournament was 2014 All-Stars in Paris.  After going to Worlds this season, Doublelift  wants more, and moving to Team SoloMid brings him closer to those opportunities.

Once again, Reginald has made a momentous move for Team SoloMid, securing a top tier talent for the organization.  Out of the AD Carries fluent in English, Doublelift has to be one of the best.  Securing one of the more gifted talents to come out of North America while bolstering the strongest fan base in the world, Reginald comes out looking like a genius.

But really, is Reginald making bold moves that benefit TSM new news?  Unlike other General Managers in North America who have gambled on talent and lost, Reginald has consistently, save for acquiring Gleeb, made moves that have not only made TSM better, but have produced results.  No other GM can say the same.  A man driven by results rather than adequacy, Reginald continues to cement his status as one of the top GMs in North America.

To Be Decided: Aphromoo

Let this sink in for a minute: Aphromoo has never played in a competitive LCS match without Doublelift by his side.

This is unquestionably the biggest turning point in Aphromoo’s career.  In an interesting way, it parallels the predicament Yellowstar found himself in last year around this time as the rest of his roster, including AD Carry Rekkles, all left for supposedly greener pastures.  In a “put up or shut up” situation, Yellowstar managed to find the strongest Velcro out there, strapping the colossal weight of Steelback onto his shoulders and carrying Fnatic to first place in the EULCS Spring Split.  In doing so, Yellowstar cemented himself as the strongest European support.

Aphromoo, now without his stellar AD Carry, must adjust to another.  If Counter Logic Gaming finds a new player to fill the void, Aphromoo will have to train and carry the rookie in order to achieve success.  If CLG signs a known talent, such as Freeze or Forgiven, Aphromoo will have to perform at an equal, if not greater level, than his new partner in lane.  If Aphromoo fails to excel without Doublelift, he will be faced with criticism and accusations of being “washed up.”  However, while this undoubtedly a great challenge for Aphromoo, Doublelift’s departure is an even greater opportunity.  Should he succeed in forging a powerful new CLG bottom lane, he will make his own stake at Xpecial’s claim to the best support player produced by North America.