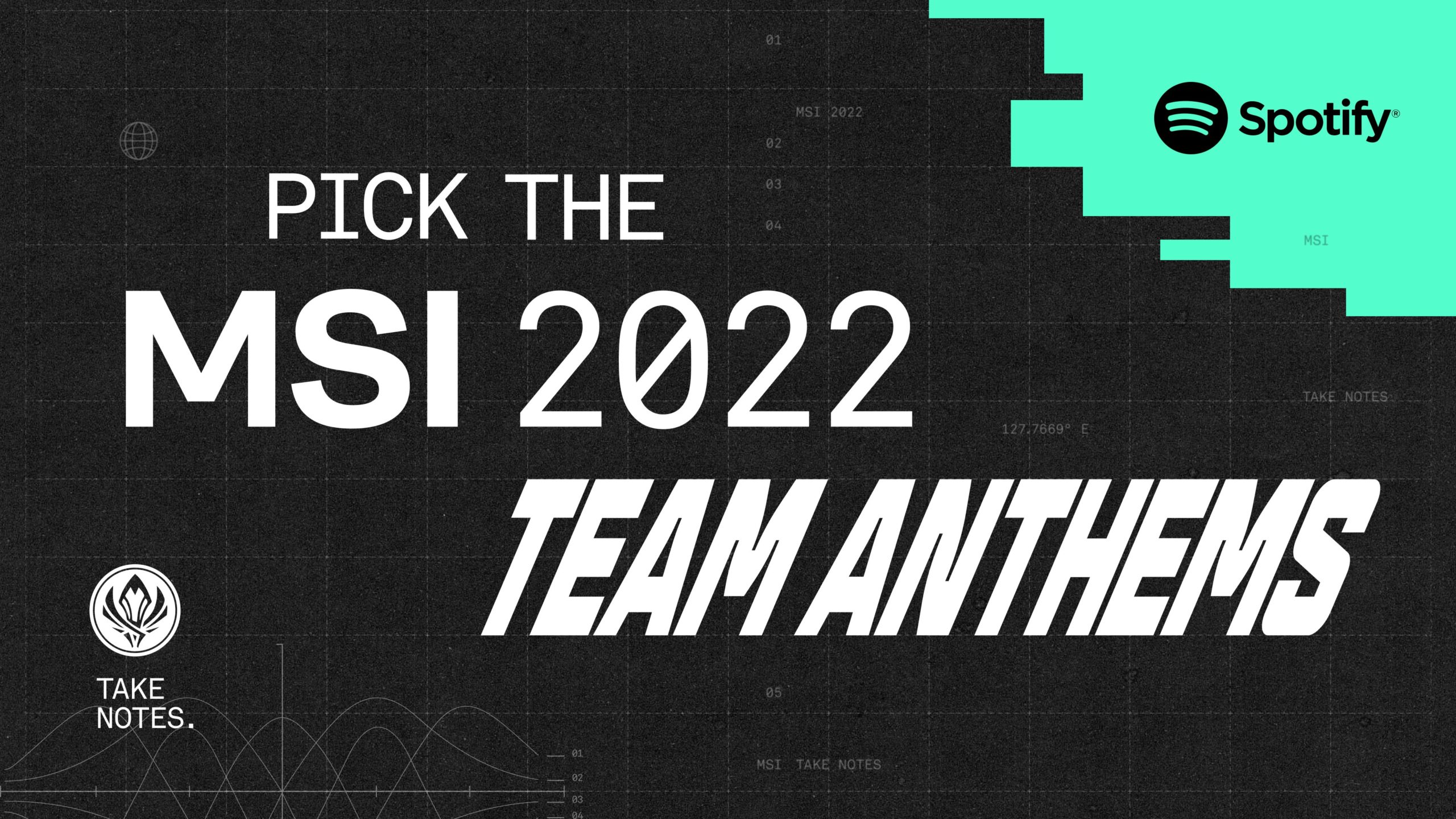 As per tradition, for the 2022 Mid-Season Invitational, the attending teams were supposed to choose their personal anthem for the League of Legends tournament. However, this time, Riot Games let the fans pick the best song to represent each of the eleven participants in MSI through a survey on the lolesports Twitter account.

Some results were an obvious choice, but others came as a surprise. From the Ratatouille movie soundtrack to an anime opening, with Lil Nas X in between, one thing is certain: the MSI 2022 playlist will be one to remember. Here are all the MSI teams’ anthems, hand-picked by the international League community.

At the beginning of 2021, T1 partnered with artists Baekhyun of EXO, CHANGMO, and Raiden to create an intense track that traces the past and hails the present of T1 as legends. To the sound of “Watch your back and overhead and your team, ‘cause I’m the legend of the street,” T1 will show up at MSI 2022 as legends to beat.

“We shall yet prevail” were the words sung by G2’s CEO Carlos Ocelote at the beginning of the year in the first-ever song produced by the team. And after the surprising 12-0 run by the European team, there was no doubt G2 prevailed in their call for redemption. The community couldn’t choose a better song than “Our Way” to accompany the European kings during MSI.

Louder than a lion, fastPay Wildcats will enter the MSI stage to the roaring sound of this Kety Perry song. Although this song would not enter the playlist of a usual esports team, “Roar” sends a loud and clear message from the Turkish team: “I am a champion, and you’re gonna hear me roar.”

There’s got to be an inside joke about this. With a crushing 41 percent of votes over the other choices, the song that represents the Brazilian team in MSI is the song “Le Festin” from the Ratatouille soundtrack. It may be that the move’s inspirational quote might be re-adjusted for esports competitions as well: “everyone can win.”

Coming from Latin America, Team Aze plan to blow up the competition, like “Dynamite.” The energetic and world-famous song performed by BTS has been chosen to accompany the newcomer to MSI 2022. Instead of taking notes, it seems more like they want to bring the fire and set the competition alight.

Coming from the Oceania region, ORDER are “fired up and tired of the way things have been.” The fans made them a “Believer” by choosing this Imagine Dragons song as the team’s anthem. After the region’s previous representatives knocked down the competition at MSI, ORDER now have the arduous task to keep on believing and achieving higher results.

How does one measure the knowledge and love that a community has for a team? You let them pick a song to hype the team at their first international event of the year. Once again, “Gurenge” by Lisa is the song that will accompany Detonation FocusMe at the Mid-Season Invitational. Seems like the song is perfect to describe this symbiosis the Japanese team has with the League community: “Finally, you’ve given me a reason to be strong. And we’ll stand hand in hand till the end.”

The battle for the Vietnamese team’s anthem was a hard-fought one, but in the end, the community chose the 2014 World Championship song “Warriors” to accompany Saigon Buffalo Esports at MSI. No better song embodies the perseverance esports players must show when chasing a dream than this legendary track.

PSG Talon “wanna be the very best” and claim their rightful place among the best of the world, and the Pokémon Theme Song will accompany them throughout the 2022 MSI. PSG Talon embarked on a quest to catch all trophies, but if their region’s gym was easy to conquer, they will have to train harder to defeat the trainers that arrived from all over the world to MSI.

Royal Never Give Up: GALA—追梦赤子心 (Chasing Dreams With a Child’s Heart)

For Royal Never Give Up, the community chose a Chinese song called “Chasing Dreams With a Child’s Heart”. A heartfelt song that encourages listeners to persevere through hardships, and see “the glory of life.”

“This one is for the champions,” and the champions in question are Evil Geniuses. The community chose Lil Nas X’s song “Industry Baby” for the new LCS giants. Even if the team aren’t the favorites to win the competition, with this anthem, it shouldn’t be a problem: “you was never really rootin’ for me anyway/When I’m back up at the top I wanna hear you say he don’t run from nothin’.”