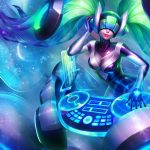 League of Legends has a rich lore that makes everything inside the game quite meaningful, but that doesn’t mean Riot Games releases skins without unique backstories attached to them. Each skin line hits the in-game market with engaging alternate storylines, and it just adds to the overall quality and joy you’d get out of each skin purchase.

When it comes to the best and favorite skins of League players, however, it’s quite hard to make a judgment call. Selecting poorly designed skins is one of the easiest tasks in the world, but a lot of variables get introduced when it comes to picking the best of the best. Most players naturally end up picking the skins that were released for their favorite champions, but we mostly focused on the visual improvements that each cosmetic introduced to its respective champion while compiling the following list.

Taking visual effects into consideration can be a double-edged sword as well, though, since more recent skins will obviously be better than the older ones. Considering Riot improves each skin line, it isn’t really a surprise to see the older skins slowly fade away over time.

Here are the eleven best skins in League that’ll make you feel like you’re playing a completely different game. 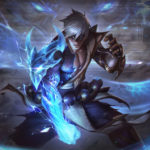 Including two skins in a single entry may look like cheating, but it’s hard to separate some of the duos that play an essential role for each other.

Both featuring some of the best artwork and in-game animations that the League world has seen so far, Storm Dragon Lee Sin obtained his powers from Storm Dragon Aurelion Sol.

Storm Dragon Aurelion Sol was also teased as Ao Shin back in 2013 only to arrive in 2020, and Lee Sin even criticizes his timing in a reproachful quote: “You’re late, Ao Shin. SEVEN years late.”

While Storm Dragon Lee Sin is priced at 1,820 RP, Aurelion Sol goes for 1,350 RP, and we also recommend checking out the other Dragonmancer if you enjoyed the overall vibe of these two. 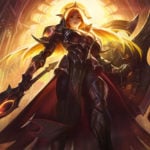 Riot took steps to introduce more anime-style skins with the Spirit Blossom skin line, but there were already some marks of the art style inside the game prior to its release.

Solar/Lunar Eclipse Leona looks just like your formidable warrior from any medieval-themed anime show. Anyone that fondly remembers the first season of Sword Art Online is guaranteed to fall in love with the skin, and its lore suggests that Eclipse knights are on a crusade against the members of the Coven.

While each version of the skin rocks the same iconic armor, their spell animations’ color scheme is entirely different.

Both versions of the skins retail for 1,850, but buying one of them also makes you eligible for a 45-percent discount for the other, meaning you can get the whole bundle for less than 3,000 RP.

Most alternative universes that revolve around League have serious matters that need to be dealt with. The more epic ones drastically outnumber the lighthearted ones, and the Dunkmaster skin line is an excellent breath of fresh air in general.

Dunkmaster Darius is one of the oldest skins on our list, but it definitely aged like a fine wine. The absurd and out-of-character voice lines of the skin are enough to keep him relevant to this day, and he never fails to increase the adrenaline levels of whoever is playing him.

Dunkmaster Darius goes for 1,820 RP in the store and lets you in the journey of an alternate Darius that decided to become the world’s best dunker while he was a promising basketball prodigy. 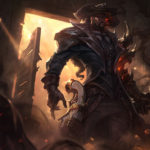 Another pair we have on our list is High Noon Lucian and High Noon Senna. It took almost six years for Lucian to reunite with his beloved Senna, and Lucian’s long-lost love quickly accompanied him in one of the most iconic skins of the champion.

Senna joined the High Noon alternative universe as an Angel, and Lucian was already a part of it as a cowboy since 2018. Both skins cost 1,820 RP, and rolling toward bot lane with this duo with your High Noon skin on should be more than enough to strike fear into your enemies’ hearts. Rakan and Xayah players may need to watch out for this duo.

Jhin has been one of the most sensational AD carry champions released in the last five years. He plays completely differently from any other AD carry champion in the game, and he also has the most flavorful lore of the entire League roster.

We’ve seen some great Jhin skins in the past like the Blood Moon, which allowed his artistic side to shine, or High Noon, which turned Jhin into a Western movie villain. Dark Cosmic Jhin, on the other hand, can be the leading role in an interstellar thriller movie.

Priced at 1,820 RP, Dark Cosmin Jhin features the artistic champion as an interstellar entity that was consumed by the Dark Star. Dark Star turns him into a world-devouring being that’s quite close to Marvel’s Galactus.

There are a few types of collectors in League. The ones who are looking to collect all the skins for their favorite champions and the ones who’d like to have at least one skin for each champion in the game. When it’s the latter, you’ll want to collect the best skins to increase the quality of your collection. The visual quality, effects, even the colors will have a role, and Elementalist Lux is one of the rare skins that has it all.

Elementalist Lux has 10 different alternative looks. From Air to Fire, you’ll be able to switch forms as long as you collect enough energy. You’ll be able to accumulate energy by attacking enemies. With two chances to change your form throughout a match, you’ll also be able to create cool combinations.

The Spirit Blossom skin line was Riot’s first official attempt to experiment with Japanese aesthetics. Riot also used the occasion to introduce Yasuo’s brother into the game, which turned the Spirit Blossom event into a milestone for the MOBA.

While all the skins that are a part of the skin line are tremendous and have excellent animations, Spirit Blossom Thresh steals the show since it features an unmasked Thresh. You heard right—it’s the first Thresh skin that features the actual human face of the champion. And the sad truth is, the soul demon looks badass.

It quickly became the favorite skin of countless Thresh mains and the majority of the community. With a price tag of 1,820 RP, Spirit Blossom Thresh comes with some unique voice lines that shed light on Yone’s lore.

Battle of the God-Kings is Riot’s take on one of those epic fantasy war novels. It may sound cheesy, but the storyline definitely has the potential to turn into a TV show. God-King Darius’ side wants nothing more than endless war, while God-King Garen fights for an eternal reign.

Considering both sides seem to be equally bad, we’ll just go with whoever wins the fashion war, and it’s Garen. This is hands down one of the most intimidating skins in the game and makes you think not twice, but thrice before engaging him.

For 1,820 RP, God-King Garen features the top lane veteran as a fearless commander who has thousands of battles worth of experience, and no one would like to mess with that.

Each skin in League has a certain vibe going for them. Not all of them are lucky enough to change it throughout a match, however. DJ Sona is one of the lucky few and you’ll practically become an actual DJ as you’re playing Sona.

The color and the beats that the skin drops are top notch and your teammates start flooding the in-game chat with song requests. Considering keeping the morale of your team is a top priority in League, if you’re looking to increase your odds of winning, you may need to make a list of what tunes to play next to keep everyone happy.

DJ Sona was released in 2015 and it costs 3,250 RP. Though it’s been a while since her release, DJ Sona is still one of the best skins in League.

When the Star Guardian skins were introduced to League, players welcomed them with open arms and got excited about the cool skins they would add to their collections.

Not everyone was happy, however, since there was a decently sized majority that also wanted to see Urgot as a Star Guardian. The community cheered for a Star Guardian Urgot for years. After countless fan arts and Reddit threads, Riot finally gave in and released Pajama Guardian Cosplay Urgot.

The skin removes Urgot’s dark aesthetics and turns him into a magical Star Guardian who’s taking a break to enjoy a pajama party. Though this skin isn’t entirely a Star Guardian skin, it’s probably the closest thing the fans will have to it.

It’s no surprise that League skins became more advanced over the years. The earlier skins in the game also received updates, but the new ones tend to be better in most cases.

Dawnbringer Soraka is a prime example of this. The skin is one of Riot’s finest works since the attention to detail is off the charts. The wings and the overall texture of the skin speak for themselves. Though Dawnbringer Soraka may look all high and mighty, it also has a banana emote, a true part of Soraka culture.