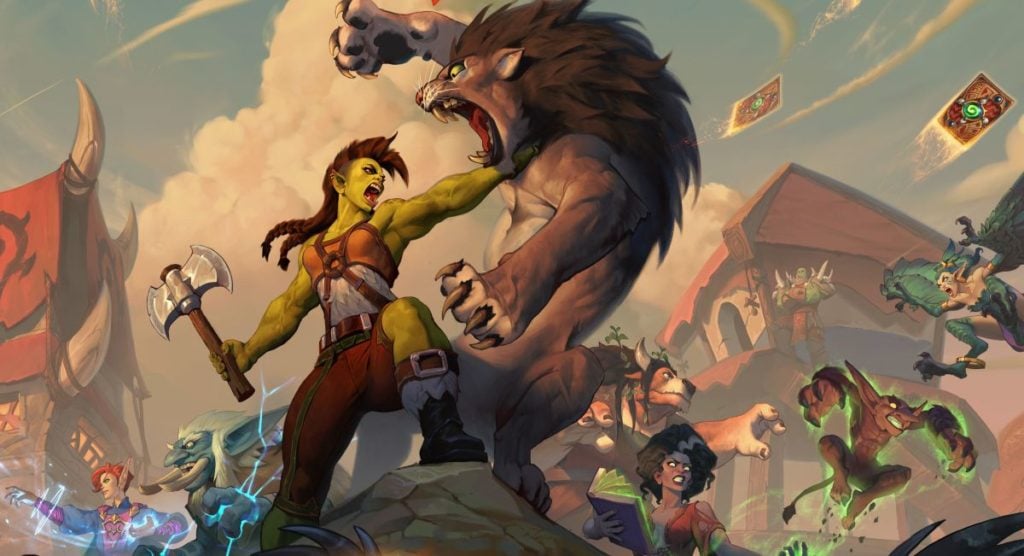 During Hearthstone matches, you might find yourself facing a new class you’ve never battled before or have rarely faced due to their absence from the ladder or casual play. There is no definitive counter to every class in the game since every player uses different decks and strategies. But there are some tips and tricks to counter any Hearthstone class in Classic, Standard, Wild, or Casual.

Here are some tips to counter all Hearthstone classes.

Demon Hunter, the latest addition to Hearthstone, has various archetypes they can play, but their main goal usually defaults to burning their opponent down with early game creatures. While there have been attempts to create a Control Demon Hunter, the decks usually find themselves returning to an Aggro or Midrange version.

To counter this class, which has access to a one-mana hero power to gain one attack damage during the turn, you need to pay close attention to the board. Avoid leaving one-health minions alive on your side of the board since they’ll be easy prey for your opponent. Try to maintain your Taunt minions in hand until the later stages of the game. This stops the opposing DH from attacking your face with his weapon or huge minions. Avoid using them early on unless strictly necessary to control the board.

The Druid class is notorious for having two main archetypes: A token-oriented one with various board buffs and a Ramp or Control druid. By correctly identifying which deck the opposing Druid is using, you can build a game plan.

Against Token Druids, look to control the board early on and try to avoid leaving creatures alive since they can easily be buffed up next turn and unleash a flurry of attacks. Ramp Druids are slower by nature and will most likely ignore the board early on, so look to build an advantage and try to put him on the backfoot.

Hunters usually aim to pick up an Aggro deck with cheap minions or look towards building a Midrange deck with a wide array of Beasts. With plenty of tools at their disposal, Hunters are quite deadly and can land fatal blows by the fifth turn if you’re not careful.

Against Aggro variations of Hunter, trade early on and use defensive spells that give you Health or Armor to avoid getting in lethal range. Try to get rid of the Beasts first to avoid getting Kill Commanded for five damage. Without a Beast on board, the spell will only deal three damage for three mana, which is not very high.

If you’ve encountered a Midrange Hunter, then be careful with your removal spells and try to save your tools for the mid to late game, when the Hunter will begin pumping big creatures on board. Don’t waste removal early on cheap minions since that will give an innate lead to the opposing player.

Mages are quite hard to counter due to their wide array of archetypes. Some archetypes include No Minion, Secret, Highlander, Hero Power, and more.

By trying to identify the deck you’re facing, you can begin to build a strategy. Against No Minion, the plan is to build a board and kill all opposing creatures your opponent might get from randomly generated effects. Against Secret, you need to think which Secret they might have and play accordingly by testing with a cheap minion or spell. Most decks will always use the powerful Core Set Mage spells, so playing around them should be your priority regardless of the archetype you’re facing.

Paladins usually play around with Aggro or Midrange types of decks using Librams or Secrets as the backbone of the deck. They are pretty hard to deal with since their Secrets have massive power for only one-mana cost. Even if you know the Secret you’re going to trigger, it could be challenging to overcome its effect and maintain control of the board.

Saving single target removal for a buffed-up target and making sure to minimize the Paladin’s board presence is a good recipe for success. You want to ensure that you always have a silence, destroy, or transform effect in your hand to stop the Paladin from snowballing. If he manages to buff up a minion to huge stats, he might just run away with the game, and you won’t be able to do anything. As for the Secrets they might play, always try to think which one it might be and test it out with cheaper spells or creatures. It’s better to attack with a one-attack creature to test for Noble Sacrifice instead of wasting your ten-attack creature attack to verify the Secret.

Priest isn’t as popular as other classes due to its lackluster hero power that allows them to pivot into a Control deck. Blizzard tried to create more archetypes by printing support for Shadowform, which modifies Priest’s hero power, but it isn’t enough. Priests usually have a lot of board clear or single-target removal, so you need to avoid putting all your eggs in one basket.

Spread your buffs across multiple minions and be wary of Priest’s tools to disrupt your board with various spells. These force your minions to attack each other or get destroyed if they have more attack than a certain threshold of Shadow Word cards.

Rogues are notorious for using Combo cards or various spells to buff up their weapons and take over the game. With every expansion, new archetypes pop up, making the class hard to counter since players need to adapt and adjust their game plan constantly. The main goal is to tunnel as much damage as possible in their face since they don’t have much sustain in their cards and are prone to dying quickly compared to other classes.

If the Rogue player is running weapon-oriented decks and you can’t seem to withstand their pressure, aim to tech in an Ooze to destroy the buffed-up weapons. Against Combo or Tempo Rogues, maintain board presence early on and don’t let them run away with the board; otherwise, you’re in for a bad time.

Shamans are either at the top or the bottom of the feeding chain but never in between. There are several viable archetypes you might encounter in your games. The most popular ones are Midrange, with a mix of spells and minions to maintain control of the board while also allowing the player to push in for face damage if necessary.

Disrupting the board and not overextending with minions is the key to win against Shamans. There’s no need to push in with all your minions at one time since the Shaman might turn the tides with a huge board clear and secure a Tempo lead. Slow and steady is the name of the game against this class, which isn’t as explosive as others and is either really good or really bad.

Warlocks seem to always find a way into the meta with either a Zoo or Control version. The main reason for Warlocks being so popular is their hero power that allows them to trade two health for a card, which is quite impactful. While Zoo doesn’t really care about their life total since they rush opponents down much faster, Control has a huge set of tools to regain life, and so the life loss is negligible.

Against Zoo, look to control the board and feel free to spam all the creatures you have. They will spew new ones every turn, and you need to be ready to answer with the same coin. Against Control, be calculated with your moves, and don’t waste removal on cheap minions. Keep it for the more powerful creatures the Warlock might play, and don’t flood the board into a Twisting Nether.

Warriors, the kings of Control in the Classic format, have fallen from grace over the years as other classes took their Control spots. After dominating the meta as the best Control deck, multiple classes overtook Warrior and became much more powerful over the years. As a result, the class pivoted into other archetypes to maintain competitiveness. One such archetype is Tempo Warrior, which has many early-game minions with Enrage and Rush to buff up other cards. Trade against the minions and don’t let them live on board too much, or the Warrior will run away with the game.

If, however, you encounter a rare Control Warrior, buckle up for a long game and war of attrition. They are quite hard to take down due to the two-armor hero power, making the match a huge stalling game. Both parties need to think carefully about how they’re utilizing every single resource.