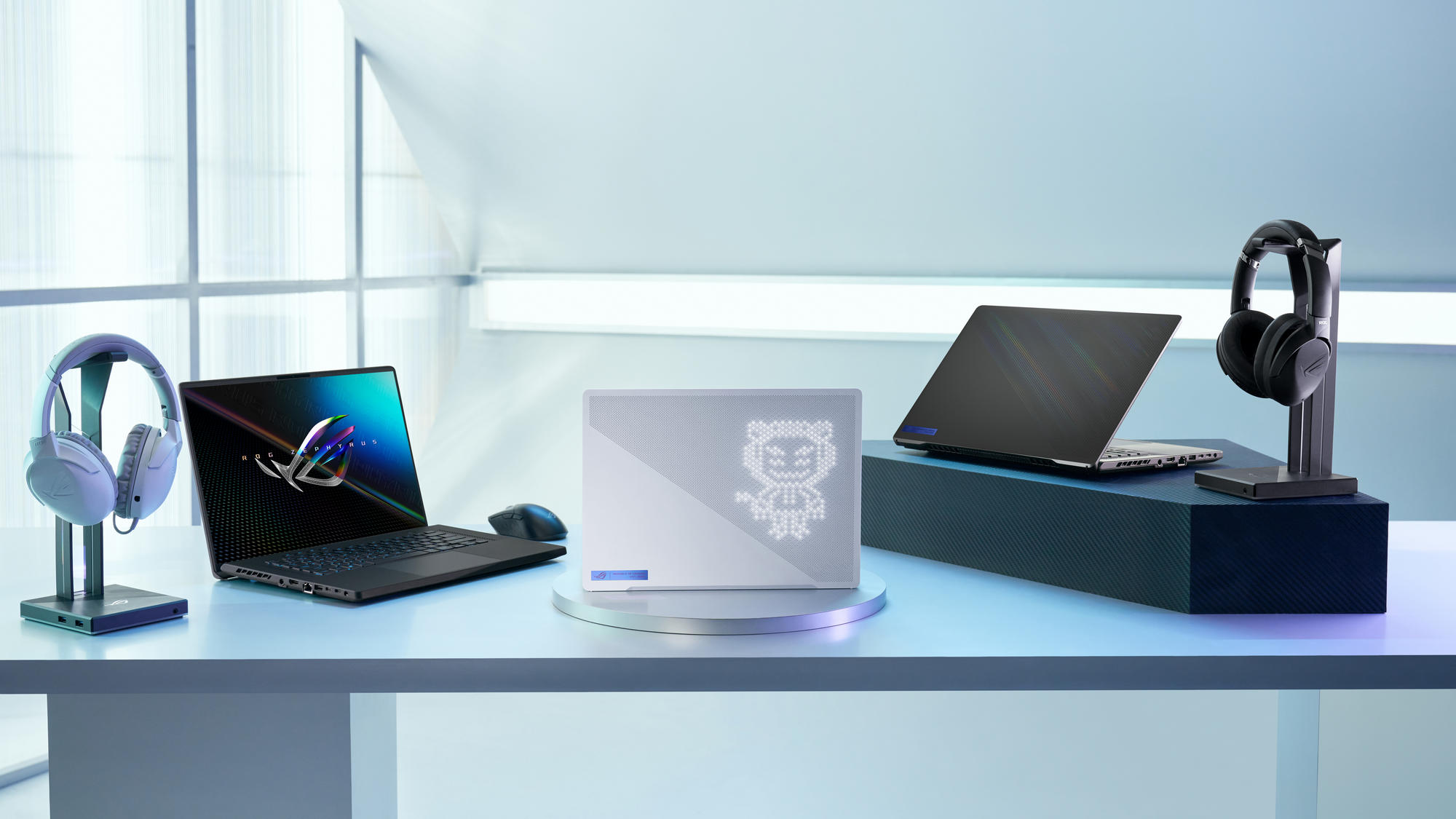 Despite the impacts of COVID on the event, ASUS ROG still brought plenty of power to kick off the start of CES 2022, adding the power of the RTX 3080 Ti and RTX 3070 Ti, plus AMD and Intel’s latest mobile chips, into their laptop range.

The main headline from ASUS ROG’s CES 2022 announcements — the rest of the ASUS range is due to be revealed tomorrow — is the inclusion of Nvidia’s flagship Ti GPUs into their gaming laptops. ASUS claims the mobile cards will be offer more power in the smaller chassis than the original desktop TITAN RTX, and 70 percent more performance than the RTX 2070 SUPER GPUs in the previous generation of laptops.

It’s not just the CPU and GPUs that have been updated. ROG Nebula HDR is a new inclusion in the ASUS ROG Zephyrus Duo 16, providing a mini-LED screen with 512 dimming zones and a maximum brightness of 1100 nits.

DDR5 memory has been added into ASUS’s laptop line as well, with 5200MHz LPDDR5 RAM now standard in the minimalist ROG Flow Z13.

Those are just some of the highlights. Here’s all the announcements in full.

On the quality of life front, the SCAR and Strix G have been updated with a MUX Switch for improved GPU performance, a larger trackpad, Dolby Atmos spatial sound support, two-way AI-powered noise cancellation for remote calls, a 90Wh battery and 100W USB-C charging, and Wi-Fi 6E support.

The Zephyrus line has been one of ASUS’s biggest laptop hits since its introduction, and unsurprisingly the range has gotten the latest hardware updates this year. The updated G14 will ship in 2022 with Windows 11, Ryzen 9 CPUs and Ryzen RX 6000S-series mobile GPUs, DDR5 RAM, as well as a MUX Switch for improved GPU performance.

The 2022 G14 will also include a slightly less powerful version of the 16:10 Nebula display, supporting a maximum brightness of 500 nits, a 1440p/120Hz screen and 100 percent coverage of the DCI-P3 color gamut for content creation.

For those after the slightly larger Zephyrus G15 and M16 models, they’ve also been refreshed with the new AMD and Nvidia hardware, and Wi-Fi 6E support.

The dualscreen has new display technology as well with Dual Spec, a feature that allows fast-switching between 4K/120Hz or 1080p/240Hz for the situation.

In a more practical change, the Zephyrus Duo 16 is now the size of a traditional 15-inch laptop, making it a fraction smaller than last year’s iteration. ASUS also reconfirmed that Dying Light 2 would ship with exclusive support for the dualscreen technology in the Zephyrus Duo 16, although there were no specifics about what that would look like in-game.

Pre-built gaming desktops (and laptops) have become increasingly popular throughout the pandemic, especially as new CPUs, GPUs, and DDR5 RAM are difficult to acquire.

If you’ve got a laptop, chances are you’ll want a bag to carry it in. There’s no shortage of options available — almost every bag these days has some concession for laptops or tablets — but ASUS has introduced their own Archer line of bags.

It’s available in four options: the Archer Messenger 14 (for 14-inch laptops), the Archer Backpack 15.6, the Backpack 17 and the Archer Weekender 17. Exact release dates and pricing will be released later in the year.