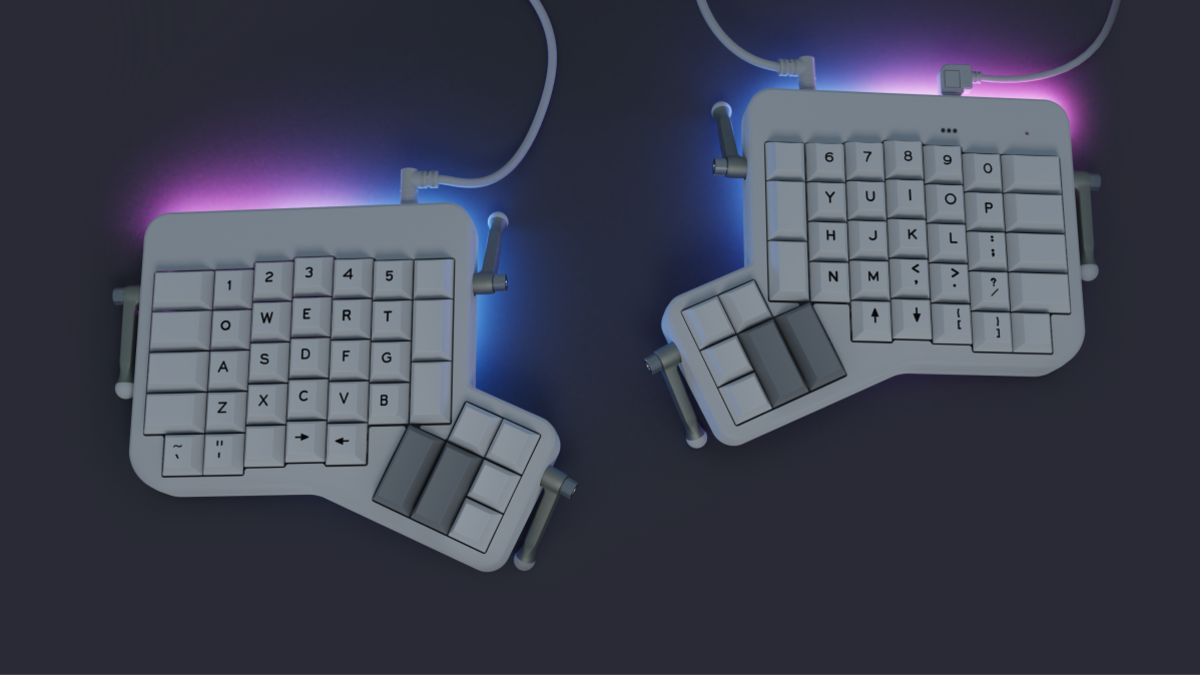 Most keyboards use a QWERTY layout originally designed for typewriters. While most people use these keyboards daily, they aren’t the most ergonomic options and can cause repetitive strain injuries (RSIs) over time.

Split keyboards are designed to be more ergonomic and place users’ hands in a more natural position. Apart from hand positioning, split keyboards also help with posture by placing each side of the keyboard at shoulder width. When each half is at shoulder width, the user sits more upright with their back straight instead of hunched. Having each half of the keyboard separate also keeps the user’s hands further apart, so their wrists aren’t pushed together in an unnatural position.

These are the best split keyboards for gaming.

The Kinesis Freestyle Edge RGB is designed specifically for gamers looking for comfort and performance. It’s packed with features like mechanical switches, dedicated gaming keys, and a plush wrist-rest.

Kinesis added several design features to make the Freestyle Edge RGB as comfortable and user-friendly as possible. The split-keyboard design improves users’ posture and allows them to adjust the distance between each piece for better comfort. Users can even use the left side as a standalone keyboard for gaming. Another comfort feature is the thick wrist rest. Instead of a hard piece of plastic like on other keyboards, this wrist rest is soft with thick cushioning to provide ample support. One unique feature is the nine programmable keys on the keyboard’s left side that work as in-game shortcuts.

For a smaller brand, Kinesis adds surprisingly comprehensive software for customization. Kinesis’ Smartset app opens up a range of customization options for users. It lets buyers configure the dedicated gaming keys and the per-key RGB lighting. There are also nine available profiles, and users can configure up to 100 macros on each one.

As far as split gaming keyboards go, the Freestyle Edge RGB offers impressive functionality. It gives users multiple switch and comfort options for a better gaming experience. The only disadvantage is the high price, which limits its appeal.

Some users prefer the functionality of a full-size keyboard. Cloud Nine’s C989 is a superb choice because it has an ergonomic shape, and users can decide whether they want to use it as a split keyboard or a regular keyboard. By default, there’s an eight-inch cable connecting the two halves, and users can place them as close or as far as they like from each other. When the two halves are joined, they are held together by magnets and function as a single keyboard.

The C989 shares some features from the Freestyle Edge RGB. Both keyboards are available with the same Cherry MX Blue, Red, and Brown switches. They also have programmable buttons on the left side to improve gaming functionality.

The smart control dial is one unique feature of the C989. It sits on the left side of the keyboard and adds another layer of functionality. In its standard form, the dial is a volume control, but users can also configure it to switch between applications or adjust the backlighting. Since there are no dedicated media keys on the C989, the smart control dial can take its place to scroll through tracks or pause music.

One of the best things about the C989 is its ease of use. Some split keyboards have a high learning curve, but the C989 is very similar to a conventional Windows keyboard. That said, the C989 is massive, measuring 22.1 by 10.1 by 2.0 inches (LxWxH) before it’s split in half, so users will need ample desk space to use this keyboard.

Mistel’s MD600 RGB takes things in the opposite direction with a compact 60-percent design. This 62-key split keyboard gives users four layers of functionality to keep up with the C989. Apart from the default layer, there’s a fixed second layer and three programmable layers. One disadvantage is that there’s no software to program the layers, so users have to get used to doing it on the keyboard using the Fn and right Ctrl key.

The MD600 RGB has a broader range of switch options than the C989 and the Freestyle Edge RGB. It shares the Cherry MX Red, Blue, and Brown switches, and it’s also available with Cherry MX Silvers, Black, Silent Red, and Nature White alternatives.

Despite its compact size, the MD600 RGB has many practical features. Like the C989, the two halves can fit together to turn the split keyboard into a regular keyboard. It also has a USB passthrough for users to add a separate Numpad. The keycaps are also durable PBT with a double-shot design. Considering the amount of thought put into this keyboard, it’s a shame there’s no wrist rest.

Being able to choose from such a wide range of switches is the main selling point of the MD600 RGB. Its split design promotes a healthier posture, and it can work as a regular keyboard. But the MD600 RGB is complicated to set up for those used to software configuration. Being the most affordable keyboard on this list offsets some of the MD600 RGB’s drawbacks and makes it a practical choice.

Dygma’s Raise takes things to another level with its customization features. It has hot-swap functionality and comes in a wide selection of Kailh and Cherry MX switches. The Kailh options include the Speed Copper, Silver, Bronze, Brown, and Pink options. Some of the Cherry MX switches include the Brown, Red, and Blue types. If users don’t want to use the available keys, they can use the provided switch puller and add alternatives they prefer or a mix of different switches.

Apart from the switches, there are numerous other customization options on the Dygma Raise. Users can choose between black or white frames and keycaps. The keycaps are available in different languages, and users can choose between ABS or PBT varieties. Using the Bazecor software, users can configure up to ten different layers with customizable RGB lighting for each layer. All the keyboards listed here have RGB lighting, but the Dygma Raise ups the ante by having RGB strips placed underneath, creating an ambient lighting effect.

Like the C989 and MD600 RGB, the Raise also works as a split keyboard or a regular keyboard. One of the unusual features is the split spacebar. The spacebar splits into four keys, and users can reprogram the ones they don’t use. Below the space bar, there are another four programmable buttons for in-game functions.

The Dygma Raise has excellent all-around abilities, but there are a couple of disadvantages. For an ergonomic keyboard, there’s a surprising lack of adjustable feet or any way to tilt it up and down. Its high price may also restrict some buyers.

The Moonlander is a fitting name for Ergodox’s ergonomic keyboard because of its unusual appearance. Where this keyboard differs is the hinged thumb clusters on each side and the vertically aligned keys, which are different from the staggered design of most keyboards. These two features are ergonomically beneficial, although they take a while to get the hang of.

An area similar to the other keyboards on this list is the mechanical keys. Users can pick between a selection of switches, including the Cherry MX Blues and Browns and Kailh Box Red types. Like the Dygma Raise, it has hot-swap capability, so users can replace the standard switches with alternatives they prefer.

Adjustability is one of the Moonlander’s strong points. Users can easily adjust the tenting height using the legs under the keyboard or remove the legs entirely and have a flat orientation. The thumb clusters are also adjustable, and users can remove them entirely if they like.

The manufacturer knows how long it takes to learn the Moonlander layout, so a typing tutorial is included in the software. The Oryx software allows users to type and see an onscreen representation of what they’re doing on a diagram of the Moonlander.  If users want to try out new macros or add new layers, the software shows them which buttons are pressed and their effect on the keyboard’s functionality.

Split keyboards can be challenging to master, but the Moonlander makes it significantly easier by adding tutoring software. Apart from the Oryx software, the keyboard has hot-swap functionality and many other adjustability options. But the high price of the Moonlander may be a deterrent to some users. Those new to ergonomic keyboards might be better off trying less advanced alternatives like the Mistel MD600 or C989.