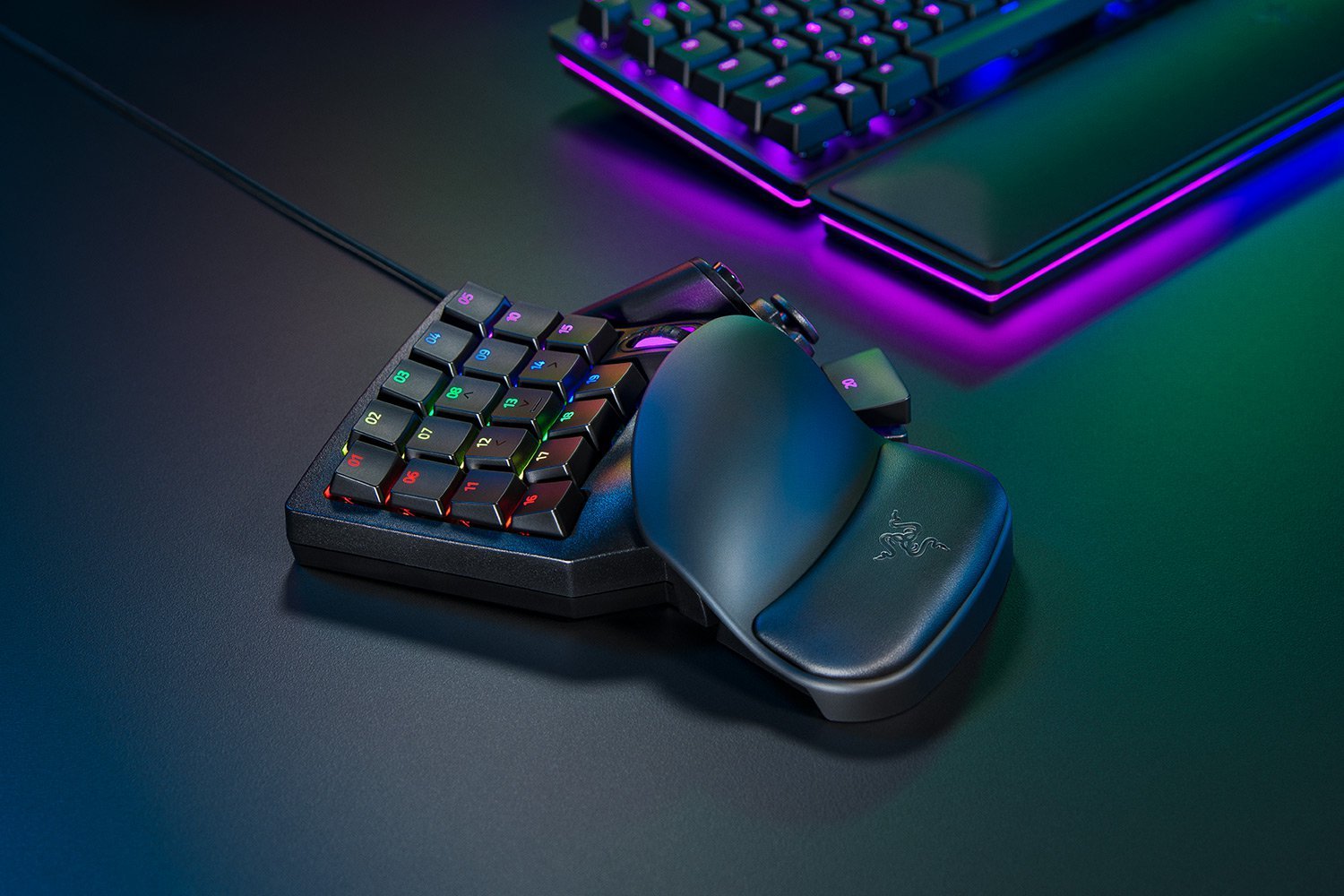 The compact size of keypads makes them convenient to use. Keypads can be easily positioned for the most comfortable angle, and many have ergonomically-placed buttons and a wrist rest. Some keypads also come with thumb-controls or scroll wheels, which add more functionality.

Despite the variety of one-handed gaming keyboards on offer, they remain a niche product for several reasons. Many one-handed keyboards require you to learn new muscle memory, and sometimes the keys have different positioning or keycap markings than standard keyboards. Since you’ll still need your regular keyboard for most PC tasks, it can sometimes be inconvenient having two devices to fulfill one role. The limited number of buttons on most one-handed keyboards isn’t ideal for certain games that have many functions like MOBAs.

These are some of the best one-handed gaming keyboards currently available.

The Razer Tartarus Pro is one of the best one-handed gaming keyboard because of its functionality. It has 19 standard keys set in a grid pattern, making them easy to reach.

The keys use Razer’s Analog Optical switches that are known for their responsiveness. When an optical switch actuates, a beam of light hits the sensor causing the keypress to be logged. This system is more responsive than conventional mechanical or membrane keys. The Analog Optical switches add another layer of functionality to the Tartarus Pro. It’s possible to configure each key for a half-press or full-press. The half-press can be mapped to one function, and the full-press can be mapped to another function. You can also configure the actuation points of the keys for better sensitivity when playing.

Another excellent feature is the ability to create multiple profiles. Users can store the macros or button mapping configuration on different profiles to match the games you play. It’s easy to cycle through the profiles using the side button on the keypad.

Apart from the conventional keys, the Razer Tartarus Pro has other tricks up its sleeve. It has a scroll wheel on the right side the user can reach with the index finger and a thumb-controlled eight-way D-pad. There’s also a large, adjustable wrist rest with ample padding to ensure a comfortable experience.

The GameSir Z1 is more affordable than the Razer Tartarus Pro but has similar functionality. It connects to PCs with a standard USB-C cable, and it has Bluetooth 4.0 to connect to Bluetooth-enabled devices. The Bluetooth connection allows users to play mobile games using the Z1, and the 2000 mAh battery has an expected life of around seven hours.

The key layout of the Z1 is user-friendly compared to the Tartarus Pro. It’s much easier to orient your fingers because the keys mimic a regular keyboard’s left side and use standard keycaps. The Shift, Caps Lock, and Tab keys are larger than the other keys and are easy to reach because of their familiar placement.

Another great feature of the Z1 is the mechanical keys. Mechanical switches are popular with gamers because of their responsiveness and feel. The GameSir Z1 comes with either Cherry MX Red or Kailh Blue switches.

Many of the features are configured using the G-Core app. The app is used to program the 29 keys and four macro keys. It can also configure the RGB lighting and set profiles.

The Gamesir Z1 is easy to use with intuitively placed buttons and a comfortable wrist rest. It’s worth checking out if you don’t need the adjustability of Razer’s optical switches.

Apart from the switches, the Tartarus V2 shares most of its features with the Pro. It has the same layout with numbered keys set in a grid pattern. Both share the scroll wheel, eight-way thumb pad, and adjustable wrist rest.

The programmable features of both Tartarus models are also similar. The Tartarus V2 uses the Razer Synapse 3 software to program the keys and macros. Razer Synapse 3 can also be used to configure the RGB lighting and set up different profiles.

Razer’s Tartarus V2 is an excellent choice if you want a one-handed gaming keyboard but don’t want to pay for the Tartarus Pro’s optical keys.

The Cooler Master ControlPad keeps things simple with a rectangular shape. There aren’t any macro buttons or D-pads cluttering up the clean look. Instead, there are 24 numbered buttons in a grid layout and two aluminum scroll wheels at the top of the keyboard that can be used as volume controls. The ControlPad uses mechanical switches, just like the Z1, and comes with either Cherry MX Red or Gateron Red variants.

One of the standout features is called Aimpad technology. Aimpad uses an infrared sensor to detect the keys’ movement, which makes these switches pressure sensitive. The pressure sensitivity gives users the ability to program keyswitch actuation points, similar to Razer’s Analog Optical switches. Adjusting the sensitivity enables the keys to emulate the analog stick on controllers.

As expected, the ControlPad stays true to Cooler Master’s superb build-quality. It comes with a detachable wrist rest with polyurethane (PU) leather padding. The keyboard and wrist rest have sturdy aluminum frames compared to the plastic frames on the other one-handed keyboards. Cooler Master also includes a forward-thinking USB-C cable.

There are a couple of disadvantages to the Cooler Master ControlPad. Some players might prefer symbols on their keys instead of just numbers. Cooler Master offers spare keycaps, but they have to be purchased separately. It’s also worth checking if the ControlPad is compatible with the games you play before paying the high price.

The NPET T20 is the most budget-friendly option on the list. It simulates the left-side of a conventional keyboard. The layout is easy to get the hang of and has larger Caps Lock, Shift, and Space Bar keys like a traditional keyboard. There are 28 programmable keys, including the function keys at the top of the keyboard. The only other buttons are the three macro buttons on the far left of the T20.

One of the reasons why the T20 is so affordable is because of the switches. Instead of using more expensive switches like the Tartarus Pro, ControlPad, and Z1, it has membrane switches. The T20 also uses a non-adjustable wrist rest. The wrist rest isn’t very comfortable because of its hard plastic design.

The NPET T20 is perfect if you want to try out a one-handed keyboard without spending a fortune.