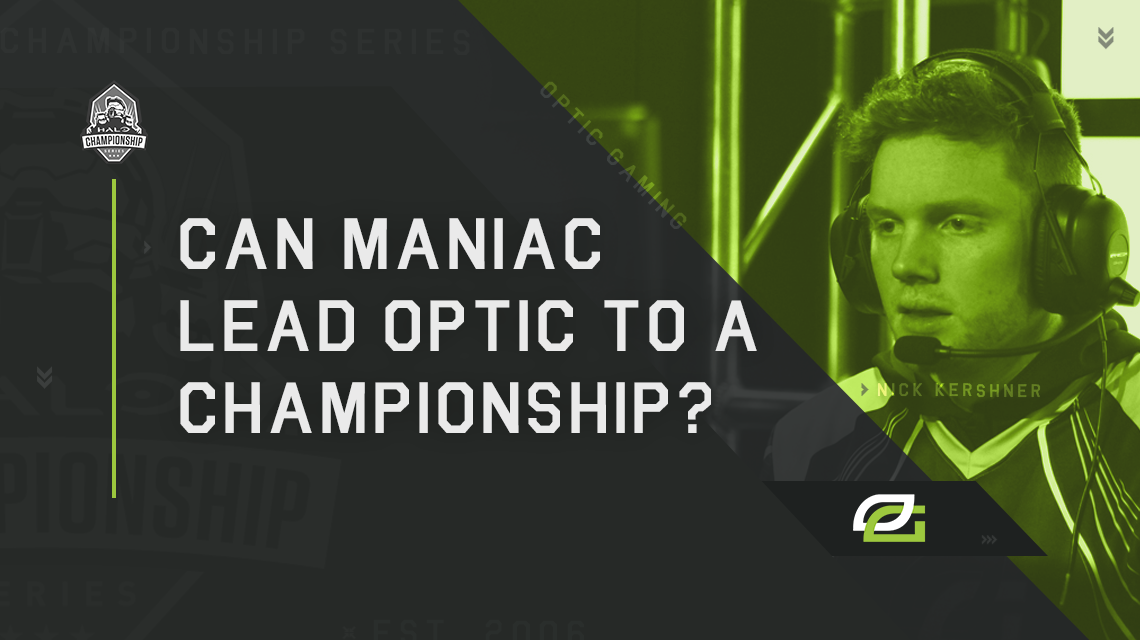 OpTic Gaming’s journey inHalo has certainly been a wild one. Several positive and negativemoments have made OpTic one of the most storied teams in the ProLeague, but a great story to tell is not what this team is lookingfor. With a new team filled with four of the most individuallytalented players in this league and with long time member and Haloveteran Nick “Maniac” Kershner being the captain, can he leadthis team to a championship?

After losing a rough series toTeam EnVyUs 3-1 yesterday, OpTic sits in seventh place in the ProLeague with a record of 2-7. This disappointing record isdefinitely one OpTic believes they can make much better, but as ofnow, improvements have yet to be seen. With little positive thingsto note about this team as of recent, many are looking at Maniacfor answers.

Two months ago, former captainand now coach of OpTic, Michael“FlameSword” Chaves, retired from competing and gavehis role of captain to Maniac. During this time, FlameSword’sdecision received a fair amount of criticism from fans since Maniacshowed several emotional lashouts on stream. Many doubtedManiac’s ability to take in all the pressure as a captainwhile leading his team to victories, making his transition arelatively stressful one.

While dealing with all thepressure, Maniac would pick up Cory “Str8Sick” Sloss as theirnew fourth, and he proved to be a very valuable asset toOpTic’s ability to slay, but frustration and losing continuedto build up. Soon after, Brett“Naded” Leonard would retire from competitiveHalo, which many believe was a smart strategy on OpTic’spart to pick up a new player. They would later pick up Bradley“APG” Laws to help add some more slayingpower to the already slay-heavy OpTic team. With a lineup thistalented, many were confident that OpTic would do well in the ProLeague.

There is no doubt in my mindthat Maniac is completely dedicated to helping this team win. Hehas spent countless hours each day practicing with his team to makethem as strong as possible, but unfortunately it has not paid offyet.

Although his commitment isthere, his in game performance is not. There have been manysituations in Pro League matches where Maniac has let down his teamby not being able to slay enough. As one of the most consistentslayers on the team, Maniac is expected to provide efficientslaying power when needed and although he can do this in scrims, heseems to be a completely different player in Pro League.Although there have been situationswhere he has shown up and performed very well in Pro Leaguematches, these performances do not happen enough times for OpTic tohave a significant advantage over a team in a match, causingseveral hard losses.

We cannot blame OpTic’slosing streak solely on Maniac but as the captain of the team andas a former champion, Maniac needs to maintain a certain level ofconsistency throughout the season if his team ever wants to comeclose to winning a championship. Maniac has done a lot of greatthings for OpTic Gaming and has really played a strong role inproviding the community with quality content, but his in-gameperformance as of late should not go unnoted, and Maniac reallyneeds to step it up if he wants to bring this team to thetop.

What do you think about Maniacleading this OpTic team to a championship? Let me know in thecomments section below.