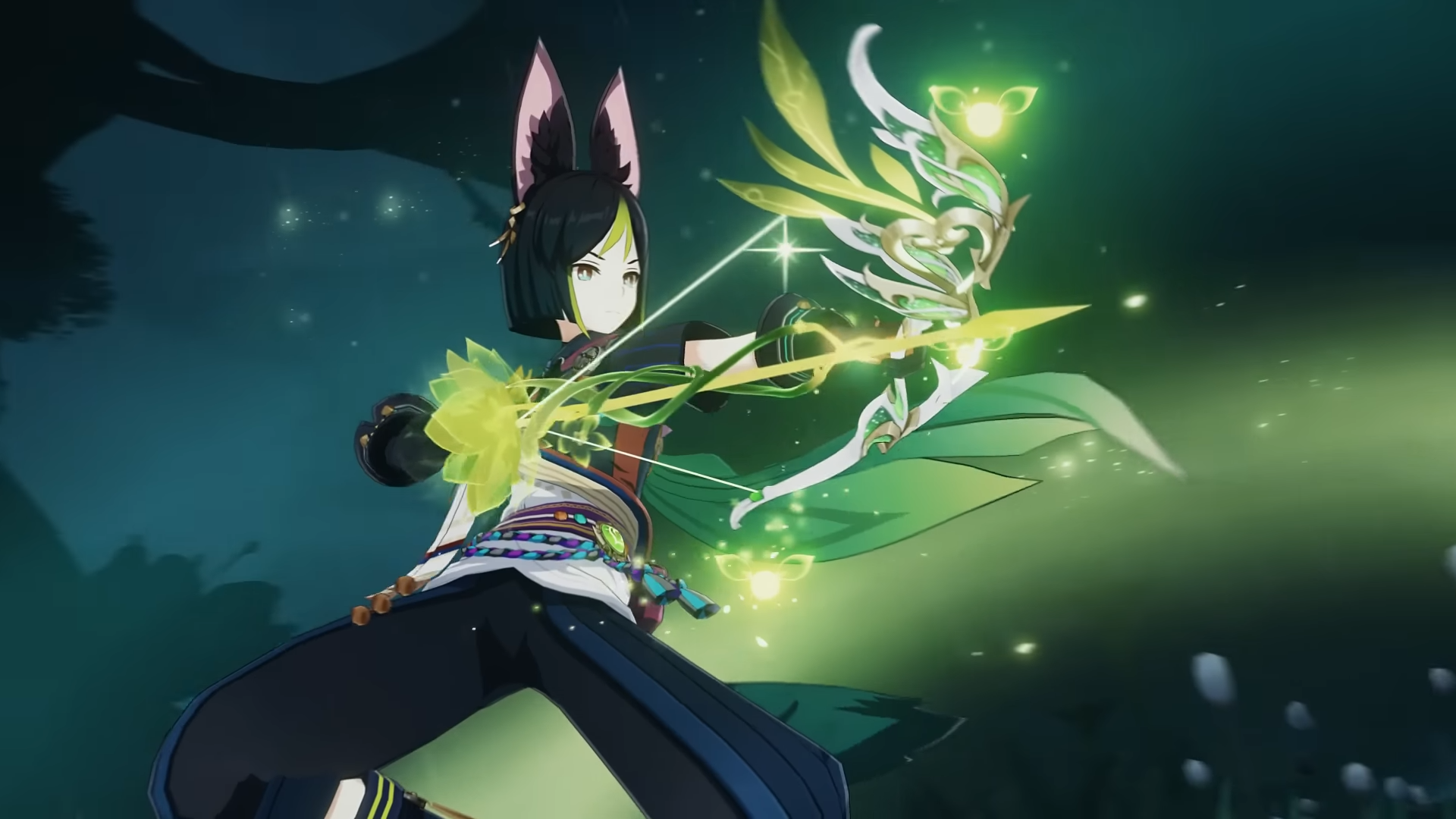 With the launch of the Version 3.0 Genshin Impact update, Dendro officially became a playable element. Of the seven elements featured in Genshin Impact, only Dendro has not featured any playable characters since the game launched in 2020.

Tighnari has made his way into Teyvat as the first official playable five-star Dendro character. He is also the first five-star character who will be added to the permanent “Wanderlust Invocation” wish banner after his initial featured run with his “Viridescent Virgil” banner in quite some time. The permanent “Wanderlust Invocation” banner only features early-game characters, so the addition of Tighnari to the banner is quite a unique one.

Tighnari is a five-star Dendro Bow character and the Forest Watcher of Avidya Forest in Sumeru. He serves to protect the forest’s ecosystem as well as those who wish to venture into the forest as it can oftentimes be dangerous.

The caring Forest Watcher is a powerful character who functions best as the primary damage dealer on a team. He is a solid secondary damage dealer, but his character is built to be the one who is on the battlefield the most and dealing the most damage.

Equipping a five-star character with a weapon that also has a five-star rating will always yield the best results. Tighnari functions best as the primary damage dealer on a team, and his weapon should thus be one that will help support and amplify his abilities in this role.

The five-star Hunter’s Path bow is the best choice for Tighnari. It has the special “At the End of the Beast-Paths” ability that grants a 12-percent elemental damage bonus.

After hitting an enemy with a charged attack, the wielder of this bow then gains the Tireless Hunt secondary effect that increases charged attack damage by 160 percent of elemental mastery. This effect is removed after 12 charged attacks or 10 seconds. One instance of Tireless Hunt may be gained every 12 seconds.

Another excellent five-star bow for Tighnari is the powerful Amos’ Bow. The “Strong-Willed” ability of this bow increases the damage dealt by normal and charged attacks by 12 percent. When players execute a normal or charged attack, this damage bonus is further increased by eight percent for every 0.1 second that an arrow is in the air for up to a maximum of five times.

This five-star bow has the special “The Parting Refrain” ability that increases elemental mastery by 60. When an elemental skill or burst dealt by the character wielding this weapon hits an enemy, they will then gain a Sigil of Remembrance. A Sigil of Remembrance can be gained once every 0.2 seconds regardless of if the character is the active one who is on the battlefield.

When the maximum of four Sigils of Remembrance have been gained, they will all be consumed and the entire party will gain the “Millennial Movement: Farewell Song” effect for 12 seconds. This effect will increase attack by 20 percent and elemental mastery by 100. When this ability has been activated, more Sigils of Memory cannot be gained for 20 seconds.

Players can never go wrong with the five-star Skyward set. The “Echoing Ballad” ability of this bow increases critical damage by 20 percent. Every hit done with this bow also has a 60 percent chance to initiate an area of effect attack that will then deal 125 percent physical attack damage. This ability may only trigger once every four seconds.

A great four-star option for Tighnari is the King’s Squire bow. The “Labyrinth Lord’s Instruction” ability of this weapon increases elemental mastery by 60 for 12 seconds after an elemental skill or burst has been used. This lasts either the full 12 seconds or until players switch characters if that occurs sooner.

When this effect ends, 100 percent of attack will then be dealt as damage to one enemy who is nearby. This ability can be activated once every 20 seconds.

Because he is meant to function as the primary damage dealer on any team, Tighnari’s artifacts should thus be ones that will build his damage output abilities.

The full four-piece set causes enemies’ Dendro resistance to decrease by 30 percent for eight seconds after an elemental skill or burst hits an opponent. This ability can activate regardless of whether the character that this set is equipped to is actively on the battlefield.

Another solid option is the Artifact Set that is equipped to Tighnari in the trial version of him, which is the Wanderer’s Troupe set. The two-piece set increases Elemental Mastery by 80.

The four-piece set is simple but can be effective for those who used charged attack shots often, which will likely be the case with Tighnari because his charged attack is quite powerful. It increases charged attack damage by 35 percent when the character it is equipped to utilizes a catalyst or bow.

If the full four-piece set isn’t what you’re looking for, the two-piece version of this set is still a solid option to pair alongside another one.

The two-piece Shimenawa’s Reminiscence set increases attack by 12 percent. Equipping the full four-piece set increases normal, charged, and plunging attack damage by 50 percent for 10 seconds after the character that it is equipped to casts an elemental skill.

This ability will only activate if the character has 15 or more energy and will consume 15 energy upon activation. It also cannot activate again during the 10-second duration.

All of Tighnari’s required Ascension Materials are specific to the Sumeru region. Players will need to take on Floating Fungi quite regularly for one of the Dendro character’s primary resources, which are the various levels of Fungal Spore.

Nilotpala Lotus can be found throughout Sumeru as it is a local specialty of this region. Players will find it near river banks and lakes around Sumeru. The required Majestic Hooked Beak can be obtained from the Jadeplume Terrorshroom in Sumeru, which is a fairly easy boss to take on.

Although Tighnari hails from Sumeru, players will actually need to head to Inazuma and take on the Raiden Shogun in the “End of the Oneiric Euthymia” Trounce Domain for the required The Meaning of Aeons.

To fully level up all of Tighnari’s talents, players will need to gather 1,652,500 Mora, six Fungal Spores, 22 Luminescent Pollen, 31 Crystalline Cyst Dust, three Teachings of Admonition, 21 Guide to Admonition, 38 Philosophies of Admonition, six The Meaning of Aeons, and one Crown of Insight.

Tighnari is currently available as a featured five-star character on his special “Viridescent Virgil” banner. He will be available with an increased drop rate until Sept. 9, at which point he will move to the permanent “Wanderlust Invocation” banner.