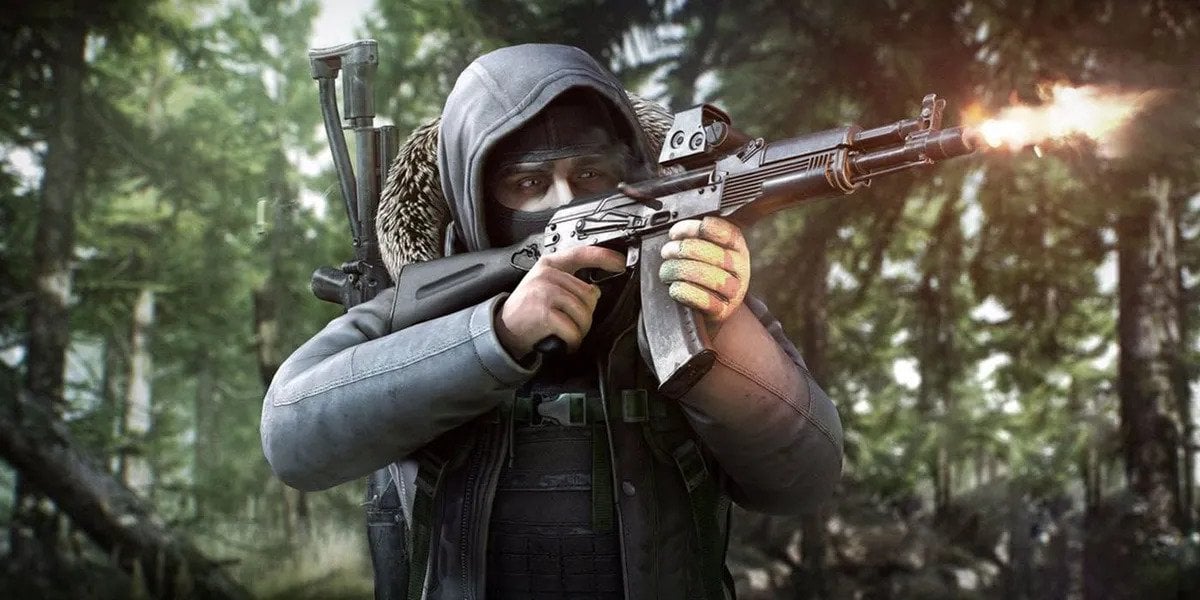 Escape from Tarkov is a multiplayer first-person shooter game developed by Battlestate Games. The game focuses on the fictional region of Norvinsk where there is a war brewing between two factions. Players can join either faction to take the other out, either with or against bots and other people.

Escape from Tarkov provides players with a lot of weapon choices making for varied gameplay. We will be showcasing the top 10 weapons in the game and ranking them from worst to best. None of these weapons are objectively bad, but we are aware that personal preferences may vary based on experience.

Bringing up the rear is the humble AK-M. It is one of the few guns to remain highly effective from the day of its inception till the present times. An unmodded AK-M can fire well-placed shots with its powerful ammo to take out enemies from a distance as well as a close range with its fully automatic mode.

The AK-M has a terrible recoil rate which can thankfully be brought down with mods and a higher recoil control skill. Its 7.62×39 BP rounds are capable of piercing even highly armored targets, making short work of a variety of enemies.

To top it off, the AK-M is a budget-friendly, jack-of-all-trades option that can effectively be used in long-range and close-quarters combat, but its average stats make it mediocre in each of these situations, landing it in our lowest spot.

The DVL-10 is the perfect weapon for players that prefer a stealthier approach to take out their targets. Its long-range prowess is unmatched and to add to the stealth factor, it comes with a built-in silencer. Adding to that, give the weapon access to some of the most potent ammo in the game and you have a monster on your hands.

If there was a downside to the DVL-10, it is that the gun is not very customizable. While this sounds like a bad thing, it can be a blessing in disguise because it makes the weapon ready to use right out of the box with just an optic at the minimum. The downside, however, is that the weapon at its base is the best that it can get.

Nevertheless, the DVL-10 is still the best weapon at what it does, making it ideal to bring into long-range maps.

The MP7A2 is quite possibly the best weapon for players that prefer the fast-paced, close-ranged style of gameplay. Widely considered to be the best submachine gun in the game, the MP7A2 is devastating and almost unmatched within its range. It has a terrifying 950 RPM rate of fire combined with ammo capable of piercing the toughest armor the game has to offer.

The MP7A2 also uses its small size quite effectively, seeing as how bigger weapons are easier to get blocked on walls or other types of cover. Though, with all of its strengths, the smaller size of the weapon also means it has a smaller magazine size. This aspect in combination with its low range and below-average damage on its best rounds makes it one of the worst choices in specific conditions. It is still almost unmatched in close-quarters combat, however.

The SA-58 is a weapon considered to be unstoppable in the right hands. The power of this weapon along with its high fire rate makes it quite dangerous to encounter. The only drawback of this weapon, getting it to this spot on the list is its atrocious recoil rate. This weapon is even stronger when switched to fully automatic mode but that also makes the recoil worse than it already is.

Even though there are some glaring weaknesses, they can be made into strengths using mods. Once the recoil issue is reduced or even properly controlled, the SA-58 ends up as the best jack of all trades weapon in the game. To make it even more dangerous, it is one of two guns that shoot 7.62×51 NATO rounds, which are one of the most powerful ammo types in the game.

As such, the SA-58 should always be modded to cover for its weaknesses and it can function as a gun that shreds everything and everyone it goes up against. With the right amount of investment, this chaotic weapon turns into a proper killing machine.

Arguably the best semi-automatic in the game, the M1A is a beast in battle. It can be modified in several different ways, making it versatile and perfect for different playstyles. It can be fitted with a long-range optic for long-range kills as well as a canted sight for close-range battles.

The M1A also has access to some of the best ammo in the game which is coupled with a high rate of fire, making it a monster to a variety of enemies. For this high rate of fire and high damage, the gun has a fair amount of recoil. This can be balanced out by using mods to reduce the recoil rate.

The M1A is great on all maps but it shines especially brighter in locations with a good mix of tight corners and large open areas. This helps the unpredictability that M1A users love to exploit, making it a difficult fight for their opponents to predict because the fight can either be battled at long-range or short-range with ease.

The top five weapons in this game can be used interchangeably by most players because of their viability in the game. But in our opinion, the fifth place spot goes to the SVDS, a powerful rifle in the right hands, or in any hands really, because of how inherently effective the gun is.

Earlier, the Mosin was considered for this spot. But for how strong the weapon was, it also got equally nerfed to the point where we are now. Due to this, the SVDS stepped up as a more viable choice and players quickly learned how much better this weapon can be. It may have been a bit more expensive than the Mosin as well, but for the added price, it provided a lot more benefits over the older choice.

The SVDS has a much higher rate of fire and has a larger magazine. This in addition to the easily moddable aspect of the gun makes it an all-around perfect choice for all kinds of playstyles. For being semi-automatic, it also deals a high amount of damage to the chest with a variety of ammo types, making it a versatile weapon.

Sitting at a well-deserved spot on this list, the AK-74N is the most powerful of the AK variants in the game. It has immensely lesser recoil compared to its other AK brothers in the game and it also has the highest rate of armor penetration of any assault rifle.

Adding to its low recoil are the rounds it uses, the 5.45×39 caliber rounds make it so that the weapon is sustainable in a long firefight. It uses a 60-round magazine, adding to the effectiveness of its sustainable playstyle. These aspects make the AK-74N the most versatile pick of all of the AK variants. Even though there are better weapons, it is one of the more reliable ones to have in a pinch, good against single targets and squads alike.

Getting to the top three weapons in the game, the bronze medal goes to the AS Val. While the gun is powerful in its own right, it is known for being one of the more versatile weapons that doesn’t need any mods to be effective. One of its greatest selling points is the fact that it has one of the best recoil rates in the game across all weapon types.

It also has some of the best ammo types in the game, with most of the ammo available for the AS Val being armor piercing rounds. Its high rate of fire, which goes up to 900 RPM, and armor reduction go hand-in-hand making it one of the most devastating weapons for players to fight against. The AS Val also performs amazingly well in all ranges from short-range to long-range, although not as well as the two best choices in the game.

The HK-416A5 would be the best weapon in this game if not beaten out by our No. 1 pick, but holding this position is no easy feat either. Although it might not have the best recoil rates of other weapons of this type, it has the advantage of having a much higher rate of fire. This is excellent when it comes to short-range and mid-range battles, which account for the majority of these kinds of fights.

The HK-416A5 also has the best in slot recoil, large magazines, and some of the best ammo the game has to offer, making it potentially the best pick in the game if not for one other.

Our top pick for the best weapon in Escape from Tarkov is the Colt M4A1. Apart from having a better recoil rate than the HK-416A5, it also has the lowest possible recoil throughout all calibers of rifles. It utilizes the best standard ammo as well as the best budget ammo the game has to offer. Adding to that, the weapon can be modded to suit a variety of playstyles ranging from long-range rifles to short-range SMGs.

The Colt M4A1 uses 60-round magazines, giving it one of the best squad wipe capabilities as well, making it the best weapon in the game.