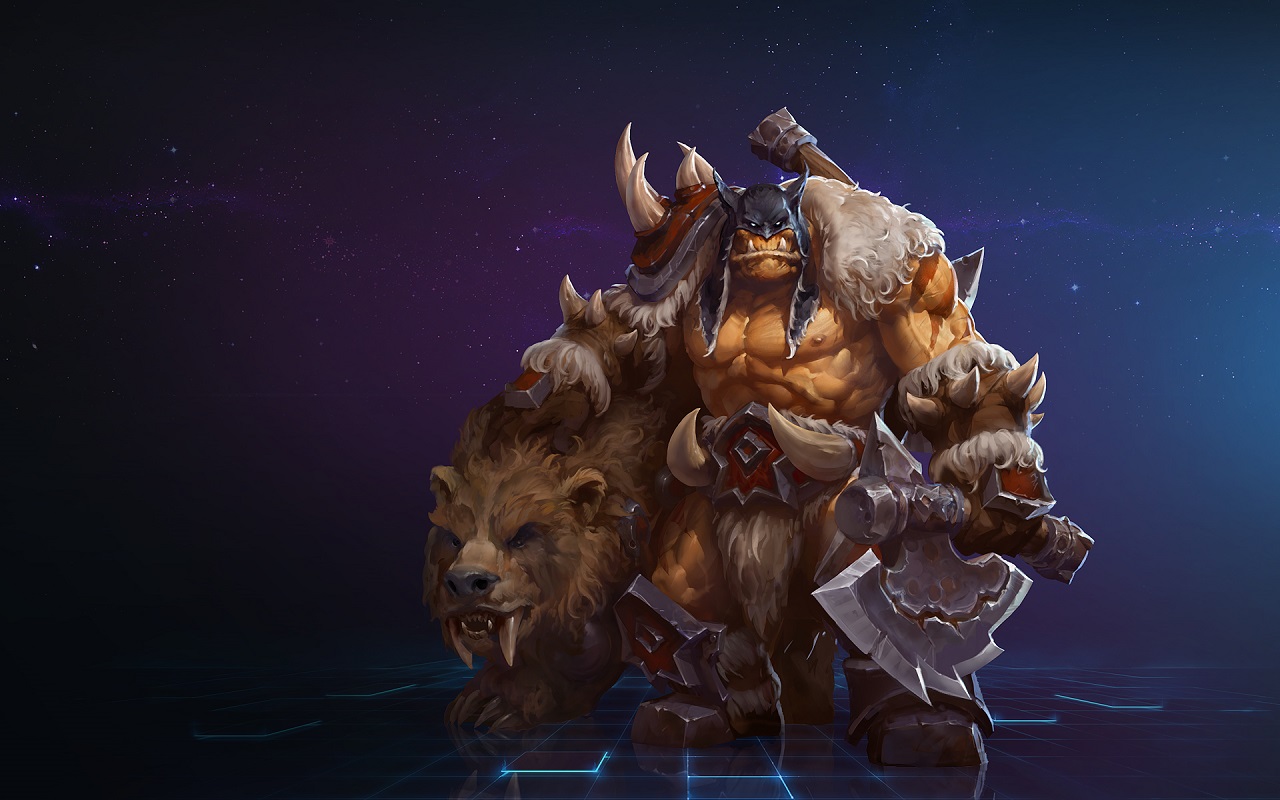 Blizzard latest Heroes of the Storm character isn’t dominating games like the same way other new entrants did.

The iconic half-orc, half-ogre hero from Warcraft, Rexxar, enters the nexus with his companion bear Misha and a kit that takes advantage of his relationship with animals. The hunter character is the game’s first ranged “Warrior,” the label Blizzard gives tank styled characters in-game.

Instead of tanking foes himself, Rexxar send his trusty bear Misha to take damage for him. He can heal Misha and send her to charge and stun foes, supporting her by firing a slowing hawk or with a heroic like Bestial Wrath, a massive damage buff straight from the World of Warcraft Hunter’s beast mastery specialization, or Unleash the Boars, which is pretty self explanatory.

Many new heroes dominate the game’s ladder, but Rexxar isn’t one of them. When Kael’Thas was released, for example, his ability to slay foes in a fiery inferno saw him winning games at a meteoric rate. The most recently released hero before Rexxar, the Skeleton King, Leoric, sits atop the win rate statistics on tracking site Hotslogs by winning 57 percent of his games, more than any other hero.

Rexxar is a Warrior like Leoric, another potential participant in a metagame that’s increasingly featuring beefy bruisers who can take damage as they dish it out. But one day after his release, Rexxar’s win rate sits at 41.1 percent in nearly 3,000 games played, worse than all but two heroes—fellow Warriors Stitches and Diablo.

There are a couple reasons for that. As seen with his fellow basement dwellers, some Warriors just don’t work in the current meta, or are more effective in a pro game. Korean team MVP Black, for example, can pick Arthas and Elite Tauren Chieftain with Leoric and still win. But in public games, a single Warrior is much more effective, and characters like Leoric with his beefiness and damage and Johanna with her wave clear and control work better.

Plus, Rexxar is tough to play in many ways. His central mechanic—a ranged Warrior who tanks with a minion, his bear Misha—makes him awkward in a battle arena game, especially with the control options implemented by Blizzard. Players control Misha using two stances aptly named “Misha, Attack!” and “Misha, Follow!” instead of by directly microing her. That may make Rexxar play more like a hunter with a valuable companion with a mind of its own, but it doesn’t give the Warrior the ability to do what he needs to to remain competitive.

Body blocking is an integral part of Warrior play in Heroes. Making minute movements to prevent enemy players from reaching your squishies is what separate an average player from a great one, and Misha is inadequate in that role because players don’t have the ability to perfectly position her.

Plus, there’s some quirks that make utilizing her downright annoying. For example, when running away from a fight, there’s no way to keep Misha attacking an enemy while moving Rexxar away. Sometimes, Misha will even run ahead and block her companion, leading to a grisly death.

Rexxar probably plays better as a bruiser. He’s basically a disruptive ranged character with a bear that’s basically extra crowd control. As a solo tank, he’s inadequate at the moment due to the difficulty controlling Misha.

Rexxar probably needs a quality-of-life change at the moment considering how Blizzard has handled Misha’s AI. That could mean scrapping it and giving players more control, say by using the trait button as an attack/move command key or letting them click-to-control Misha herself. It could even just take some small updates. A simple change to the AI of Anub’Arak’s beetles, making them hone in on enemy champions, moved him from a bottom-tier Warrior into a top-tier terror.

Whatever happens, it’s clear Heroes’ newest champion could use a little help. Players will likely get better at making Misha do as she’s told, but even complicated and mechanics-heavy heroes like The Lost Vikings did not see their win rates climb significantly after players became more familiar with them.

Still, for fans of Warcraft 3, getting your hands on Rexxar again is awesome, even if Misha can be a little too stubborn.