The Lands Between is a formidable realm not for the faint of heart. Full of strong enemies and even stronger bosses, Elden Ring players are faced with many challenges that may require a change of tactics. Different weapons and spells may be more suitable in specific areas than in others. But with the different stat requirements across the many combat tools at the player’s disposal, how does one use a weapon they don’t have the stats for?

Luckily, FromSoftware created a way for players to change their character’s attributes. Similar to previous FromSoft titles, the Larval Tear system in Elden Ring allows players to redistribute the levels they’ve accumulated. Players can respec to change combat tactics or simply to use the awesome weapons they just found in Elden Ring.

What are Larval Tears?

Larval Tears are a key item in Elden Ring and are given to Rennala, the Queen of the Full Moon, for rebirth. This rebirth system is how players can respec their stats and abilities to use different weapons or combat styles. 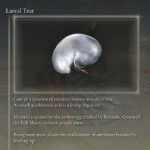 Where to find them

Larval Tears can be found in many places in the Lands Between. Players will likely stumble upon a good handful of them as they adventure and explore the different areas in the game.

Here are some ways players can get Larval Tears:

Obtaining these tears has much to do with deception and mimicry, killing enemies disguised as something else. FromSoftware gives players many opportunities to respec their characters by placing a healthy amount of Larval Tears throughout the game. So don’t be afraid to use the tears as much as you want. There are a lot of them.