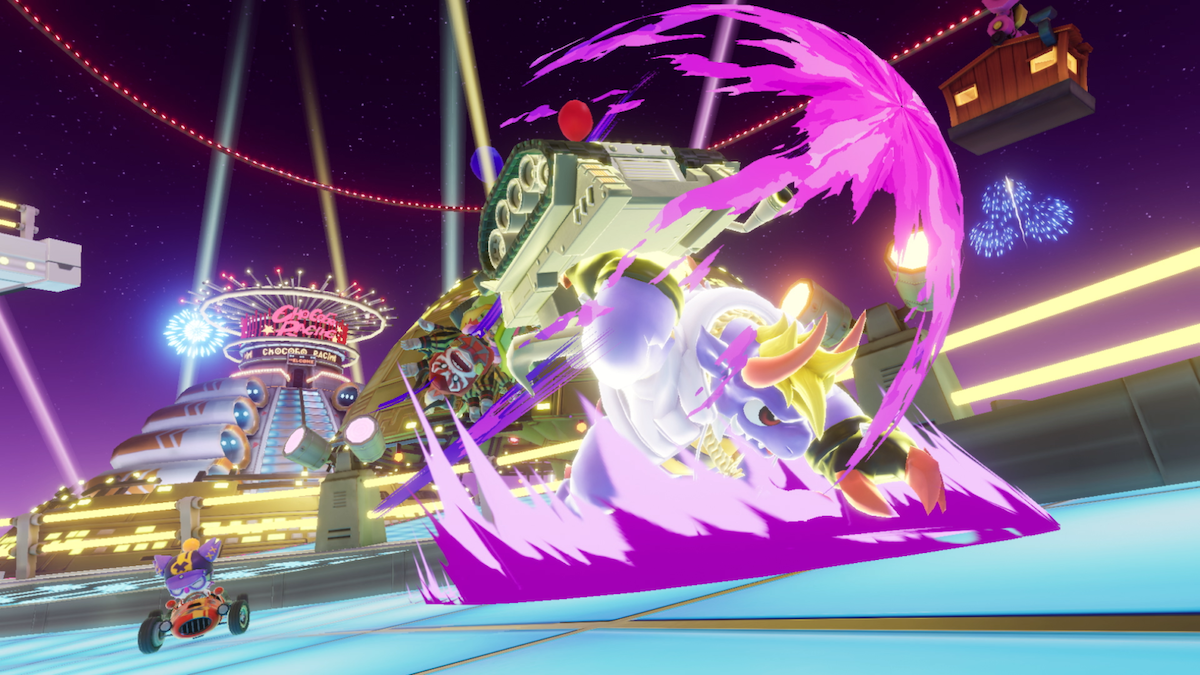 The racing game has already captured the hearts of many Final Fantasy and Mario Kart lovers for its wide variety of characters and multiplayer functions that make racers come back for more.

But for some, the hesitation of buying Chocobo GP, only to realize your favorite Square Enix character might not be in the game is one that could dishearten any gamer. With an onslaught of different characters available at the helms, as well as two unlockable characters that are hidden to players, these are all the characters in Chocobo GP, as well as all the abilities that make each individual racer unique.

All characters in Chocobo GP and how their abilities work

The titular character of the Square Enix kart racer, Chocobo, has the ability Chocobo Dash. This ability allows his kart to gain a speed boost. However, just make sure no racers are within the vicinity of you when using this because this ability leaves rings behind that allow other racers to gain that speed boost when they pass through them.

The Final Fantasy character rides the Tsunami kart and has an ability that allows her to ride on waves in a boosted state. Players that come into contact with her are damaged while the player can dictate the direction of the tsunami itself. The tsunami is a morphed version of Leviathan from Final Fantasy.

Ben features the ability Charge. This increases Ben’s size to a point where he starts running on the track with a speed boost and the ability to damage any opponent that touches him.

Atla’s ability is Pom-Pom Crystal which allows her to steal crystals from other characters if they are ahead of her. Similar to Chocobo, she leaves things behind when this ability is used, in her case it is crystals. But unlike Chocobo’s rings which increase speed, Atla’s crystals are fake. Anyone who touches these fake crystals will take damage so avoid them at all costs.

Camilla features the Chocobo Boost ability, a variation of the Chocobo dash. This ability creates five rings around the tracks where she will gain invincibility and a speed boost if she is able to drive through one of these rings. Like Chocobo’s ability, other racers can benefit from these rings too.

He features the ability Plow Down, which enlarges his kart and creates two plows on both sides of the kart. He also gains a boost that makes him invincible for a brief period of time, and damages any unit that these plows touch. They also leave water puddles behind that damage karts, causing them to skid if hit.

A staple to the Final Fantasy series, Cid features the ability Three-Shot-Burst which fires shots at other racers from his tank kart. The direction of these shots will be chosen when the ability is activated and will dictate whether these shots go forward or backward.

Claire’s ability is Invisihood which makes her invisible to where she cannot be targeted by magicite or character abilities. This is a powerful ability that can be used against people waiting for the final lap to use their abilities.

Ifrit’s ability, Hellfire, allows Ifrit to create a wall of fire that damages all karts that come into contact with him. An ability that allows Ifrit to brute force his way through his competitors, stay clear of Hellfire or you will get burned.

Gilgamesh’s ability, Sword Saint, throws several swords onto the track and anyone hit by them will take damage. The amount of damage one takes is all dependent on the type of sword that hits them, so stand clear of Gilgamesh’s swords or you could have your race completely ruined.

His Chaos Wave ability puts Maduin in a boosted state. In this boosted state, he and his kart are adjusted into a straight line of drive and any foes hit by him will take damage.

The robotic counterpart to the series’ main character, Mecha Chocobo’s ability is titled Berserk Mode. In this mode, he unleashes artillery directly in front of his kart and uses an area-of-effect blast that damages any karts within this vicinity.

Racing Hero X’s ability is Mog Beam X. With this ability, he fires a massive beam-like wall that can either go forwards or backward. When it goes forward, it damages any foes ahead of him while shots fired backward block any possible attacks coming Racing Hero X’s way while simultaneously damaging the enemy karts. Racing Hero X is great for anyone who prefers a more defense-based approach to maintaining their lead in a race.

Ramuh’s Judgement Bolt creates a cloud of thunder that tracks racers nearby and hits them with a thunderbolt. This thunderbolt causes them to wipe out.

Her Kurukuru Counter ability creates a powerful magical barrier that counters any magicite that hits her while the ability is active. So if you are trying to stop Shirma, make sure she no longer has her Kurukuru Counter or you might get those hits right back at you.

Shiva’s ability Diamond Dust freezes nearby racers and prevents them from being able to drift, cast magicite, or use character abilities. A popular summon from the Final Fantasy series, Shiva plans to stun her racers en route to a first-place finish.

Steiner’s ability Moonlight Slash utilizes the sword concepts that Gilgamesh uses with his Sword Saint ability with one major difference. Steiner uses one singular sword to slash nearby racers. This motion will continue no matter who he hits throughout the duration of this time as he hacks and slashes his way to the finish line with brute force.

Her ability is called Whispering Wind and it allows Sylph to create majestic whirlwinds. These whirlwinds through this Whispering Wind ability slow down other racers and make their turning mechanics harder to execute, creating a perfect opportunity for Sylph to catapult ahead of her opponents.

Terra’s ability is Magitek Missile and it allows her to summon five gigantic missiles. These missiles launch in only one direction forward, but they damage anyone in their path. So Terra players should try and utilize this ability to make late-race runs to catch up to the pack instead of starting the race in first place throughout.

Titan’s ability Gaia’s Wrath creates a harrowing shockwave that damages any nearby racers. Not only does Titan feature this damaging area-of-effect ability with Gaia’s Wrath, but he is also able to create a rock pillar on the track in front of any racer. This ability can only be used forward.

Vivi’s DBL Black ability allows her to use two magicite spells simultaneously. These magicite spells are high-ranked spells that vary depending on the direction when the ability is used. This is controllable by the player.

Chocobo GP features two playable characters that are unlocked once you complete the game’s story mode. These are the two characters that unlock once the main story is completed.

Necroshell is the first of two unlockable characters and features the ability Spinning Smash. With this ability, he creates a barrier that protects him from any oncoming magicite.

Cactuar’s ability is Giant 1000 Needles. This ability fires thousands of damaging needles that hurt any racers nearby the attack. Simultaneously, this also propels Cactuar forward in a boosted state to jump past racers for that tight photo finish for first.

More Characters to come over time

This cast of 25 characters is just the base of what is available in the game. The developers have already stated that there will be more characters coming to the game as Downloadable Content. Square Enix will also provide each player with 800 Mythril, which is equivalent to one prize pass, for a short period of time as a login bonus for Season One.

This money will be able to be used to acquire the first prize pass of Cloud from Final Fantasy VII and features the ability Spinning Slash. This ability utilizes Cloud’s signature Buster Sword to deal damage to racers close to Cloud as he spins his sword.

So, if you want to play as one of Final Fantasy’s most beloved characters, make sure to get the game soon so you can get him for just logging into the game.