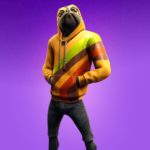 If you love animals as much as you love Fortnite, you may naturally want to represent that affection in the game. Epic Games releases countless new skins every season, and there are more than a few based on all kinds of animals.

From fish to dogs, the skin collection of Fortnite is filled with nothing but options. You may not have access to all of them at all times, however, since the Fortnite in-game shop is constantly in a daily rotation. This means that no skin is available forever in the shop, and you may need to wait a while before the skin you’d like to buy becomes available for purchase again.

Checking the daily shop online or logging into the game to see what’s up for grabs every day should be enough if you know what you’re looking for. The following animal skins separated themselves from the competition through community votes, and you might want to keep some V-Bucks ready in case they get listed on the daily shop tomorrow.

While most of them will have a chance of appearing in the shop, some won’t be available ever since they were introduced as battle pass tier rewards. Occasionally, Epic introduces reworked versions of these skins, making it the only possible way of snatching a copy for your collection.

With Chapter Two, season three, Epic added sharks to the game, making the open waters slightly dangerous to explore. Depending on the current season, there may still be sharks at some part of the map, and you can blend in with the Chomp Sr. skin.

This skin features a man in a shark costume with flippers. While you can try out scaring your squadmates by swimming towards them, note that most players’ first instinct will be shooting the sharks.

Chomp Sr. is of legendary rarity, and it’ll cost you 2,000 V-Bucks to unlock it. The skin usually appears in the shop during the spring and summer seasons.

If any skin was born to play Fortnite, it’d be this cute little chicklet. It looks to be so in a rush that it still has some eggshells on its body. The military dog tags do an excellent job of completing the look and add a bit of braveness into Cluck.

Cluck was a battle pass reward during Fortnite’s Chapter Two, season six, and players won’t be able to obtain it again. Epic loves re-releasing skins with different takes, however, just like how it did with Meowscles and Kit.

Released during a Valentine’s Day event, Cuddle Team Leader is one of the more iconic skins in Fortnite. It’s a pink teddy bear costume, and there have been multiple iterations of the skin. The mecha and the panda versions of Cuddle Team Leader are also quite popular. 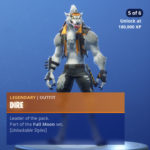 Half-wolf, half-man, Dire is the skin all Teen Wolf fans will want to add to their collection. They won’t be able to do so, however, since the skin was a part of the sixth season’s battle pass.

It features a total of six styles and Dire completely transforms into a werewolf, starting with the third tier.

Released in 2019, Doggo is one of the prime candidates to be the best boy in Fortnite. Though it has a small competition, none can top Doggo’s goofy looks. The base version of Doggo rocks a simple hoodie while there’s also a Christmas and a police-themed Doggo.

Doggo frequently visits the shop with its 1,500 V-Buck price tag, and it also comes with a cute backbling featuring a food bowl.

Toward the later stages of a match, you’ll often find yourself hopping around from building to building, trying to claim walls in box fights. While Dutch won’t make you jump higher, this scary-looking bunny can help you show that you mean business.

Dutch is one of the newer and cheaper skins on our list since it was released in the 2021 Easter event with a price tag of 1,200 V-Bucks. Dutch also includes two more additional styles, which change its fur and suit colors.

The PlayStation exclusive, Ratchet & Clank, features an excellent narrative that doesn’t leave any boxes unchecked. Fans of the franchise may still wonder what the game’s furry main character might be up to these days, though. It looks like Ratchet may have decided to learn how to play Fortnite since Fennix looks just like him.

Costing 1,200 V-Bucks, Fennix was released in 2019, and it regularly becomes available for purchase.

Fishstick is potentially the most popular animal-themed skin in Fortnite. There are countless versions of skin, ranging from a frozen one to a spy.

The original version of Fishstick was introduced to Fortnite in 2018 and it has a price tag of 1,200 V-Bucks. Between the other variants of Fishstick, you may run into him for more than a few months every month in the in-game shop.

The fish are often referred to as forgetful creatures. Not many of them have a strong memory, but Leviathan looks like it’s finally ready to take on the world after all the struggles it’s been through. This evil-looking fish sports an astronaut suit, and it’s a part of the Space Explorers set.

Leviathan could be unlocked at the 44th tier of the fourth season’s battle pass, meaning it isn’t currently possible to obtain it through the shop.

Lynx doesn’t have any fur, but she looks to be a panther or some kind of cat-human hybrid. Her mecha suit gives off a Black Panther vibe. You’ll need to unlock all the styles of Lynx if you’re looking to add her tail into the equation.

Lynx was added to the game during the seventh season and it was a battle pass reward. Skins that were tier rewards generally don’t become available for purchase again, but you may want to keep an eye on any future releases that may have a similar style.

Most animal skins are just too cute to be taken seriously in Fortnite. They suddenly wake up that petting urge once you load into a game, but there are also some who are just as intimidating as they are pettable.

The Polar Patroller features what looks to be a battle-tested polar bear with enough ammunition to take down armies. The skin was released in 2019 and it regularly visits the shop with a 1,500 V-Bucks price tag.

Dinosaurs may be long gone, but they made a return in Fortnite around 2018 with the release of Rex. Featuring Jonesy in a dinosaur costume, Rex is one of the classic skins in Fortnite.

It was released during the third season of the game, and it still returns to the shop quite frequently. This legendary skin costs 2,000 V-Bucks, and it also comes with a backbling named Scaly to complete the look.