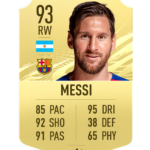 EA Sports released a list yesterday that contains the players with the highest Dribbling rating in FIFA 21.

EA has been making all sorts of lists with ratings since last week. This list of the best dribblers can help you in almost all FIFA modes, from Ultimate Team to Career Mode. The Dribbling stat includes Agility, Balance, Reactions, Ball Control, and Composure.

The best dribbler in FIFA 21 is Lionel Messi from Barcelona. The Argentinian star is the only player with 95 Dribbling and is also the best winger in the game. Messi has agreed to stay in Barcelona for one more season, so if you are a Barcelona supporter, this might be your last chance to play with Messi and Barcelona in FIFA.

Close to Messi is his former teammate Neymar from Paris Saint-Germain. The Brazilian has 94 Dribbling rating and is considered one of the best soccer players in the world alongside Messi and Cristiano Ronaldo. Neymar will be one of FIFA 21‘s most dangerous players because of his high Dribbling rating, his five-star skill moves, and weak foot.

The third best dribbler in FIFA 21 is either Eden Hazard from Real Madrid or Bernardo Silva from Manchester City. Both players have a 92 Dribbling rating, but Hazard is one overall rating above Silva in general. The Belgian is also more faster, which usually makes him a better winger in FIFA.

Here are the 20 best dribblers in FIFA 21, according to their Dribbling rating. This list won’t take into consideration cards that will be released for FIFA 21 Ultimate Team, where several new cards are added to the game mode every week.