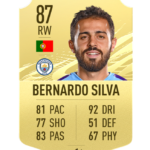 EA Sports has released the overall ratings of the 100 best players in FIFA 21, which will officially launch on Oct. 9.

This list contains the top 10 wingers (LM, RM, LW, RW) in FIFA 21. The list won’t take into consideration cards that will be released for FIFA 21 Ultimate Team, where several new cards are added to the game mode every week.

Here are the 10 best wingers in FIFA 21 that you can play with in friendly matches, Career Mode, and Ultimate Team, according to the ratings released by EA Sports today.

Few players are as consistent as Bernardo Silva on the pitch. The Portuguese player isn’t the main star on Manchester City, but he surely helps the team with his creative plays.

Bernardo Silva contributed eight goals and 10 assists during the 2019-20 season and will maintain his overall rating of 87 in FIFA 21. You can abuse skill moves when playing with the Portuguese player since his Dribbling stat is almost as high as Neymar’s.

The issue with both Kane and Son are injuries, likely because they have to play every match for Tottenham. Son has been one of the best players in FIFA throughout the years because of his powerful weak foot, which allows him to score goals with both feet. In FIFA 21, he’ll have the same overall rating (87) that he had in FIFA 20.

Jadon Sancho was one of the most desired players in the world. This has been Sancho’s life since he burst onto the scene within Borussia Dortmund in 2018-19. Many clubs from the Premier League have been trying to secure the services of the 20-year-old English player since then.

It appears, though, that Sancho will keep playing for Borussia Dortmund at least for more six months since the Germans don’t want to negotiate with him right now. Sancho has received a big rating upgrade (+3) when compared to FIFA 20 and will bolster an 87-rating card in FIFA 21.

Although Di María’s career has been surrounded by injuries and inconsistency issues in past years, he still shows up in important or decisive matches for Paris Saint-Germain more than the average player.

The Argentinian is nowhere near the level he showed during his years with Real Madrid, but he’s undeniably one of the most skilled soccer players of his generation. EA Sports has upgraded Di María’s overall rating from FIFA 20 (86) to an 87-rating card in FIFA 21. If you like to play with Paris Saint-Germain, you’ll have fun with Di María, Mbappé, and Neymar.

Has anybody developed as much as Sterling did under Pep Guardiola’s guidance in Manchester City over the last few years? No. The 25-year-old star has gone from flashing skill moves in Liverpool to scoring a lot of important goals for Manchester City.

It’s not like Sterling is an unpeccable striker, but the English player keeps getting better. In 2020, Sterling reached the mark of 100 goals with Manchester City and he was the first English player to reach this figure for the club since Dennis Tueart in 1981. Sterling will have the same overall rating than he had in FIFA 20 (88).

Hazard’s first season with Real Madrid wasn’t what everyone was hoping for. The Belgian star played in only 16 out of 38 LaLiga matches due to a severe injury to his right ankle. Karim Benzema had to step in and become Real Madrid’s best player throughout the season and help them to win LaLiga once again.

Hazard, however, was the best player on Chelsea for years and Real Madrid has faith that he’ll win matches for them as well. The Belgian was significantly downgraded in FIFA 21, though. EA has decreased his overall rating from 91 to 88.

Who’s better, Mané or Salah? It doesn’t matter for Liverpool because they have both players. Mané scored 22 goals for Liverpool during the 2019-20 season, just one less than Salah. But for several months, he was arguably the best player on Liverpool.

The 28-year-old helped Liverpool win the Premier League for the first time after 30 years and EA has certainly taken that in count for FIFA 21. The devs have upgraded Mané from an 88 to 90 overall rating in the upcoming game.

Is anybody more loved in Liverpool nowadays than Mo Salah? Well, maybe Liverpool’s head coach Jürgen Klopp is up to that task. But Salah has certainly elevated Liverpool’s game since the moment he arrived in 2017.

The Egyptian will have the same overall rating that he had in FIFA 20 (90). And apart from the three-star weak foot, he’s one of those players who can carry you to wins against your friends or the AI.

If FIFA 21 works the same way that FIFA 20 did, Neymar will be one of the best options in the game. He’s agile, can score goals with both feet, and knows all the skill moves.

The Brazilian has redeemed his prestige with Paris Saint-Germain over the last few months after nearly leaving the French team for Barcelona at the start of the 2019-20 season. Neymar helped Paris Saint-Germain reach the UEFA Champions League grand finals for the first time in the club’s history.

EA, however, will decrease Neymar’s overall rating from 92 to 91 in FIFA 21. He still looks like a great card, but watch out for his stamina.

Messi is the best player of his generation. He was nearly transferred from Barcelona after the 2019-20 season ended, though, since he wasn’t happy on the club anymore. The Argentinian, however, has opted to stay for one more season to not enter a legal dispute with Barcelona.

That said, this may be your last chance to play with Messi on Barcelona in FIFA games. Messi will have an overall rating of 93, one less than he had in FIFA 20. Enjoy it while it lasts.